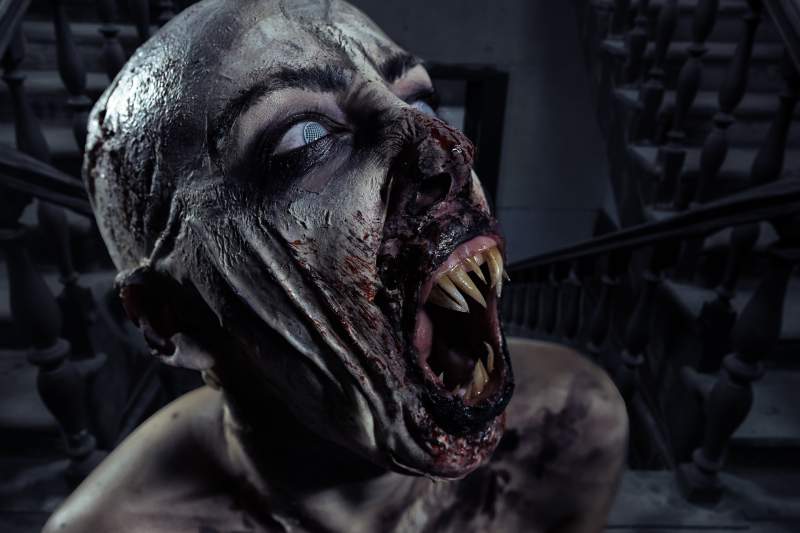 Wendigos. Legend has it a brave sacrificed himself to protect his tribe and became a monster. Others say any cannibal can become one. And a newer legend says any greedy son of a bitch becomes a Wendigo. Let’s take a closer look at this North American monster.

The Origin of Wendigos

The wendigo (pron. when-dih-go) legend has been part of Algonquin beliefs for centuries. There are two origin stories, more like conditions, for these monsters.

With the curse, people who are starving resort to eating flesh to survive a brutal winter. There’s an evil spirit in the woods that waits and watches for this to happen. Once cannibalism has started, the evil spirit takes over one person and creates the wendigo.

In another tale, a shaman transforms a young brave into a wendigo to protect his tribe from enemies. But, the tribe banishes him after he defeats the enemy. He’s left alone in the woods to die, but never does. He then creates wendigos by biting or scratching other people he encounters over the years.

Not every survivor of a wendigo attack becomes one. I didn’t find any information on why some people become wendigos and others are fine.

A few different wendigo descriptions float around the Web. For this article, let’s focus on the 3 most common:

Per Basil Johnston (a Ojibwe scholar), a wendigo has these characteristics:

While Johnston didn’t say anything about a wendigo’s height, I assume it’s as tall as the human who it was.

Overall, this description matches the classic version, but there’s one stark difference: Wendigos were giants.

They’d keep growing as they ate more victims. And they kept eating people. While a minimum height isn’t listed, I’ll assume this means it could start at 8′ and get bigger.

But, I have to say, if they got bigger than 12′ tall, then they’d be easy to find. So, I’ll say a wendigo has a height cap. However, I have no idea what that would be. If someone knows, please leave a comment with info and a source. Ok?

This gets interesting. For the first version, there’s a condition in psychology called Wendigo Psychosis.

If someone has had to revert to cannibalism, they could develop the condition and crave flesh. It doesn’t happen very often and few, if any, cases have been reported since the incident in 1907.

In the second version, anyone who shows gluttonous and greedy behavior could become a wendigo. Now, this is a modern take, so the person doesn’t try to eat flesh: They want to consume or horde material goods like money, shoes, houses, etc. These people become so fixed on their possessions and getting more, they can harm family members, friends or anyone else who gets in the way of their consumption.  Sounds like an episode of Hoarders on A&E, eh?

There are few more versions out there. The most common says the wendigo will have yellow eyes and antlers. That seems to be a more recent development.

Another version, mainly from comic books, has the wendigo look like an albino Sasquatch. The last description I found said it looked like an upright zombie elk. I don’t know about the elk thing….

Wendigos have roamed along with the Algonquins, although I did read about some links to Iroquois tribes.

Today, their territory has shrunk. You no longer find their legends along the US East Coast, nor Maritime Canada. But, the tales continue in the Great Lakes regions of the US and Canada. Specifically, you have the best chance to meet one (if you really want to) in Ontario (Sudbury to Kenora), Manitoba, Michigan’s Upper Peninsula, northern Wisconsin, and the Boundary Waters in Minnesota.

The last reported sighting happened in Roseau, Minnesota, not far from the Manitoba border.

In most descriptions, the wendigo only had a few powers, but other sources had their power set expand as they got older.

The most common powers include:

Over at Ranker.com, the author said a wendigo can cause night to happen during the day, and a wendigo could control the weather. These powers develop in very old wendigos. No other source listed these abilities, so take it with a grain of salt.

How To Stop Wendigos

It’s tough to kill a wendigo. Most of the sources for this article agreed there’s a single way to do it. Destroy their heart.

According to the legends, the monster has an ice heart that’s relatively fragile. You could stake it, shattering the heart, and that will stop it.

But it gets better (or grosser).

To really make sure the beast is dead, you have to dismember its body and burn it. Otherwise, the bugger will regenerate in time and kill again.

Wendigos have become more popular in the last 10 years. Here’s a few clips from TV shows:

Teen Wolf recap with wendigos in it.

DHWTY (Dec. 31, 2016). Be Wary of the Wendigo: A Terrifying Beast of Native American Legend with an Insatiable Hunger to Devour Mankind. Ancient-Origins.net. Retrieved from: http://www.ancient-origins.net/unexplained-phenomena/be-wary-wendigo-terrifying-beast-native-american-legend-insatiable-hunger on Dec. 9, 2017

Radford, L. (n.d.). 12 Terrifying Facts About The Wendigo And Its Dark History. Ranker.com. Retrieved from: https://www.ranker.com/list/wendigo-facts/lyra-radford on Dec. 9, 2017

One thought on “Wendigos | Cursed And Craving Flesh”