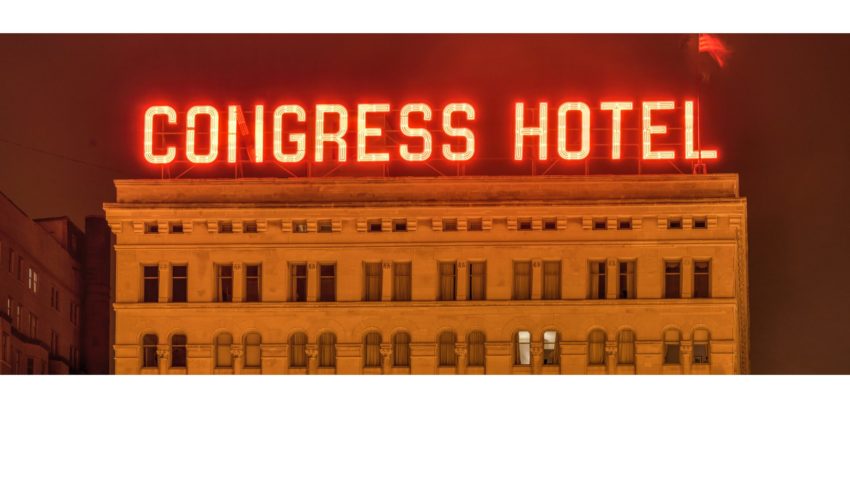 Adele Langer and her family fled the Nazi occupation of Prague, Czechoslovakia in 1939. Those events broke their family, and Adele committed a horrible crime that summer. The question is: Does she and her children haunt the 6th floor of the Congress Plaza Hotel in Chicago? Read more to find out.

Adele Langer, a middle-aged woman from Prague, opened a window and listened to the sounds of Chicago’s downtown area. She looked out over the clear night sky and a gentle, warm breeze blew in. She could see Buckingham Fountain in the distance. It was a well-lit centerpiece for Grant Park.

She walked to the bedroom where her 2 boys, Karel and Jan Misha, slept. Karel, 6-years-old, and Jan Misha, 4-and-a-half years-old, were so deep asleep, they didn’t notice their mother pick them up and move them to the window.

Adele sobbed and shook as she placed Karel on the window’s ledge. She hugged her son, said a prayer, and pushed him out. He fell thirteen floors to the pavement sidewalk below.

The crowd screamed and then Jan Misha hit the sidewalk a few moments later.

They looked up to see where the boys had fallen from. Above them, they could Adele step out, her white gown billowing in the wind, and she stepped off the ledge. Her body landed next to her boys by the corner of Michigan Avenue and Congress Parkway.

The next morning, the newspapers screamed about the murderous mother, but it faded a couple of days later. World War II news pushed the story off the front page.

The city’s coroner initiated an inquest to find out why Mrs. Langer would kill her children. But, first, he needed the father back in Chicago. Karel Langer, the elder, was in Toronto trying to secure refugee status for his family. Needless to say, the elder Karel promptly returned for a deposition 2 days after the murder-suicide.

The courthouse was packed as Mr. Langer told the story of why Adele killed herself and their sons. The Langers, a Jewish family living in Prague, had been pressured to sell their textile business and flee the Nazi occupation. The business was worth $1.5 million (or $30 million in 2021 dollars), but sold it for $7,000. They used most of that money to come to the US.

The family arrived in Chicago in early July and they settled in with relatives of Adele’s on Humboldt Avenue. Mr. Langer then got to work on securing a safe place for their family. He had visas for Bolivia and Canada, and a visitors visa for the US. The US visa would let them stay for 6 months. However, the move to Bolivia fell through as did Canada. For the US, the immigration policies changed and the Langers could not extend their visa.

Adele became depressed at the thought of returning to Prague. The family knew what was about to happen to Jewish people in the German-held countries. There was also rising antisemitism in the US, and job prospects didn’t look good because of the Great Depression. Their sons also had a difficult time adjusting to the US. They’d gone to a camp to learn English, but came home early because of poor treatment there. Additionally, the money from the business sale dwindled away.

All of these factors played into Adele’s mental health. She didn’t see many options for the family, so she checked in to the Congress Hotel, probably drugged her children, then pushed them out the window.

This story has morphed over the years. The version I’m most familiar with changes the ethnicity and religion of the Langer family.

The Langers were no longer a Jewish family fleeing Nazi-occupied Czechoslovakia. In the new version, they were a Catholic, Polish family who fled World War II. But there’s more changes as well. Mrs. Langer was now a 25-year-old mother with twin boys. She was also blonde with blue eyes. The boys’ father sent the family to live in the Congress Hotel and wait for him. Their room was on the sixth floor. However, the father never came for them. Some stories state he died fighting the invading Germans and Soviets. Others say he abandoned the family for another woman.

The outcome is still the same: A desperate-and-depressed mother pushed the boys to their deaths and then she committed suicide.

But there’s the twist. One of the boys’ bodies never made it to the morgue. It went missing. Many think this boy is the one who haunts the sixth floor of the north tower. As far as we know, it’s only one of the boys, and not Adele, that haunts the Congress Hotel today.

In reality, both boys are buried with their mother at Bohemian National Cemetery on the northwest-side of Chicago. The Czech community came together and took care of the funerals. As for the elder Karel, I didn’t find much about his plight. He was most likely deported back to Europe at the end of his visa, but I found no records to confirm this.

When it comes to hauntings, the Congress Hotel has a lot of activity. The ghostly activity associated with this legend is specific to the north tower’s sixth floor. Witnesses have reported:

In more fact-based tours, the guides correct the activity on the sixth floor and have it take place on the 12th floor. As for our experience, well, we’ve never collected any evidence on the sixth floor nor the twelfth, but we have on the eighth floor. That’s a tale for another day.

Note: Some sources used the names Adele and Adela for Mrs. Langer. Some use Karel and Karoly for the elder and younger Langer. 2 news sources claim different floors (12th vs. 13th) as well.

Historic context from FacingHistory.org, “America and The Holocaust,” retrieved from https://www.facinghistory.org/defying-nazis/america-and-holocaust on October 20, 2021