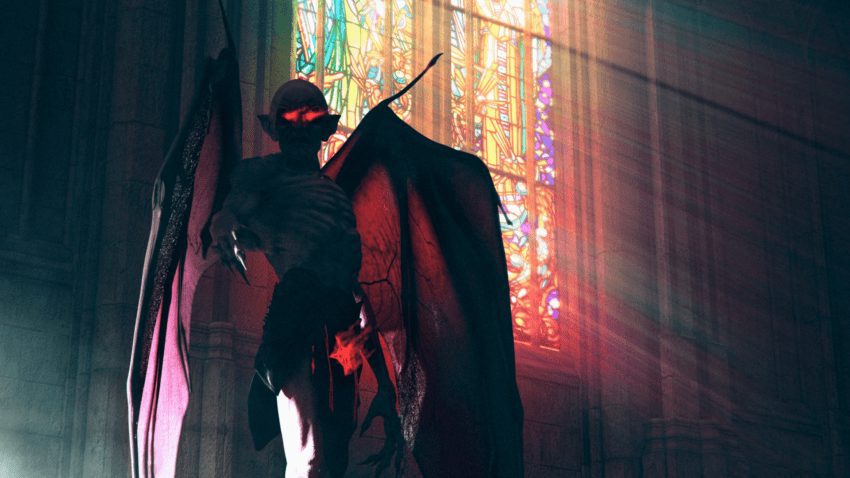 Batsquatch, long thought to be a cryptid, shows more features of a man-made monster than a zoological mutant. Get insight into why this monster is more likely a chimera after the jump.

Overall, the batsquatch is a fascinating creature with many competing features fighting for dominance. Quite frankly, it should not exist. But here we are with a man-wolf-bat-sasquatch hybrid running and flying around the Pacific Northwest.

In this article, we’ll explore this amalgamation of a monster to propose its true origins.

A Synthesis of Batsquatch Features

Overall, a batsquatch shows a variety of mammalian physiology. Some of those features don’t seem to jive with a hulking beast that can fly. Bat wings, for one, may not generate enough lift to a monster like batsquatch. There may be more to this monster than expected. Lets dive into its anatomical features and adaptations.

Most witnesses said the batsquatch stood upright or flew with its legs extended. That would mean it does not have a hock (or ankle) like canids. If it has more human-like legs, then it could walk upright for hours at a time. Animals with hocks can only stand for a few minutes. Bipedalism allows the monster to walk through dense forests, climb trees and trod through marshland.

However, some versions did have a canid ankle, which would limit its ability to run or walk on the ground. In those cases, the monster likely walks or runs on all fours. Its wings could get in the way. Perhaps the monster remains in-air or in trees to avoid this weakness?

This is the part with the most variation in witness reports. Some report the monster has a bat-like face, while other say it has a wolf-like face. If true, it lends more support for a chimera as we’ll discuss below. These details go further and state the ears match the characteristics of the nose. So, a bat nose comes with bat ears, and wolf ears come with longer snouts like any canid.

Witnesses reported the beast had a short, up-turned nose with small, fleshy ears. This indicates the most common bat head/face we see in North America. These features are associated with the big brown bat.

The more common description details a wolf snout on the head and long, pointed ears. This reminds me of a northwestern wolf (the largest subspecies of gray wolf).

The monster’s wings cause some confusion because this body part varies the most in reports. In all responses, witnesses described skin-like wings similar to a big brown bat. However, their attachment to the body could be on-arm, along the torso (like a common bat) or on-shoulder.

Physiologically speaking, it would be difficult for a monster this size to fly with these wings. Something else may help it get aloft. Bats cannot fly from the ground. This is why they drop from trees or cave ceilings. Then, the bat can beat its wings to sustain flight. Like a bat, you rarely hear it beat its wings. That seems to be the case with batsquatch, too.

Batsquatch is fully covered in a thick coat of brown or grey fur. Many wolves and bats have this fur color. It seems like batsquatch has short fur, similar to a bat.

This anatomical feature is the realm of primates, including humans and the great apes. In order to have this digit, you have to have some kind of hominid in the mix. This feature would allow a batsquatch to pick berries, fiddle with coolers, climb with ease and use tools.

We don’t know if batsquatches have these senses or adaptations that wolves, bats, sasquatch or humans may have:

Batsquatch is more likely to be a chimera based on features described by witnesses. However, there could be a twist. I would not be surprised if it’s also a simulacrum.

The main features of a batsquatch indicate a mix of hominid (human, ape or sasquatch), wolf and bat. None of these creatures mate to produce offspring in the wild obviously. It would take scientific manipulation of a creature’s DNA to combine these traits. Also, there are no reports of a colony, pack or enclave of batsquatch. This could mean the monster is grown in a lab, so only one exists at a time.

For example, the most credible sightings happened in 1980, 1994 and 2009. These are all 14 years-to-15 years apart. That could be the time it takes a batsquatch chimera to reach adulthood, or they could also be an older juvenile. For humans, 15-year-olds can reach their full adult height. This is plausible if a human were the primary DNA donor.

The Case For A Chimera-Simulacrum Organism

The simulacrum part may have a surprising source. First, the bat-like wings would not be able to get a batsquatch off the ground. Witnesses have reported the monster could leap and fly, but that seems unlikely. It would be too heavy to stay aloft near the ground. However, a mad scientist could use technology or transplant the wings from a supernatural creature.

For tech, scientists have already created technology to let heavy objects levitate or hover. The batsquatch may be a test for a new biotechnology that embeds the counter force in an animal. It’s far better to incorporate the tech during incubation or a young age to observe any side effects on tissues.

As for the supernatural wing donor, we can only speculate what kind of monster or dimension it came from. However, modern science is more likely the source. It may be as simple as growing a giant bat or incubating the wings separately. Biotech has evolved. There may be genetic manipulation that allows mad scientists to combine bat DNA to pterodactyl DNA. Presto! You’ve got giant wings to donate to a batsquatch. It would still qualify as a simulacrum, an assembly of different body parts into a new organism.