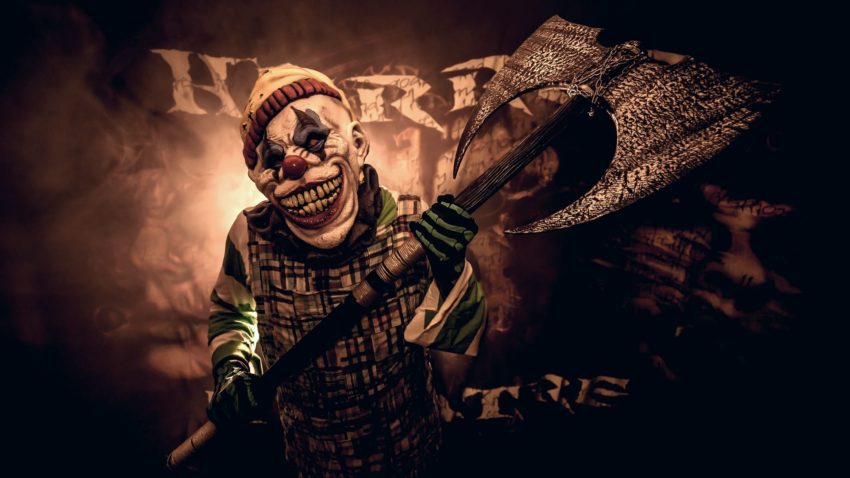 A dark circus is a twisted version of the long-time, family-friendly carnival that comes to town once every few years. It’s filled with monsters, demons and black magick users that have a limited time … to eat you. Get the scoop after the jump.

Wicked carnivals have haunted mankind for millennia. Throughout dark history, a circus arrives, enchants the town, and then the townsfolk disappear.

There’s always a reason for targeting a town as you’ll see a little later. Some say a dark circus is justice coming. Others say the townies made a deal with a devil in the past, and now it comes to collect.

Many dark circuses appear in the fall when the Veil begins to thin, but that’s not always the case. Summer is another season. The heat gets people outside, drinking, rabble rousing, and looking for fun or a fight. The heat also makes people a bit angry underneath. And negative emotions are a beacon to monsters.

When the circus leaves, you wouldn’t even know one came to town. It all disappears, including the townsfolk.

“For Tonight Only” as a Red Flag

The biggest red flag is how quickly the circus goes up. Townies don’t even know they have something coming to town until the Big Top tent and rides appear.

Magically, posters and billboards appear in the town square. Radio advertisements blast the airwaves, but no one remembers receiving them at the station.

And odd clowns lurk in alleyways.

To be frank, dark circuses just don’t pop up. They’ve got a reason for settling down in a town. That usually means the town itself has a darkness to it.

Now, time has a way of washing away the horrible events that have happened. Memories fade and town archives burn down. In many cases, the reasons include:

In other words, townies doing very bad things welcome in a dark circus.

Monsters within a Dark Circus

Everyone and everything within a dark circus is malicious. They have a short window to feast on the townies before they leave, so they want to maximize the carnage. Each performer has a specialization that helps them achieve their nefarious goals.

The ringleader is likely to be a warlock or wicked hypnotist. The crowd listens intently as they spin tales and lure the audience deeper into a trance. They may also create illusions to keep people riveted to the performers. Once the audience is fully engaged, they can’t pull away. And the carnies can take them away for rituals or “processing.” Processing means creating junk food.

Clowns best represent the monsters in a dark circus. They seem to be goofy performers with big hearts and love to hear children laugh. In dark reality, they’ve got maws with rows of shark-like teeth, and they love the taste of children, seasoned with Texas-style BBQ sauce.

Clowns tend to stay away from parents, but they’re fine with pulverizing an adult’s head. Adults get lured into a different tent at the circus to torture. Their meat isn’t succulent and tender. If you’ve had an overcooked burger at the circus, then you may have had a 40-year-old mechanic.

For the most parts, magicians aren’t the nastiest killers. They’ll still kill you, but they’re more interested in getting sacrifices to increase their black magick skills. The Ringleader relies on them to ‘clean up the mess,’ which means hide the bodies and erase memories.

Fortune tellers are similar to magicians. These are dark witches, who want to steal souls. To improve their clairvoyance, they like to have teenagers as victims. The fortune teller will make a deal with the youngster to see all the possibilities in their life. Then, they steal those possibilities and with that the person’s soul.

This set of performers isn’t necessarily monsters, but they are psychopaths. They use their skills to torture and kill the innocent visitors. During showtime, they perform amazing feats of agility, courage and physical strength. At night, they track the laggards that stick around after closing, torturing them, and then killing them.

The sideshow is where the ‘freaks’ perform. These performers are really meta-demons: Creatures from beyond the Veil that have come to revel in slaughter. Each trait gives away something about their deadly abilities. The Serpent Queen is actually a giant constrictor. The Strong Man is a golem made from stone. The Conjoined Twins have a huge mouth in their shared abdomen. These monsters are here to feed now.

Overall, the carnies (or carnival workers) are people under a spell by the Ringleader or magicians. They may have no idea they participate in killing off their neighbors. Some have willingly given themselves over, while others are coerced into it. At the end of the circus, they help hide the bodies or turn them into brauts.

What to Do if You Get Trapped at a Dark Circus?

First, don’t go alone to a random circus that pops for a weekend. Second, don’t stay after it closes for the night. When the lights on the Big Top go out, you should be in your car pulling out of the parking lot. Third, don’t eat too much candy. It can cause you to hallucinate or pass out. Then, you’re about to become a corn dog. Fourth, never make a deal with a magician or fortune teller. Fifth, never follow a clown for a special trick. Sixth, the sideshow is not something you want to see.

I guess what I’m saying is just don’t go to begin with. A dark circus has a lot of red flags involved with it. If you’re dumb enough to ignore those, then you’ve asked for your fate.

2 thoughts on “The Dark Circus | A Traveling Carnival of Terror”