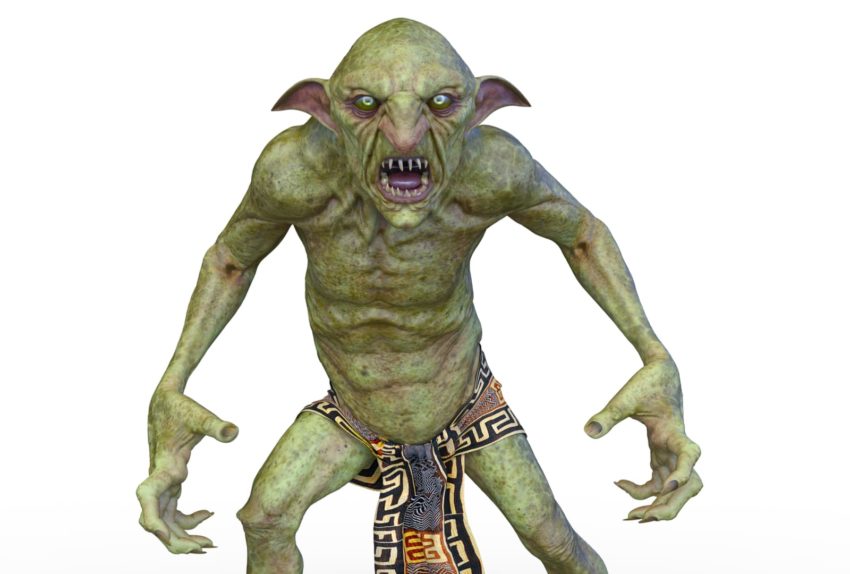 Goblins are the opposite of the fun, playful little people that help family with chores or gardening. These buggers will cut you up and barbeque you and the family dog. Get the scoop on goblins after the jump.

No one knows how fairies became goblins. Rumors state that they were once beautiful fae that let their greed, envy and anger turn them into hideous killers. These monsters are actually the most common type of fairy. They’re also known as Red Caps.

They’re also pack monsters. You can find them in groups as small as 4 or as large as a few hundred. These groups are called a malignity.

As magickal creatures like other fae, they tend to work with magick users, dark witches and necromancers. I say work because they act as enforcers, hit men or other Mafia-style agents. They get paid in flesh (as in human flesh). It’s their favorite food.

Also, goblins are the most cunning monster out there. They think independently, create tools, set traps, and coordinate attacks.

Goblins have two preferred environments, forests and old abandoned buildings. However, they can adapt to any environment. That’s one of their strengths, adaptability.

In forests, you’ll find them in the deepest, darkest, oldest parts. If there’s an ancient forest, you’ll find goblins hiding there. Waiting for a hiker to go off the path. They tend to live in burrows under the oldest trees. They may even work with wicked trees.

In abandoned buildings, goblins stick to the darkest, coldest parts. That means a basement, tunnels or hidden passageways. Since they hunt in malignity, the buildings they select tend to be big … really big. Things like mansions, old churches, warehouses and other industrial complexes. You might find them in old shopping malls, too. This is a case where urban explorers want to skip the destination.

Goblins also have a few attributes that other fairies don’t. Specifically, they have claws, needle-like teeth and they can blend in with their surroundings. It works like a chameleon’s ability. Their skin color adapts the amount of light and mimics their environment. Forest goblins will have camouflage: Goblins in abandoned buildings will be gray or black. Also, goblins can cancel sound in their immediate area. That lets them sneak up on you.

While goblins are tough buggers, they have numerous weaknesses. Goblins are susceptible to:

This just means a goblin will remain injured longer or avoid things like this. You can still harm goblins with guns, knives and poisons. But they may recover from these weapons faster than you think.

These critters don’t like extremes in temperature. Heat and cold will slow them down. From a geographic perspective, that limits their global footprint. But these monsters have been found on every continent except Antarctica. Like I said, they’re pretty adaptable.

Of course, if you chop off its head, a goblin is deader than a door nail.

What to Do if You Encounter a Goblin

Don’t go into their habitat to begin with. That’s not always possible. These monstrous fae will venture outside the forest or abandoned building if they’re starving.

You can keep one at bay with a torch or even strong flashlight. Fire and light are two things goblins avoid.

There’s also another thing you can try: Go to the grocery store and buy some fresh meat. You could offer them some beef, pork, venison or other bloody red meat to let you go.

But watch your back. Fresh human flesh is still their favorite food.