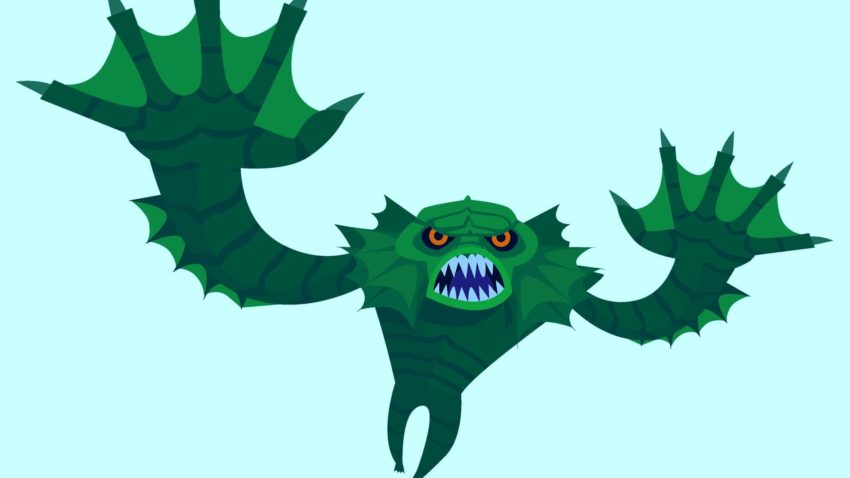 Gill-Men are amphibious monsters found in the Gulf of Mexico and Caribbean Sea. They hunt their prey in sea grass meadows not far off the coast. Humans and marlin are their favorite meals. Get more on Gill-Men after the jump.

Gill-Men are perfectly adapted to hunting in the shallow waters of the Gulf of Mexico and Caribbean Sea. They exhibit attributes common to humans, amphibians and deadly fish. It’s unclear if Gill-Men evolved or if they’re chimeras.

No matter what, they are the alpha predators in subtropical waters of the Atlantic Ocean. Not even Great White Sharks bother Gill-Men.

Gill-Men have the best attributes of amphibians. They have these special abilities:

But it’s not just amphibian traits that these aquatic monsters posses. They also have human-like attributes.

They have also adapted (or engineered?) to have key advantages of the Atlantic Ocean’s top predators like:

Gill-Men also developed some unique abilities. There include:

In general, these monsters stick to coral reefs and sea grass meadows not far off the coast of Florida and Caribbean islands. Gill-Men have been found as far inland as Lake Pontchartrain near New Orleans, Louisiana and The Everglades in Florida. You can find these monsters where marlin, bluefish, cobia, flounder, snorklers and scuba divers visit.

A Gill-Man would have to be starving or its underwater habitat threatened to see one more than a few miles inland. If you did find one, it wouldn’t stray far from a canal, river or other access point to the ocean.

Gill-Men will hunt alone or in packs of up to 6 members. If alone, the Gill-Man will likely single out the young, old or sickly types of prey. As for a pack, they’re not so hesitant to go after stronger prey.

For a monster hunting humans by itself, the creature relies on speed, surprise and efficient strikes to wound and kill its prey. First, it relies on its dark green skin to blend into a sea grass bed or the shadows of the deep. Second, it’s patient. The monster will wait until a person shows signs of struggle or negligently drifts away alone. Next, the Gill-Man gently floats up behind the unsuspecting human, then pulls its head underwater and slashes their throat in a flash. Then, it grabs its food and dives at 80 mph speed into the depths.

Most witnesses think a shark attacked the victim.

As for a pack, Gill-Men use different tactics to hunt people. They usually wait until dark and the victims are asleep. If they’re on a boat or ship, the Gill-Men use their claws to climb on board. Next, the smell to see which person(s) are the weakest or the least likely to fight. Then, one Gill-Man creates a distraction, so the remaining pack mates can use their toxin to stun the victim(s).

In general, Gill-Men don’t try to fight out of water because they lose most of their speed. They’re easier to get captured and injured.

However, if a pack is starving, they become blood-thirsty monsters and attack anything edible. It’s like the opening scene from Ghost Ship.

What to Do if You Encounter a Gill-Man

Prevent it from happening to begin with. If you’re in an area to have this sea monster, then there are some simple things to do. First, leave your bedroom lights on. Gill-Men don’t see very well during the day or with modern lighting. It blinds them. Another idea is to have something loud, like an airhorn. These monsters have very sensitive hearing. Something that generates a loud bang or whistle can hurt them and, possibly, drive them back into the water.

But if you’re out scuba diving or snorkling by yourself, it’s not going to end well.