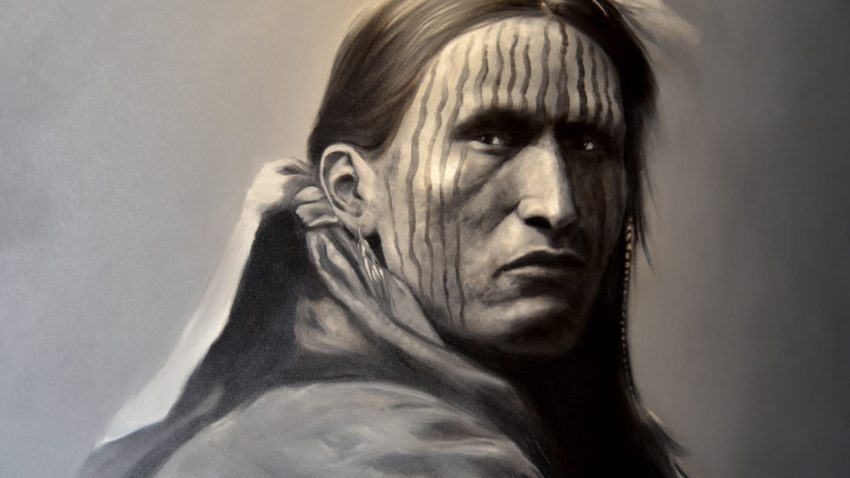 Baykoks are skeletal warriors that hunt disrespectful hunters on tribal land. These monsters move fast and kill their victims before they realize what happened.

There are multiple origin stories about the baykok.

One version says the baykok is a warrior who commits a despicable act, like killing his tribe or having incestuous relationships. He’s drowned or left in the forest to die.

In another tale, he dies a slow death by freezing and blames his tribe for abandoning him.

In Chippewa lore, a baykok is a skeletal warrior that hunts people who disrespect their lands. These could be fur trappers, hunters, fishermen that take too much catch, arsonists or the military for colonists.

For this article, I’ll focus on the warrior protecting his tribe’s land.

Soon after an offense happens, the baykok will appear. Now, it’s not clear if the warrior gets pulled back from the afterlife, or there’s a warrior’s body buried to re-animate. I wouldn’t be surprised if there’s a brave’s body buried. It would fit the wendigo description, which baykoks appear to follow.

This would also fit the classic revenant description.

When a baykok manifests or rises, it has a skeletal body with pale skin pulled taut over its bones. It can carry 3 weapons: a bow and arrow; club; and/or knife.

It has a few supernatural powers:

Its speed is legendary: It can move faster than any diving eagle. That means it’s moving at speeds close to 100 mph. It can also generate a sphere of silence. No one can hear a baykok approach and the intended victims lose their voices. All sound gets dampened in its immediate area. The baykok will never miss its target; and, it can pull its body parts back together to keep attacking. So, if you knock off an arm, it will crawl back to the body and re-attach itself.

Some tales also state it flies through the night sky, hunting other warriors, and delivering a death warning, called a shrill.

Baykoks use three techniques to take out intruders:

Bows & arrows are the most commonly used. The baykok uses its supernatural aim to shoot an arrow into the heart of its victim. It kills them instantly. A few moments after the trespasser’s death, the arrow turns to dust, fades away, and the wound seals shut. To a medical examiner, it appears the victim had an aortic rupture.

A baykok uses clubs two ways: Both of which deliver painful deaths. Using its super speed, the revenant warrior will charge its target and leap over the victim. As it leaps over the victim’s head, it will deliver a crushing blow to the back of their head. In other attack, the baykok charges, swings the club between the vicitm’s legs, and destroys the gonads. As the trespasser falls to the ground, the baykok delivers a blow to the temple. To a medical examiner, it will appear the victim died from an aneurysm. No telling what happens to the ‘nads.

The knife may be the most agonizing death. With it, the baykok approaches sleeping campers and cuts into the abdomen to steal part of the stomach. Over the next 3 days, the victim wastes away. To a medical examiner, it will look like the victim had been lost in the woods for more than 30 days.

Some tales state the baykok removes and eats the liver, killing the victim in a few hours. I wonder if it’s served with fava beans?

Overall, baykoks can be found in the historic lands of the Chippewa people. This tribe shares much in common with the Ojibwa tribe, centered around the Great Lakes, northern Ontario, Manitoba and western Quebec.

This terrains holds a great deal of fresh water lakes, so there could be a link to the wendigo and lake monster origin told by the St. Croix tribal historian on a recent episode of In Search Of Monsters. Per the historian, a revenant may rise from the lake to carry out its vengeance. Now, this tale focused on the wendigo, but there’s some connections to the baykok.

I wouldn’t be surprised if there are different baykoks to protect the land and water in the area.

We haven’t heard much about these revenants, but expect a comeback. Baykoks are the protectors of the land, and as these lands face environmental damage, they could return to exact revenge. Oil pipelines always leak and damage the area around them. Once oil gets into fresh water and aquifers, it will take decades to clean up. And that can anger the spirits protecting the land.

Let me clarify a common misconception about baykoks: To everyday joes, you may confuse a baykok with a wendigo. This resemblance is superficial. Both have skeletal bodies with pale, white skin stretched over it. That’s where the similarities end. A wendigo eats human flesh and has a ravenous hunger. Baykoks kill fast, but leave the bodies as is (for the most part). Wendigos actively hunt any prey that satisfies their hunger. Baykoks only hunt when trespassers do something disrespectful to re-animate their bodies. Baykoks use weapons; wendigos use teeth and claws.

One thought on “Baykoks | Hunting the Hunters”