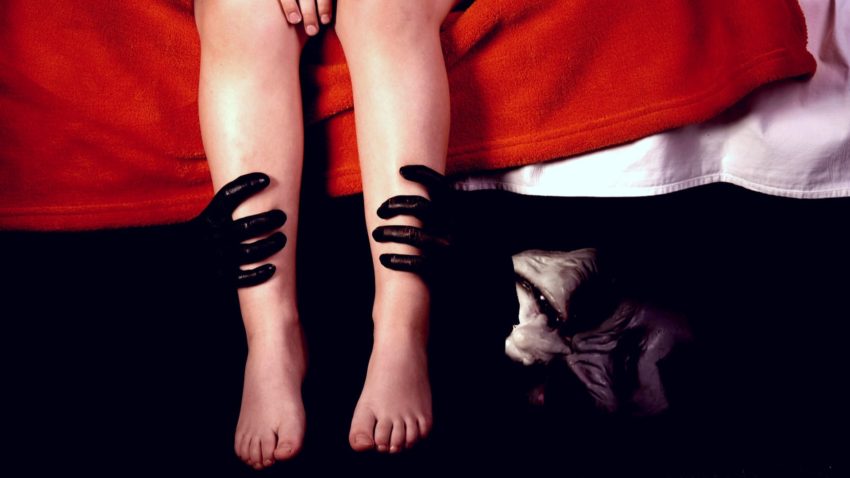 Kids fear the unknown. Their minds race with worry when they hear something but can’t see it. That’s especially true when it’s an eerie sound like scratching.

Read a scary story and explanation for monsters under the bed after the jump.

Jimmy woke up to the scratching again. Something under his bed kept clawing at the wood floors. Outside, the wind howled and the rain pelted the windows. His bedside nightlight struggled to light the room. The red, blue and orange circus figures danced across the walls and his crayon-drawn, super-hero posters.

At first, Jimmy thought the sound came from a tree branch outside his window. But the branches scraping the glass didn’t make that sound. The wet leaves sounded more like a whap on the glass.

He thought he should yell for his dad, a big, burly lumberjack of a fellow with a full, black beard and tendency to wear flannel. Daddy was never afraid of the dark. He’d go into the garage alone at night and without a flashlight. That made Daddy a tough man to Jimmy.

A bolt of lightning flashed and cracked. The power flickered and Jimmy’s nightlight went dark. He sat in the dark for a few seconds, staring around at the shadows in the corners of his room.

Jimmy turned and hung his feet off the side of his bed. He looked down at the floor. A dark hand, flicking its needly fingers, popped out and reached for his foot.

“Daaaad!” the boy with his dad’s black hair yelped. “I need you! Come get me!”

Jimmy’s dad came plodding along. Each step sounded like an elephant stomping along a wooden plank.

The door creaked open and a hulking figure appeared in the door, wearing a flannel onesie. With a flick of a switch, a flashlight sliced through the dark. Its beam coated Jimmy in a warm orange glow. The light flickered and his dad slapped the end.

“Looks like I have to change the batteries soon.”

Jimmy looked down again. The black hand with the sharp fingers was gone.

“I … I think there’s something under the bed,” Jimmy said.

“Oh really? Let me take a look,” his dad said and placed the flashlight on the dinosaur-patterned comforter covering Jimmy’s bed.

Dad got down on his belly and flipped up the quilt, pushing his face underneath. He could see the outlines of stuffed animals that Jimmy had dropped or put under the bed as part of his imaginary spelunking adventures. Dad grabbed a few fluffy toys with a strong, calloused hand and pushed them out.

As he reached deeper under the bed, he felt splinters and grooves in the wood. “Ouch!” he quipped as he got stuck by a fragment.

“Hey Jimmy,” Daddy said. “Would you hand me the flashlight?”

Jimmy grabbed it and stuck it over the edge. The dimming orange beam cascaded across his father’s green-and-yellow flannel onesie.

“What the hell did this …,” his father murmured as he point the light at the grooves. They were deep and thin. It had to be something sharp like a knife. But Jimmy never took anything like that, and he didn’t have toys that could scrape the floor like it either.

This time, Jimmy’s dad heard it, too. He pointed the light toward the sound and saw a man-sized shadow under the bed. Daddy pulled back from underneath when he saw it.

An orange eye with a red pupil glared at him from the darkness. It narrowed its beady eye and lurched toward him.

Dad flinched, rolling over on his back. His big body jerked and caused the bed frame to jump and land with a thump.

“Daddy!” Jimmy screamed and hung over the side of the bed to see an inky hand and hook-like fingers gripping his father by his face. Daddy stared up at the ceiling, immobile, looking into nothing.

With a yank, the monster pulled the burly man under Jimmy’s bed.

Never to be seen again.

About Monsters Under The Bed

Darkness is a scary thing. It holds the unknown or things anxious kids imagine. That’s why they ask for a nightlight. Even the tiniest beam of light can keep the monsters away.

Because we can see what’s moving or illuminate what we know.

Fear can create tulpas. A tulpa is thoughts that become real. If you can imagine a monster, and you fear it strongly enough, it manifests, much like Jimmy and his monster.

Each monster will be different. What scares one child may not bother the other. In Jimmy’s case, he feared darkness so the monster represented that. Other kids may have a witch in their closets. If you’re allergic to bee stings, then it might manifest as a honey-covered insect with a stingers for fingers.

Eventually, kids get mentally stronger and they gain life experience. As their fear subsides, the monsters crawl back under beds and stay there.