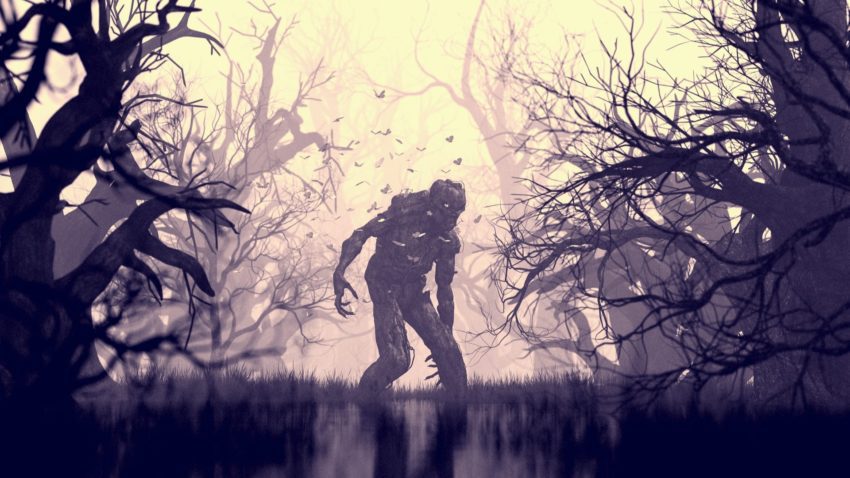 Swamp monsters are elemental beings created by Mother Nature to protect wetlands, swamps and bogs. They activate when they detect people polluting the habitat and hurting its wildlife. Get more after the jump.

Swamp monsters are a defense system created by Mother Nature. These beasts are elementals, or intelligent forces-of-nature, created to protect a natural resource. Intelligent isn’t quite accurate: They’re instinctual monsters with the cunning of a fox, tracking skills of a wolf, and the merciless nature of an alligator.

They just tend to be made of muck, water and plants.

You could think of swamp monsters as the white blood cells of the earth. Swamp monsters form to eliminate a danger to the host, much like a virus. When the swampy area notices someone polluting or damaging the wetlands, the monster forms and stops it.

How it goes about stopping the violation is based on the person’s intent. That gets covered under What If You Encounter… later on.

Swamp monsters are most common in wetland areas, bogs and swamp land. Marshes tend to be too small and water levels vary too much to support a swamp monster.

In North America, you can find them (if you really want to do that) in:

As an elemental being, a swamp monster forms by using nature itself. For this monster, it has shown these abilities:

As for weaknesses, swamp monsters don’t have many. They do reflect the current state of the wetland region. If it’s polluted, it may not be as strong or have total control over animal life. If the wetlands are being drained for development, it may not be able to send a wave or river to drown you. If there’s drought, then it can’t grow as well or regenerate within minutes.

That’s likely why these beasts stick to larger wetland areas. They have the resources to flourish.

What To Do If You Encounter A Swamp Monster

A swamp monster doesn’t want to kill. It simply wants to keep its habitat clean so the fauna and flora can flourish. In other words, if the wind blows your junk food wrapper away and you try to get it, the swamp monster will leave you alone (most of the time).

If you are an industrialist that’s putting in an oil well, then you got another thing coming. The swamp monster sees this as a blight on the earth and will do whatever it takes to shut down the development. You can only escape by leaving the area. The monster will sink the wells and other heavy equipment.

The same goes with illegal dumping in the swamp. If that pollution harms the wildlife, especially beavers, the swamp monster will likely use its vine-like arms to grab you, pull you deep into the swamp, and watch you slowly sink into a muddy mixture.

And delight as you drown or suffocate over a weekend.