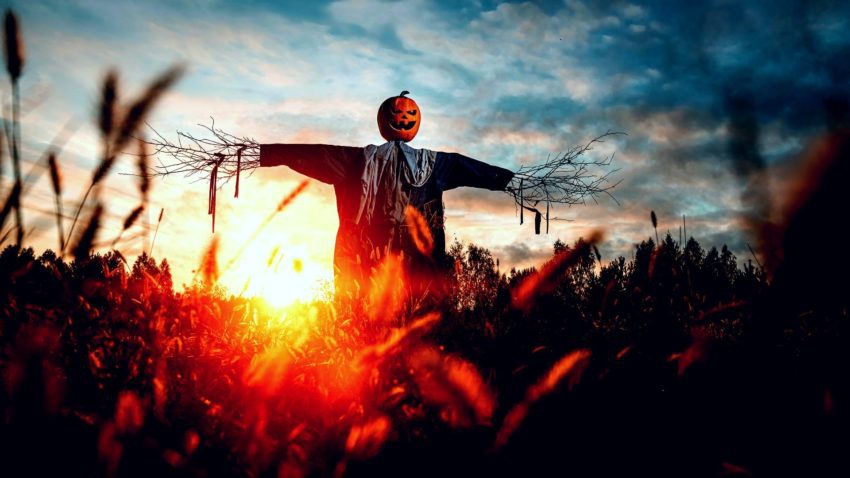 As fall sets in, one spirit becomes stronger and stronger as nights grow longer and colder. Sam Hain, the spirit of Halloween, finally manifests around October 28th and fades for another year on November 2nd.

Sam Hain came to the United States with British and Irish immigrants. It’s more like the legend since it’s associated with Celtic people.

Originally, Sam Hain was known as Samhain (SOW-en), a pagan holiday for the last harvest of the year. It brought the darkest time of year, so the Celts celebrated one last time before winter set in.

As times changed, people and their legends changed, too. The holiday became embodied in the form of a human-like figure. And that figure is the Sam Hain we know today.

As Halloween grew in popularity, Sam Hain began to manifest more often and became a powerful spirit. It’s a spirit we created with our own wishes, hopes and fears.

When Sam manifests, a few things happen in town. First, a dead pumpkin patch or corn field may come back to life. Second, animals may become more active, scurrying around and causing mischief. Third, trees that lost leaves may grow back with fiery red and pumpkin orange leaves to herald its arrival.

Next, you’ll start to see a figure lurking around the edges of town or in fields nearby. That figure won’t be defined. You may see lanky shadows or a pot-bellied kid with a bigger head than normal. You see, Sam can manifest in different ways, but they reflect the Halloween traditions in town. That means it could look like a scarecrow, a walking jack o’ lantern, or something else that symbolizes your town’s version of the Halloween spirit.

This figure will take on its final form the night before Halloween, but you can see it between October 28th through November 2nd. Give or take a day or two.

Sam has many different supernatural powers. Most deal with its ability to appear, disappear, reward people or curse people.

But Sam does have other powers you may be surprised to see. These include:

How To Show The Spirit Of Halloween

If you want to stay on the good side of Sam Hain, you simply need to show a little effort. That means decorating or having a party. Remember, Samhain was a celebration and feast. A little effort goes a long way for Sam.

It loves the following things:

There’s always someone that says bad things about Halloween. Sam takes note of that, but it doesn’t place the curse on all naysayers. It’s selective.

If you object because of your religion, it doesn’t tend to lay a curse on you. But, if you still have some resentment around Halloween, Sam may visit you.

You see, this specific curse isn’t really a curse: It’s a visit by Sam Hain, and it will be angry.

In most cases, it will just scare the spirit of Halloween back into you. Unless you’ve done something horrible on Halloween. Then, it might do something even more drastic.

If you’ve done any of these things, Sam Hain will likely visit you:

What To Do If You Meet Sam Hain

If you live the Halloween spirit, don’t worry. Sam will leave you alone. It may even help you get more treats or make your tricks more sensational. Sam Hain always finds a way to reward folks who revel in the holiday.

This is what you can expect if you love Halloween:

But the naysayers may have something to worry about: Sam doesn’t like it if you badmouth the holiday. It may seek out some nastier-than-normal tricks. In the worst cases, it kills the naysayer (but only if they’ve done something on Halloweens past).

When Sam kills someone, it looks like a Halloween prank gone wrong. A bag of burning dog poop could turn into a land mine. When you step on it, it blows you and your house up. In other cases, people mysteriously choke on candy corn or maybe there’s a razor in your candy bar. It’s different for each person.

As for the tricks, they’re not so evil. Bullies get lost on their way home and cry so hard, they attract the police to take them home. In other cases, the stolen candy disappears. For the meaner people, something may come out of the pumpkin patch or corn fields to haunt them for a night or two.

The torment stops around November 2nd when Sam has to sleep for another year. Still, some scary things may linger through November but they fade away.