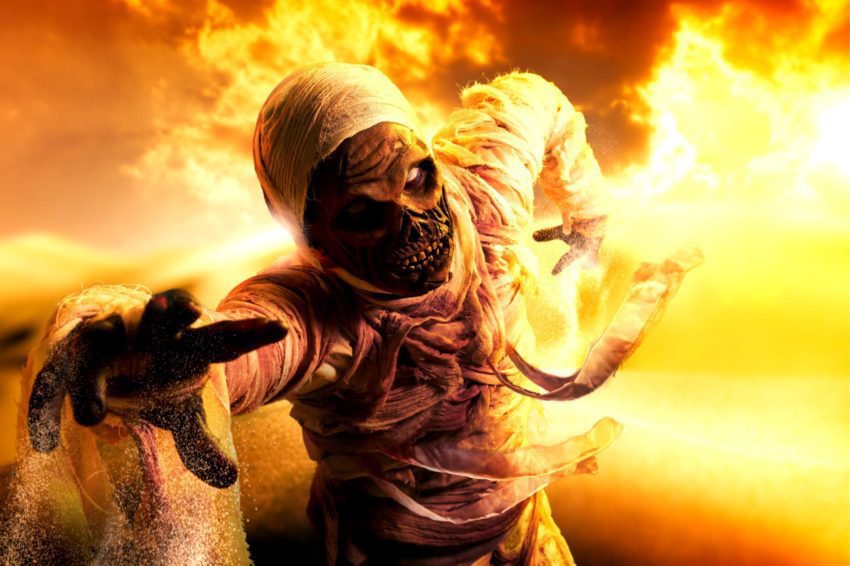 Not every mummy returns to life with powers. Only 2 have god-like abilities, but they come with a catch. Get the scoop after the jump.

Coming back from the dead should be a power on its own, but not for this article. Mummies don’t return because they want to: They get compelled by a disturbance in their burial chambers.

That’s means some human got greedy or stupid, and they touched something they shouldn’t have.

We can only speculate how this disturbance upsets a mummy. There’s one thing for certain: Mummies are pissed when they return to life. You see, mummies want to stay dead.

All mummies have certain powers like immunity to most bullets. They’re dead after all. Soldier mummies have speed and agility. But only two types of mummies have what I’d call super powers, pharaohs and priests.

A pharaoh is the human embodiment of an ancient Egyptian god, Amun-Ra. Most pharaohs exhibit powers related to sun and light, which is Amun-Ra’s dominion.

Let’s explore these powers. Not every pharaoh will have each ability. In a nutshell, they have physical abilities and need a relic or artifact to channel Amun-Ra’s powers.

Pharaohs are strong. Really strong. They can pick up grown men and throw them across a gymnasium with ease. One can toss SUVs, flip armored vans and slow down a tank. My guess is they can lift 10 tons when fully regenerated.

Once fully regenerated, a pharaoh can withstand gunfire and grenades. More powerful explosives can do damage, but pharaoh’s heal at accelerated rates. Don’t expect it to slow them down for long.

These mummies can heal fast by draining the lifeforce from the living. They can also use the sun’s energy to heal. Sucking down someone’s soul does it faster than the sun. If you really hurt a pharaoh, look for the trail of bodies to find it. It will chug down people like a Homer Simpson drinking beer.

Pharaohs are fast. If I had to compare them to animals, they can run as fast as a cheetah, and they can dodge like a cobra. Bullets are too fast for them but, as you just read, those won’t hurt them either.

Not every pharaoh exhibits the ability to grow to monstrous heights. When they do, it ranges between 8′ to 20′. They also retain their super reflexes and speed as giants.

Unlike the other kinds of mummies, fire doesn’t harm a pharaoh. It probably deals with Amun-Ra’s blessing. After all, Amun-Ra is the sun god.

Pharaohs know when danger is present. They may not be able to track you, but they know someone present wants to harm them.

These could be amulets, swords, spears, staff or arrows. In some cases, it could be an animal like an asp or falcon. They help the pharaoh use heat or light as a weapon, like a fiery blast from their hands. If you take it away, they can’t channel the energy. But they still have their other powers, so watch out.

Priest mummies’ powers are more difficult to predict because they derive from sorcery. In Ancient Egypt, religion and magic mixed into a potent combination. It’s unique to the time, rituals and beliefs for that priest and kingdom.

Priests can raise and control the dead. When you see a horde of soldier mummies, a priest probably rose them.

You’ve seen The Mummy movies where Imhotep became a sandstorm and attacked cities. That’s exactly what transformation means. But it doesn’t have to be a sandstorm. Some priests become a swarm of scarabs, pit of vipers or a giant jackal.

It’s common for priests to cast hexes and curses. They also create protective barriers around tombs. Really, this ability lets them do many things.

This could be a magical act but priests can control animals native to Egypt. That means you could get a pack of jackals, a float of crocodiles, or a quiver of cobras chasing you.

Priests also have the same regenerative, strength, speed and agility powers of a pharaoh. They don’t grow to gigantic heights, but who needs that when you can transform into a sandstorm, eh?

Overall, I took the lore straight from the movies, but I did use a few books for this article. They’re listed right below.

Cardin, Matt (2015), “Mummies Around The World: An Encyclopedia of Mummies in History, Religion, and Popular Culture,” ABC-CLIO, LLC.