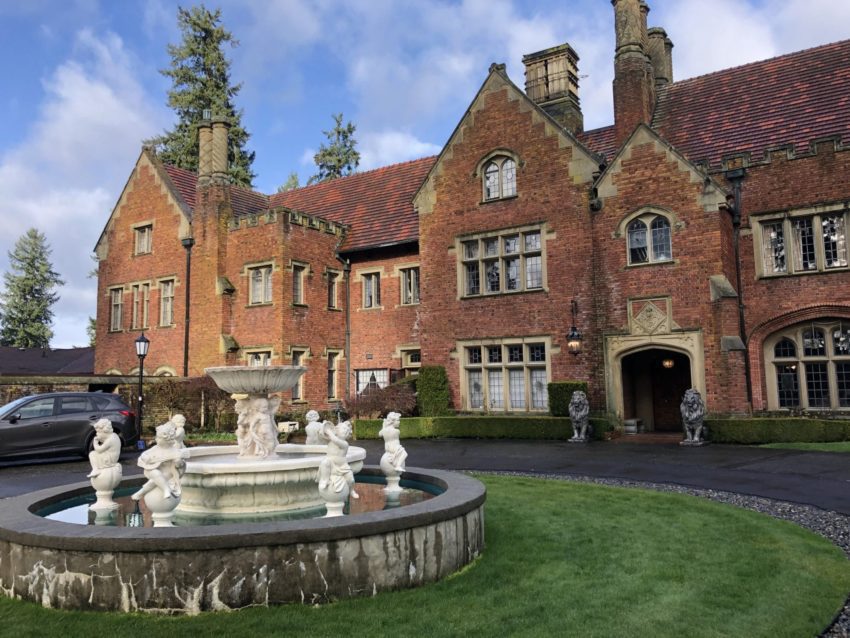 On Saturday, February 22, 2020, AGHOST investigated Thornewood Castle, the site of the Stephen King TV movie, Rose Red. This was a test run for the team. We used new experiments and a more specialized approach to ghostly evidence collection. Get the scoop after the jump.

Thornewood Castle was planned and built over a 5-year period, between 1906 and 1910. The physical building took 2 years to build: Much time was given to making the 100-acre plot as beautiful as possible. The labor force included many local tribesmen and any other able-bodied young man in the area. Allegedly, the tribe placed protective amulets around the property.

Chester Thorne and his wife, Anna, lived here consistently from 1910 through World War II. Their daughter, Anita, also lived in the castle with her husband(s) and son. Chester passed away in the 1927. Anna died in 1954, and Anita sold the property in 1959.

Urban Legend: Chester never molested his daughter and Anna did not shoot him in 1927.

Investigators believe Chester and Anna haunt the property to this day. Most of the activity appears residual in nature and happens during the day.

There’s intelligent haunting at Thornewood Castle, too. It’s believed that Chester loosens or breaks the modern light bulbs in the halls, his former room and office on the second floor. We called it the naval room in our video above. It’s not available to rent at the time of this writing. But it’s open and you can walk into it.

Most other reported intelligent activity deals with your belongings moving. Nothing disappears, but it’s not where you left it. We didn’t have this experience when we stayed there.

This investigation was done on the downlow. Management doesn’t promote the hauntings at Thornewood Castle. We thought it best to investigate as regular tourists checking the entire place out. That wasn’t really the case in the Lakeside Apartment since we’d be alone in there.

AGHOST also used new tests and equipment, which Jake will write about below. We also used a more specialized process. That means each member focused on a single data collection method. We theorized it would let us get the best evidence possible.

In all, we spent 5 hours running experiments at Thornewood Castle, from 7 PM to midnight.

We rented the Lakeside apartment at Thornewood Castle. The property doesn’t offer tours, so you’d have to rent a room to do any sort of investigating. This block of rooms was built in the 1970s and isn’t attached to the castle. You will receive a key that will let you enter the castle at night.

Sandy began the first test, the Estes Method. She would listen to roaming AM frequencies while June asked questions. If an intelligent haunting is present, it would respond to June through Sandy listening to the spirit box.

Sandy did receive interesting information about possible spirits present and the drowned boy.

She also heard something trying to break through the static and radio channels, but couldn’t quite make it out. You can hear more of this session in the video at the beginning of this post.

After debriefing Sandy, June experimented with a white-noise variant of the Estes Method. She would listen to static while Sandy asked questions about the ghosts or property. Ideally, a direct voice phenomena (DVP) would happen and answer Sandy’s questions through the spirit box.

June did begin to hear a distinct voice, but it’s unclear if she had matrixed it.

However, Jake captured 2 EVPs and phantom footsteps during this experiment with his Sony camcorder and Rode NTG mic. You can hear them in the video at the beginning of this report.

Below are the isolated EVPs collected during June’s white noise session. They were altered from the original recording. Jake used GarageBand, with Mid and High set to 3 and the other EQ settings on 0, to better isolate the EVPs.

Our last test involved an Edison lamp. It looks like a lamp from the 1920s, but you can touch it to increase the light. Jake wanted to see if a spirit would try to remove the bulb like Chester’s ghost is rumored to do. Nothing happened during this test.

We left it in the apartment to see if something would turn it on while we were in Thornewood Castle. It remained off when we returned 3 hours later.

We setup cameras, EVP gear and a Boo Buddy to see what kind of residual or intelligent hauntings might manifest. Turns out, we got nothing.

The library is just off the main staircase. It’s a gorgeous room with period lamps, a globe and, of course, a lot of books. We ran an EVP session for about 20 minutes. At this time, we don’t have any evidence from this test.

Earlier in the day and during our walkthrough, June thought she saw Jake pass her. At that time, Jake was on the 3rd floor recording different rooms for later in the evening. He was not on the 2nd floor with her. This is the first of two doppleganger-like experiences.

In Chester’s old bedroom, Jake had hoped to test the lamp, but he thought it would be best to leave in the apartment. It looks like it would belong in Thornewood Castle. You could just imagine management thinking, “Why’s this dude taking our furniture with him?”

Anyway, we ran an EVP session here, and we’re still reviewing the data for ghostly evidence.

In the movie room, Jake felt a pinch on his right calf. It was actually 3 pinches back-to-back. Later in the session, the Boo Buddy picked up something touching it. Our cameras didn’t detect an apparition. Jake saw a shadow move down the hallway, but it may have been another guest. There were 2 couples on this floor.

Audio review continues at the time of this writing.

In the game room, we continued with EVP sessions and recording in full spectrum video. We tried a new test: One where we’d write questions, remain silent, and see if any intelligent haunting would answer them as EVP. We’re still reviewing the audio at this time.

Later in the night, Jake saw a person walk down the hallway in what looked like the same shirt as Sandy. When he went into the hall, he didn’t see anyone. This was similar to June’s experience near the library earlier in the day.

For our final test, June wrote a phrase in our journal, then she went into the Rose Red room and read it multiple times. Sandy and Jake remained down the hall so they couldn’t hear it. Next, we entered the room to test if the possible spirit would read it back to us as an EVP. This would prove some kind of intelligent haunting manifested.

At this time, we’re still reviewing our audio. The camera mics did not pick up any ghostly voices here.

Yes, we think Thornewood Castle is haunted. We wouldn’t have the intelligent EVPs, dopplegangers, phantom footsteps and pinches if it weren’t. However, it wasn’t the usual hotspots that popped for us: It was the Lakeside Apartment that had most activity. Most investigators don’t focus on the 2 apartments on the side of the castle.

Maybe that’s why we got the evidence? Someone actually asked them to communicate.

We’ll go back try different rooms. Not sure when that will be just yet.

Also, if you want to stay at the castle, use Thornewood Castle’s website to book a room. It will save you 15%.

If you’d like to join AGHOST to investigate the most haunted places in Seattle, Puget Sound, the USA and world, visit the Become A Member page today.

One thought on “Ghost Hunt | Thornewood Castle in Lakewood, Washington”