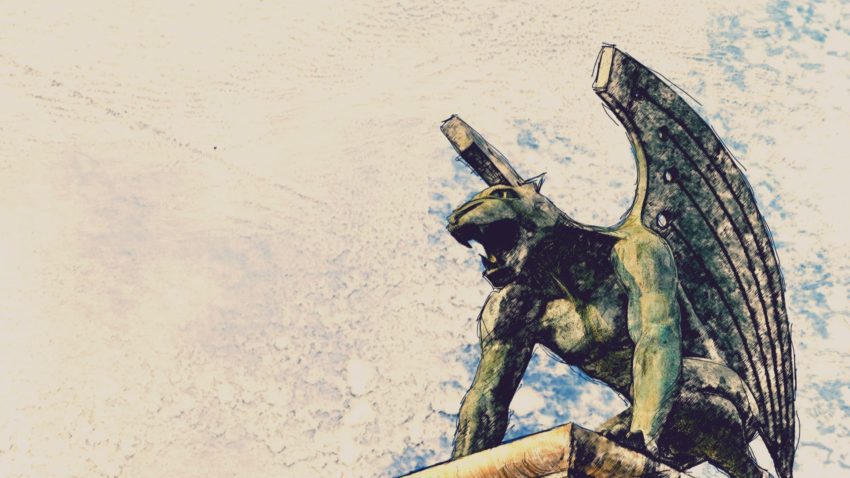 Gargoyles are created when someone agrees to become a monster to protect a person, place or thing. They may seem like unthinking beasts, but they still have the soul of a person inside. Get more after the jump.

Gargoyles are not a monster found in the wild: They’re made, and made by black magick.

A spellcaster will find a willing victim. That’s right. To become a gargoyle, someone has to agree to the transformation. Someone will not transform if they say no when the offer comes during a sorcerous ritual. That person usually dies once they decline.

The soon-to-be gargoyle is usually a follower of a spellcaster, a member of a cult or rite. They have absolute faith in the magick user and the powers they’ll soon possess.

To be clear, not every gargoyle has to be in a religious cult. It could be anyone that understands the duties they’ll soon take on. Gargoyles are protectors of a person, place or thing.

The Use Of Ritual Magick

It takes the darkest magick to turn someone into a gargoyle. They give up their human form to become a monster.

The ritual itself is rather simple. While the spell won’t be written here, the steps include:

Over the next 24 hours, the victim’s body goes through a transformation that sees them decay, rebuild their bodies based on the elements from Step 4, and rise in their gargoyle form as darkness falls.

Bound To A Person Or Location

Gargoyles have a leash. They’re bound to the location they were created or to a single person. In some cases, it’s a thing like a painting or other artful object. Those are rare cases.

For a place, it will be the historic size of a property. For example, let’s use a church. In the 1800s, it may have owned 10 acres, but it got carved away as the years went by. When the gargoyle forms, it will roam the full 10 acres. It doesn’t matter if the church still owns it or not.

For a person, it usually stays within their home or within a quarter-mile of the person. Now, the person who commands the gargoyle will need to wear something to link them together. It could be a ring, necklace, bracelet or other piece of jewelry.

As a supernatural monster, gargoyles will have many different abilities. But they only have one weakness. It’s a doozy, too.

Gargoyles have many physical powers that are linked to the elements used during the ritual. There are some abilities that all gargoyles have. Those include:

After that, it will take on the abilities of the elements used in its creation. If the spellcaster used a feather, the gargoyle will have wings. If a matchbook was used, it can breathe fire. If a snakes skin was used, it has a poisonous touch or venomous bite. You get the point. There’s a lot of variety and appearances with gargoyles. It’s hard to predict what you’ll get.

Gargoyles may seem powerful, but they have a debilitating weakness: They become stone during the day. They’re like attack dogs that only roam the grounds or a person’s home at night.

For a personally-bound gargoyle, it will turn to stone if the shared object is removed or destroyed.

Gargoyles also turn to stone if they leave the area they protect. It may be night, but they have a range. Step outside and turn to stone. Once the gargoyle becomes stone, it can be shattered, which will slow it down.

A shattered gargoyle isn’t dead. It died once it transformed the first time. You can put the parts back together and recite the spell to re-form the gargoyle. This ‘rebuilt’ gargoyle will be a touch weaker.

Nothing is ever the same after it’s broken.

What To Do If You Encounter A Gargoyle

Like most monster encounters, get the hell out of there ASAP. You’d be surprised at how effective running away can be.

Not everyone has that option. Usually, gargoyles aren’t out to kill anyone unless they threaten to harm the land, building or person that binds the gargoyle.

It may grab you, knock you out or break a limb (it happens), but killing is a stretch for gargoyles. Remember, there’s the essence of a human in that monstrous body. You might be able to talk your way out of it.

Think of it as negotiating with a grizzly bear. Back away slowly. Avoid eye contact. Close the gate behind you.

One thought on “Gargoyles | Spellbound Protectors”