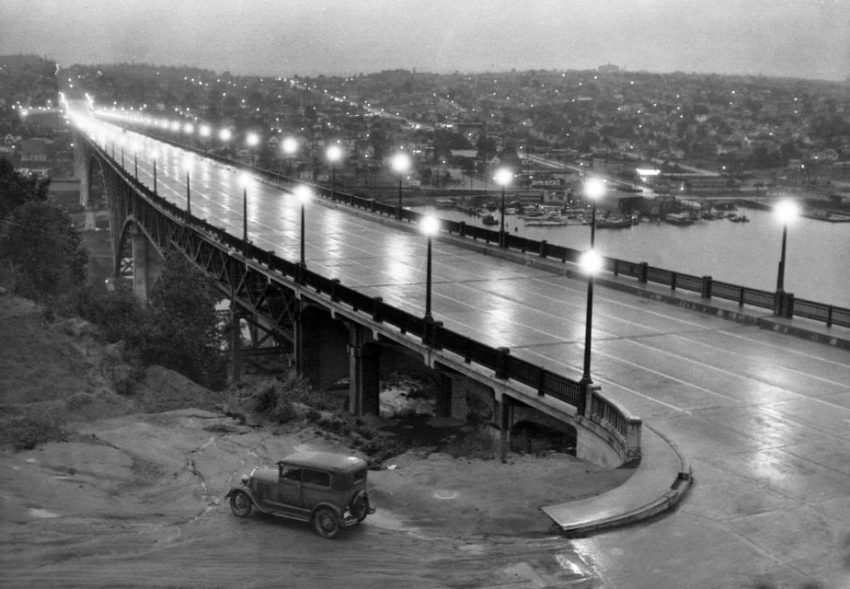 Aurora Bridge, also known as George Washington Memorial Bridge, connects Queen Anne and Fremont on the north side of Seattle. Today, it’s one of Seattle’s most haunted places.

It’s should come as no surprise that many of the ghosts are linked to suicides. In January 1932, the bridge opened and the first person jumped to his death. Over the next 85 years, more than 230 people have ended their lives this way. Only the Golden Gate Bridge has had more suicides.

Seattle and the Washington State Department of Transportation (WSDOT) tried to put up barricades or a fence to stop jumpers since the 1930s. In 2007, an initiative passed and funds were set aside. Construction began in March 2010 and completed in February 2011, shortly after another suicide. WSDOT also added 6 emergency phones and 18 placards with a suicide help line number on them.

The fence has worked and the suicide rate has dropped. Actually, people have moved to a new place, the Pike Street overpass above I-5. In the past 3 years, at least 5 people have committed suicide from this bridge.

Aurora Bridge has also seen two horrific traffic incidents in the past 20 years.

In 1998, a Route 359 bus passenger, Silas Cool, shot and killed the driver, Mark McLaughlin. Cool then turned the gun on himself. The out-of-control bus went over the east side of the bridge and crashed into an apartment building below. The impact killed another passenger and injured more than 30 people on the bus.

In 2015, an amphibious vehicle, called a duck, collided with a charter bus in the middle of the bridge, killing 5 and injuring 50. According to witnesses at the scene, it appeared the duck crossed the median and caused the accident.

There aren’t many ghosts haunting the bridge. Two sets of ghosts seem to manifest, a man with a dog and a couple. Surprising, right? You’d think there would be more based on the hundreds of suicides that happened here.

The man with dog seems to walk along the bridge between 2 AM – 4 AM. Witnesses then report the man grabs the dog and jumps off. The same witnesses said they could see the man with his dog watching them from a beach below the bridge. Unfortunately, no one has described the ghost and dog. If we knew the era from his clothing and dog breed, we could research suicides from that time and identify him.

The second haunting involves a man and woman walking along the pedestrian way. They stare at the living as they make their way across the bridge. When the living look back, the couple is gone. Again, no one has described the couple, nor do they seem to jump off the bridge like the other ghost.

In a third case, people have said a little girl hangs herself as she tumbles off the bridge. This one reeks of an urban legend. Ghostly Activities found no mentions of a hanging girl in the Seattle Times archives, nor the Seattle Post-Intelligencer archives.

First, be discreet. This is a sensitive subject to most of the people in the area. Many people, who live in Fremont, Queen Anne and Lake Union, knew many of the jumpers or they saw someone jump from the bridge. Don’t be obvious about your ghost hunting.

Second, there’s not much, if any, EVP captured. The bridge is a busy roadway most of the day and night. Your recordings will have a lot of noise on it. We say skip the audio equipment for this investigation.

Third, go hunting with a digital camera, IR camera or full spectrum camera. Most of the witnesses reported apparitions, so you may get lucky and capture Class 3 or Class 4 apparition.

Fourth, do your ghost hunt during the day. This may seem counter to what you read about the man with dog ghost, but most of the suicides happened during the day. The ghosts may manifest at their time of death. This means you may want that full spectrum camera handy because it should work the best under daylight conditions. Your IR cameras will likely get whitewashed by the sun. Digital cameras may not focus on the ghostly orbs and mists during the day, either.

If you capture any evidence, let us know about it. We’d love to put it on the blog.

Gardner, J (2011). The Girl on the Bridge. SeattleMet.com. Retrieved from https://www.seattlemet.com/articles/2011/6/29/seattle-aurora-bridge-suicide-prevention-july-2011