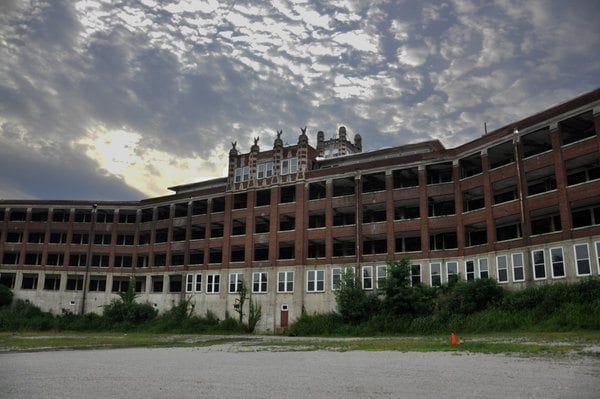 Waverly Hills Sanatorium opened as a tuberculosis hospital in 1910. It was intended to hold 40-50 people, but Louisville built more buildings when it was hit by a TB outbreak. Eventually, the city could no longer fund the hospital and the horror began.

Between 1914 and 1926, the hospital grew quickly. New wings were added to the main hospital, mainly to hold the influx of sick patients. A children’s pavilion capped off the new campus. It would hold 50 children’s bed and it had a maximum capacity of 130 patients.

In 1924, a sanatorium was added to hold up to 400 patients. However, the city stuffed the campus with far more people than it could hold. The city didn’t turn away anyone who was ill.

The Decline of Waverly Hills

By 1943, streptomycin, a powerful TB drug, had greatly reduced the number of TB cases. In 1962, the hospital was no longer needed and it became a seniors home called Woodhaven Geriatric Center. Specifically, it was a home for seniors with dementia and those who could no longer walk. It remained open until 1982, when the state closed it due to confirmed reports of patient neglect from under staffing and overcrowding.

Yes, it’s true patients died at the hospital, but it was due to tuberculosis or old age. At the peak of the TB crisis, 162 people died there. It was mainly soldiers returning from WWII, who contracted TB overseas. About 5,000 people died at Waverly between 1910 and 1961. If you take into account its time as a senior living facility (1960s – 1980s), then the number may reach 8,000 for a historic total.

2. It wasn’t deplorable at Waverly.

Sure, there were instances of overcrowding, under staffing and low funding, but the staffers did a good job of caring for the sick and elderly over the hospital’s life. It was in the late 70s and early 80s that things got bad and the state corrected it as soon as it became public. Still, it was crappy in its final 4 or 5 years.

Let’s talk about ghosts. Yes, the sanatorium is haunted. Most of the activity is on the 5th floor, specifically Room 502. Two nurses committed suicide in this room. The first nurse hanged herself when she found out she was pregnant and unmarried. Now, this isn’t confirmed – there’s no death record for her. Rumor has it, she had an affair with the married administrator and he wasn’t going to leave his wife. I’m somewhat surprised she didn’t become a ‘woman in white’ haunting. Maybe she did?

The second nurse jumped to her death in the 1950s. Again, this isn’t confirmed. No records exist, but it is compelling.

The ‘body chute’ is the area of most interest to ghost hunters. This is a little sick to think about, but I can understand why Waverly Hills’ management decided to do it: At the peak of the TB crisis, the hospital had a tunnel to take the bodies out to a train. The train would collect the bodies and move them for burial. With so many people dying from the disease, management didn’t want to demoralize the patients, so they made this system to keep the patients from seeing all the death in the hospital. If you take the tour, you can go through the tunnel and conduct a little EVP. You can find it on the first floor of the hospital for advanced cases.

Waverly Hills Sanatorium is open for business. Ghost hunting business that is. New owners are converting it to a hotel for ghost hunting! As of this writing, you can book a tour and ghost hunt. It’s by reservation, so book now. They begin in March 2014. Here’s the website for you: http://www.therealwaverlyhills.com