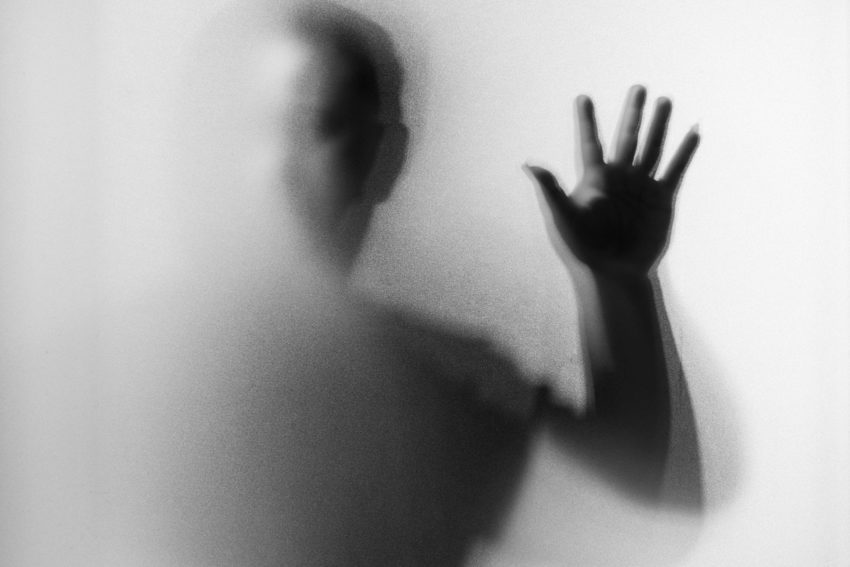 A new father battles a specter in his dreams and home near Pasadena, California in early 2015. The final confrontation happens in his newborn’s bedroom. Will he be able to protect his family?

In early January 2015, Jordan*, a cartoonist and expectant father, had a restless night. He stayed  up late, streaming anime on his computer until he could sleep. Stress, worry and the anxiety of fatherhood wore on him.

He heard buzzing–the kind you hear near power lines. The lights dimmed–maybe it’s a brownout. His computer stopped streaming, static overtook the screen, and then it went black. The shadow of a man appeared behind him, reflected by the now black monitor.

It was tall–standing nearly seven feet–with twig-like arms that hung lower than its knees. Its fingers flicked like a spider when it rolls a fly in its web. The charcoal-gray figure wore what looked like a top hat. It manifested for a few seconds. That was enough time to jolt Jordan awake and check his mid-century rambler for intruders.

He found nothing in or around the house. All doors and windows were locked.

At 3 AM, Jordan went to bed and slid under the covers next to his wife, Jasmine*. He tossed and turned for what seemed like an hour. Finally, Jasmine told him to settle down or take a sleeping pill.

He took the pill, but it may have been a mistake. Jordan met the entity again in his dreams.

“When I take a sleeping pill, I don’t remember my dreams. Tonight, I remembered every detail. This thing waited for me. Darkness surrounded me and the air smelled like fresh dirt. I was in a pit of some kind. I could look up and see the clear night sky. Then, I went numb from cold,” Jordan said.

“The ghost or spirit appeared next to me. It swung its gangly fingers at me, but I turned. It slashed my back and knocked me down. It jumped on top of me and raised its knobby, crooked index finger.”

“I woke up right as it stabbed me in the chest with it.”

Jasmine saw Jordan’s struggle in his dreams. She said, “He fought something. I thought he had a nightmare. He swung at something and nearly fell out of bed when he lurched. It’s like he tried to avoid getting hit by a baseball.”

“At the worst part of his nightmare, it sounded like he couldn’t breathe. I was about to call 911 when he woke up.”

Jordan didn’t know what to say. He told Jasmine it was a night terror and he had them as a kid. He said it must be stress and anxiety triggering them. After all, Jasmine would have the baby in a month and his life would change.

Over the next month, Jordan had many dream fights with Mr. Scary. The entity became more defined with each attack, and each attack caused more physical injuries.

“After the third attack in three weeks, I started to get scratches and bruises on my arms, back and chest,” Jordan said. “I stopped sleeping. I think I functioned like zombie right up my son’s birth, just going through the motions.”

Two days before his son’s birth, Mr. Scary attacked Jordan and left three deep scratches down his back–from his left shoulder blade to his waist. On his chest, it looked like got beamed by a baseball over his heart. It hurt so bad, Jordan thought he had a heart attack.

The Fight Is On

“It was three weeks after we brought Drew* home. Mr. Scary came back with a vengeance,” Jordan told Ghostly Activities.

Jordan and his son both liked to stay up all night and sleep during the day. It was well after midnight when Mr. Scary manifested.

“It happened just like its first appearance,” said Jordan. “The lights flickered, my computer froze and the monitor went black.”

Jordan turned around–with his son in his arms–to see Mr. Scary in its fully manifested form. It looked like an old white man in a black undertaker’s suit, with facial skin pulled so tight, you could see its cheek bones jutting out. Its body was wasted: Its suit draped across its bony body.

Mr. Scary reached toward Jordan and Drew, exposing a hand covered in liver-colored age spots. Its skin so thin, you could see its tendons twisting as it flicked its index finger at the baby. Its finger nails were urine yellow with graveyard dirt caked in its cuticles.

Jordan ran to the baby’s room, just down the hall from his computer, and slammed the door shut.  Mr. Scary’s shadow, created from the living room lights, seemed to stretch under the door’s frame across the room.

Jordan locked the door as the handle began to jiggle. Scary wanted in and it wanted both of them.  It slammed into the door, trying to enter, but it couldn’t break through. There was some kind of protective barrier around the room.

Then, the spirit howled like a kicked dog. Jasmine was awake and attacking Scary.

“I had a burning sage and asafetida stick, and I threw Oil of Abramelin at the monster,” said Jasmine.

To her, Mr. Scary appeared as a smoke-like shadow moving across the baby’s room door. She could see the door shake and she heard faint screams coming from it. Scary would swing a smokey fist at her, but Jasmine would put up her forearm as a shield, protected by a mystical bracelet. It deflected the attack back on Scary and hurt it more.

Inside the room, Jordan heard what sounded like death cries from a banshee.

The battle lasted less than 5 minutes, according to Jasmine. Scary dissipated with a whimper.

Jordan researched demons, shadow people and specters between the third attack and Drew’s birth. He discovered Ghostly Activities’ posts about herbs that protect against evil spirits, paranormal protection with iron and silver, and how to protect yourself against energy draining.

He made notes about those techniques and Jasmine spoke to a friend who studied the supernatural. Cassie* gave the couple instructions to protect their home and baby.

Drew’s room was protected with cumin and salt under the door frame and on his window sill. The couple also had a boxwood-blackberry wreath on his door. Scary wouldn’t be able to enter his room with these protective tactics.

The sage and asafetida stick combined two powerful herbs that can drive away evil spirits. That, and the Oil of Abramelin, weakened Scary so much, it had to leave this plane of existence.

The family continues to use paranormal protection tactics to keep their home safe. Mr. Scary has not returned.