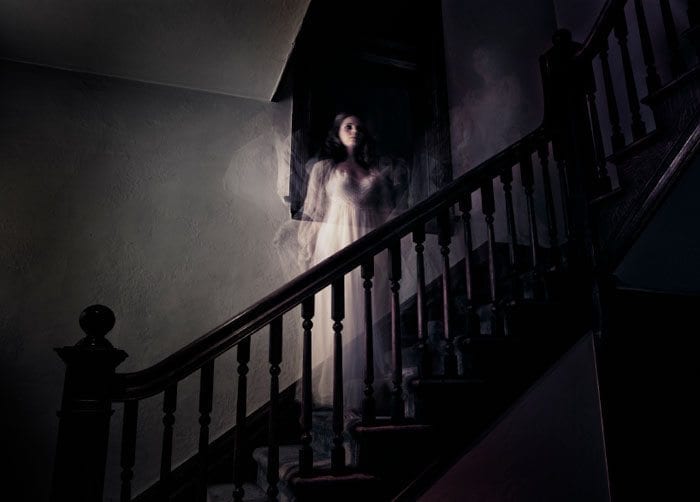 Ghosts have actively haunted Krista’s home since she bought it more than 20 years ago. At first, they seemed harmless, but they annoyed her family from time-to-time. Then, they tormented Krista on a Christmas Eve night a few years ago.

Note: Krista is not our client’s real name. We’ve changed it and we’ve used a general Bucks County location to protect her identity.  Pictures used in this article help create the mood of the story and they don’t reflect the owner’s home. Again, this is to protect her privacy.

“I remember the hauntings started shortly after we moved in,” Krista says. “I was pregnant with my first child and we were so excited to have this big house for our family.”

Her husband bought a fixer-upper, colonial-style house in the northeastern part of Bucks County in Pennsylvania. It had a finished basement and attic, and 4 bedrooms.  They didn’t know much about the property. It had been empty for a few years while the former owner’s estate went into a legal battle.

Krista and her husband knew the house was built in the 1830s and that it was a clinic during the Civil War. This part of Bucks County saw many battles during that period and many soldiers died nearby.

“The hauntings started once we started remodeling the kitchen,” Krista said. “There were little things that happened like our keys would go missing or a door would slam shut. As we did more work, the ghosts became more active.”

Luckily, the ghosts never ventured into the bedrooms and they left the family dog alone.

“The ghosts seemed to respect our bedrooms. They were always a safe place,” Krista stated. “I heard animals act strange when a spirit is nearby, but our dog never seemed nervous. He didn’t bark at things that weren’t there and his health was always good. Although, his toys did end up in the strangest parts of the house like in a bathroom sink.”

As her children aged, the ghosts seemed to get stronger.

“The spirits became more physically active as the kids grew into teenagers. No one was ever hurt by them, but the faucets started to turn on and off, and so did our electrical items like TVs and lamps. Sometimes, the lights would flicker so fast, I thought we had a strobe light on.”

The most concerning ghostly encounter happened during the holiday break a few years ago.

“It was Christmas Eve and it was our first Christmas after I filed for divorce,” said Krista. “There was a lot of negativity in the house. The kids were very unhappy. I mean, I was, too. A sadness really permeated the house and I think the ghosts picked it up. They became very active that night.”

The activity increased throughout the night. At first, the ghosts knocked on the walls and moved furniture in the attic. The normally calm dog became visibly nervous: He was panting and pacing in circles in the living room. He began to bark at the stairs leading to the second floor bedrooms.

Then, the ghosts started doing things they hadn’t before: They moved things in the bedrooms.

Krista recalls the night well. “I remember wrapping the last gifts and placing them on my bed. There was a rumbling sound coming down the hall and the doors all slammed shut. I opened my bedroom door and called out to the kids. They said they were fine. I heard some bangs in my room and, when I turned around, the gifts were now on the floor and crushed.”

That’s when a spirit began manifesting in her bedroom. The lights flickered and dimmed. They didn’t turn off fully, the coils in the bulbs glowed a faint orange. It became freezing in Krista’s bedroom.

“I had enough and I yelled at it to get the f— out of my room and leave the house, or I’d have them all exorcised.”

Then, the temperature returned to normal and her wardrobe door opened slightly.

“I turned to it with every intention to close and lock it, but I didn’t get the chance.”

She heard a loud creak and then the wardrobe’s doors flung wide open. Her clothes flew out like someone grabbed the hangers-one by one-and tossed them on the floor. At that point, her bedroom windows opened and gusts of wind twirled her clothes as if a twister were in her room.

“It was a mess; I was a mess,” she says. “I started crying and pleading with them to stop. I took back the exorcism warning and asked them to forgive me.”

Once she did that, the winds died down and the wardrobe became motionless. It was very, very quiet.

“My sons came in the room and saw my clothes and broken packages. They knew what happened to me, but they weren’t targets of the ghosts. The dog was fine, too. It was just me.”

A few days later, a power surge destroyed most of the wiring in the old house. The ghosts seemed to vanish as soon as it happened.

“I think we went a year without any activity from the ghosts. Once my older son went away to college, the ghosts started again. I could hear footsteps in the hall and attic.”

“I’ve read up on ghost hunting and clearing spirits from homes. I bought some herbs and learned some rituals to protect myself and my younger son. I think the ghosts understand I now have the power to remove them, if I wanted to do it.”