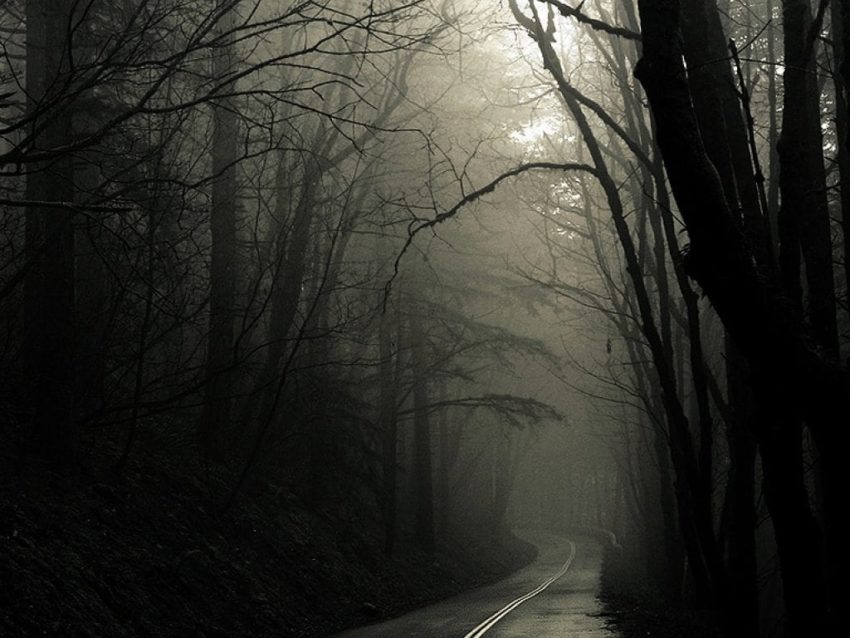 George* never believed in ghosts or anything considered paranormal. Then, he experienced the unexplained.

“I was driving home from Madison (Wisconsin) with my dog, Stacie*. I live about 90 minutes north of the city and my town, Necedah, isn’t near Interstate 94. I took a short cut along Highway 12 to get to Juneau County and then I’d change to 58 in Mauston.”

Officially, it’s Highway 12 & 16. The road winds through Dane, Sauk and Juneau counties in south central Wisconsin. The route is notorious for dense fogs that settle in the valleys and hug the forested hilltops. It also takes sharp turns due to the terrain. There are many steep hills and sheer bluffs. The stretch of road, especially in northern Sauk County and southern Juneau County, has caused many travelers to drive off the road or crash into another car.

“That night the fog was really dense. It was sunset and the fog was already settling in. I could only see 5-10 feet in front of me. I had to crawl up the hills and around the bends in the road. I thought I was going to hit someone or a deer. I had to get home. Stacie* needed to take her medication.”

George visited Madison because his six-year-old hound mix had cancer surgery at the University of Wisconsin veterinary hospital.

“I’m glad she was still groggy because what came next frightened the hell out of me.”

As he approached a notoriously dangerous bend, he saw red flashing tail lights. They looked blurry in the fog, like someone smeared a watercolor painting of the scene.

“As I pulled up, I could see something was really wrong. I stopped the car, put on the emergency flashers and walked over to it.”

The car was upside down in a deep ditch. The driver had gone through a guard rail and flipped the car over. No one was present at the scene.

“I reached for my cell phone to call 911, but there was no signal. I mean, this is rural Wisconsin and your signal can drop in this part of the Driftless Area (the name of this section of the state). I decided to go another 5 miles to Lyndon Station and make the call from town.”

As he turned from the wreck, he saw a figure standing next to his car.

“She somehow developed out of the fog. It seemed like the fog bubbled a bit like boiling water and her silhouette formed. Then, her hair and clothes came into focus. I thought she was the wrecked car’s driver, but her clothes looked like they were from the 1940s or 1950s. I couldn’t make out her face. Her eyes and mouth weren’t visible. They were just dark gray areas. She was all gray.”

“It stepped near me and I couldn’t hear her walking. It was quiet and I didn’t hear her step on the gravel on the side of the road. I couldn’t see her legs move. She came within a yard of me. It seemed like she was checking me out. I got a very cold chill running down my neck and back.”

The figure then turned away from George and pointed to the south, toward Lyndon Station.

“I got back into my car and checked on Stacie. She was still sleeping. Normally, she has a barking ruckus when a stranger comes near me.”

“As I pulled away, I decided to drive faster than I would normally. I wanted to get to Lyndon Station and contact the police. Not the sanest thing to do under the conditions, but I was freaking out.”

When George got to another dangerous turn, about 1 mile from the accident site, she appeared again.

“I knew there was a hard left turn somewhere and I started to slow down. I thought I could see a guard rail. As I got a bit closer, she formed by it and pointed to the west. I turned hard. I was about to drive off the road. If I didn’t get the warning, I would have gone off the road and into a gully.”

The figure appeared one more time near Lyndon Station. She stood by the side of the road. The fog had nearly broken now. She faded away into the fog as he drove by.

“When I got to town, I stopped at a local diner to contact the police. I asked an elderly gentleman next to me about Highway 12. I didn’t say anything about the ghost or spirit or whatever it was.”

“He said the road was really dangerous, especially on foggy nights like tonight. In the 1940s, the county put up guard rails because a politician’s daughter died when she drove off the road. Since then, the rails have saved a lot of lives. He also told me I’m not the only one to ask about Highway 12. Travelers tend to stop at the diner – on foggy nights – and ask about its background. Maybe the spirit protects more drivers than the guard rails do?”

Note: This story has been corrected to reference his hometown and full route. Originally, Friendship was used as the hometown. That was his destination the day after this story took place. Also, more details were added to his route home, which includes an exit in Mauston, WI and a change to WI-58 from Hwy 12. Sorry about that folks.