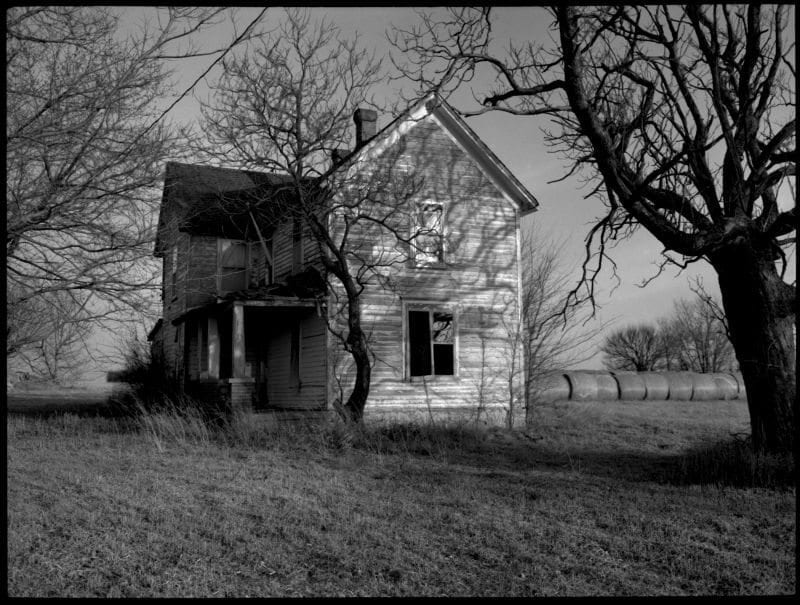 This is a tale from my third or fourth ghost hunt in 2007. I received a request to investigate a haunting at an old farm house in Grant County, Wisconsin. The family wanted to sell their property and move away. What came next scared the hell out of me.

Family friends had asked me to check out their farmhouse. The owners, a couple in their late 70s, wanted to sell the land and move to Madison. They hesitated to sell it at first. It had been in their family since Wisconsin became a state in 1848.

It also had the family graveyard on the property.

Mrs. Halvorson* felt such a strong connection to the property, she really didn’t want to leave. It was her family that first settled in the area, but her health had started to fail. She needed to be closer to modern health facilities in Madison, about an hour away.

She explained that her grandparents and uncles were buried in the family plot just below a low hill where the house sat. She also thought her grandmother haunted their home. That’s what she wanted to know. Was it really her grandmother, or was it her mind playing tricks on her?

Her husband went along with the investigation. It made him very uncomfortable. He was a very devout man and the talk of ghosts upset him. Mr. Halvorson* became tense when I spoke to him about the possibility of a spirit in the house.

We set a date a few weeks out when I could run the investigation. It would be Saturday, October 13th – a sliver moon night.

To be honest, I investigated in mid-afternoon to early evening, so the moon phase wasn’t really important. The temperature had dropped into the upper 40s when I began. At this temperature, my digital temperature recorder wouldn’t notice cold spots and my breath could create a false ectomist. I decided to rely on EVP and video evidence. I had an infrared digital camera with me.

The family had gone away for the weekend, so I had freedom to walk around the property and take recordings. Unfortunately, I couldn’t investigate inside the house. Mrs. Halvorson made it clear I could stay on the porch, but not enter. Also, she and Mr. Halvorson didn’t want me to take pictures. They were very firm about that request.

The property was near the end of a long dirt road. It was miles from any town of note. In this area of Wisconsin, the addresses were rural route fire department codes, not street addresses.

A forest surrounded the property, a mix of maple, oak and pine trees. The leaves had nearly all changed to the bright yellows, reds and oranges of fall. It created a crunchy blanket on the forest’s floor. It was complemented the gray rocks of the hilly countryside. Bluffs jutted high above the valley floors – all sharply carved by the rivers, streams and creeks that flow into the Mississippi River. This is the Driftless Area in southwestern Wisconsin.

The house sat at the bottom of a valley and close to a bluff. It was perched on a small knoll above a stream and it had seen better days. Its light blue paint had chipped away and exposed the wood underneath. Behind it–and by a stream’s bank–was the family graveyard.

It was obvious the stream flooded the area a few times. Dead trees and drift wood were scattered along its bank. There were a few pieces of drift wood by the cemetery’s fence. I bet some of the bodies had washed away in floods.

I began my investigation by logging the conditions like the temperature, humidity and moon phase. Next, I laid out my equipment on a blanket. There was no wind and not much background noise. It was still.

My investigation of a half-collapsed barn found nothing special other than a family of raccoons. I sat on the porch for a half hour to record EVP and try to glimpse inside the house. Nothing.

Then, I went by the family graveyard.

The fence around the graves had rusted badly. It seemed it would crumble if touched. At this point, it was dusk and the sun was setting behind a bluff, creating an orange sherbet colored sky. I was fumbling with a flashlight in my bag when I heard a rustling behind some of the moss and lichen covered grave stones.

Raccoons was my first thought, but I didn’t see any animals in the area. As I walked closer to the graves, a chill ran down my spine. Something was present.

I pointed my infrared camera at the graves and the batteries began to die. But, I caught a shadow. At least it started as a shadow. Slowly, it started to take form. Standing behind a grave stone was a woman. I should say the upper-half of a woman. Her hair was in a bun and she wore a gown that was at least a hundred years old. It looked like it had billowing sleeves and a white doily collar.

When I lowered my camera to see with my own eyes, there was nothing, just the woods behind the cemetery. As I raised my camera again to see the infrared range, she was still there. I clicked and took a picture. She looked at me, but she seemed peaceful. A head appeared at her waist level, the bottom of her apparition. It looked like a little boy. They soon faded away and the batteries in my camera gained their charge again.

The encounter left me stunned. I had no idea what to do with this evidence. Do I put in on MySpace, Friendster or Flickr? Luckily, my senses came back to me. I was a ghost hunter and the first people to see the evidence would be the Halvorsons.

The next day, I drove back to their house from my hotel in Platteville to show them the evidence.

I didn’t have much to show them, just the black-and-white picture of the female apparition. She looked at it and nodded. Then, she asked me to delete it.

Mrs. Halvorson explained that it was likely her grandmother and one of her uncles. Her grandmother had lost a child in a farm accident. The boy was about 6- or 7-years-old when he died. He was buried in the cemetery.

They thanked me for coming out and said they would have their pastor come to the house and clear it of spirits. In the end, they wanted to sell the property, but they couldn’t sell a haunted house to a new family.

I hear they passed away a few years later. As far as I know, there are no ghosts at the Halvorson House anymore.

*Names changed to protect the family’s identity. Images picked off web that reflect the setting. If I used actual pics, then the house would be identified. I can’t break the confidentiality agreement with the family.