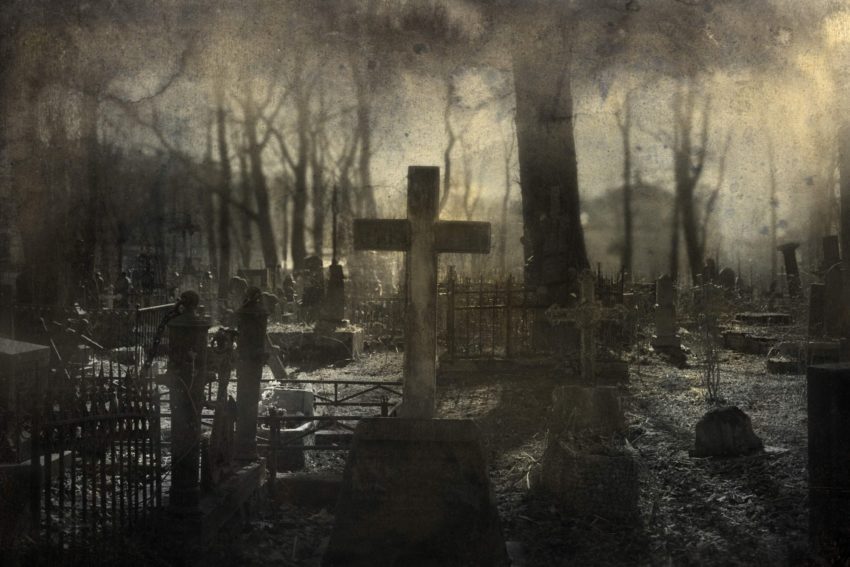 It’s not every day your ghost hunt becomes the ghost story. But, that’s exactly what happened to Ghostly Activities’ co-founder, Saleen Graham, when she went to get preliminary readings for an upcoming investigation.

Saleen and her sister, Jackie, had time to kill over the Christmas break. They decided to go to Aux Sable Cemetery in Minooka, Illinois to take some readings. Then, follow it up with an investigation a few days later. The date was December 26th, 2013.

“It started out simply enough,” said Saleen. “We would go to the cemetery with a minimal amount of equipment and collect some EMF base readings and pictures. I decided not to take a video recorder because all recorded activity happens at night.”

They arrived around noon and parked their car on the side of Brown Road.

“Aux Sable Cemetery has two known ghostly activities. First, there’s a little girl spirit, who can pull pranks on you. She seems attracted to cars parked in the cemetery at night. The second type is a ghost portal. I can see why a ghost portal may form here. The cemetery borders Collins Run, a stream, and Aux Sable Creek. Flowing water, near a place of death, can help a ghost portal form.”

Saleen and Jackie, who are both psi-sensitive, started their investigation with a little prayer, and they mentally reached out to whatever spirits were nearby.

“We like to let the spirits know we mean no harm. We just want to know if they have any messages for us to deliver,” Saleen said.

As the ladies got ready to collect readings, the first ghostly activity happened.

“I had just turned off the car when the windows lowered. The keys were in my hand, so I know there was no power to lower them,” Saleen said.

After raising them, the women took their cameras and an EMF meter out of the trunk. As Jackie shut it, the windows lowered again.

“We gave each other the strangest looks. I mean, there was no way this could be electrical. I had the keys in my coat pocket. My car needs the keys in the ignition for this to happen.”

Saleen thought the little girl could be active, but she and Jackie didn’t feel anything to indicate it. Normally, one of them would feel a sadness or darkness when a spirit was near. This time, they didn’t pick up any vibes.

Jackie took the EMF meter and handed it to Saleen to collect some readings. The meter showed 0 mG – no electromagnetic energy present.

Saleen got back in the car and raised the windows again. The ladies waited a few minutes to see if they would lower. Then, Saleen turned her car off and tried to lower them with the switches on the driver’s side. Nothing happened – not even a click. Jackie tried the switch on the passenger’s side and nothing happened.

They both shrugged their shoulders and prepared to gather baseline readings around the cemetery. As they walked, they could see the car and nothing seemed different. The windows were raised.

They walked down to the spot where Collins Run meets Aux Sable Creek to measure its EMF field and document anything weird. The meter didn’t record any spikes. It also had a digital thermometer built-in, but it was so cold (approx. 27 degrees), it likely wouldn’t record a decrease in the ambient temperature. From this area, the women lost sight of the car.

When they returned to their parking spot, the windows had lowered again.

“I just wish we brought a video recorder to record the car,” Saleen said. “I didn’t think there would be any activity during the day. All the reports say the little girl is active at night. I will not make this mistake again!”