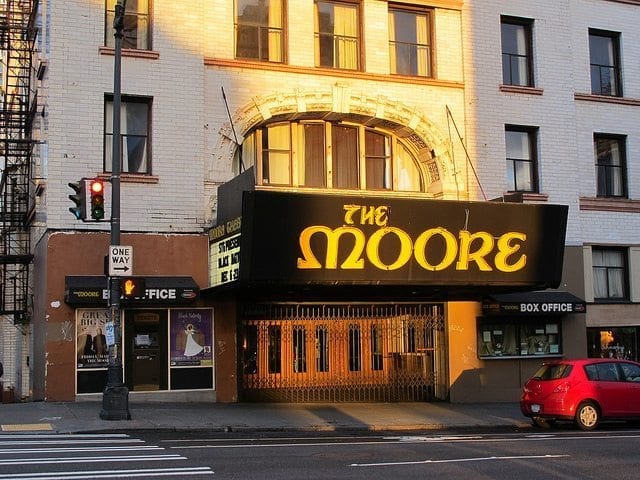 The Moore Theatre in Seattle, Washington is one of the oldest theaters in the city. It’s been used for stage acts, vaudeville performances, movies, boxing, and now concerts. When it comes to ghosts, it’s probably better as a legend tripping destination than a ghost hunt. Find out why after the jump.

A Brief Haunted History of the Moore Theatre

First off, the Moore Theatre never had traumatic events, like fires, to suggest it would be a haunted hotspot. It just went through its life as a place of entertainment. Still, positive emotions can create a linkage to the ghost world. Deceased performers could come back to their favorite spot for one last gig as ghosts.

Most paranormal researchers think a séance held in the late 1970s is really the trigger for hauntings. At the time, the Moore Theatre served as a movie theater. The owners, Darrel MacDonald and Dan Ireland, caught a few employees performing a séance. This enraged the owners, who fired them on the spot. Unfortunately, the fired employees never ended the séance, and this left a ghost portal open in the building.

You can ghost hunt at the Moore Theatre if you get approval from management, and you give a detailed outline of where you want to investigate. They only allow it during the day because they often have performances in the evening. You’ll need to wrap up and leave by 2 PM.

Some witnesses report shadowy figures (not necessarily shadow people) haunting the aisles. There’s also a report or two about a shadowy ghost in the basement. No one’s ever caught one on film.

But, the Moore Theatre isn’t known for apparitions: It’s EVP and ghostly sounds that steal the show.

You can capture the following sound-based evidence:

You can also ‘feel’ the creepiness in the theater, especially in the basement and crawl spaces under the stage. You can feel someone watching you, get psychic chills, feel breathing down your neck.

There are shadowy figures associated with the Moore Theatre, but witnesses rarely talk about them in the real theater. Most witnesses report them in the hotel above. There are 2 or 3 incidents of a male shadow person (with top hat!), who stands over sleeping guests and shoves the bed. These events happened on the hotel’s fifth floor, but there are no reports of deaths/suicides/murders there. But, then again, shadow people are more attracted to people than a place. Maybe the ghost portal in the basement helps them manifest?

It’s difficult to capture evidence at the Moore, so this is why we say go in with a legend tripping mindset. You’ll get some good subjective experiences than hard evidence.

Ghost Hunting Equipment to Use

The usual ghost equipment makes sense at the Moore Theatre. Since sound is the most common evidence bring a few digital recorders and be ready to run an EVP session. If you have one, try a full spectrum digital camera/video recorder. You may capture a shadow figure in the basement or in the aisles. In our experience, a full spectrum camera will do a better job than an infrared camera.

We haven’t heard about any EMF spikes or cold/hot spots in the Moore. You could bring an EMF meter and digital thermometer, but we’re not sure if it’s worthwhile. If your team is just a few people, we say leave them at home. If you have a team with 4 or more members, then it may make sense to bring them to help sweep a larger area like on the theater floor.

As always, drop us a line if you get some evidence.