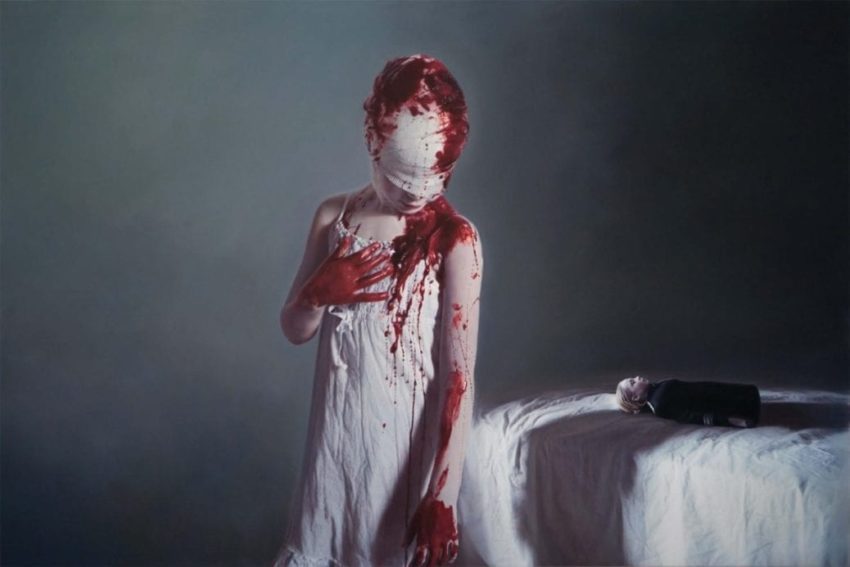 Daria* suffered from depression and an eating disorder. She found relief by cutting herself. But, it attracted a rare specter that wanted to take her life.

Daria almost died at the hands of a Cutter.

Her life seemed simple enough. It was the mid 90s and she lived in an upper middle class suburb of St. Paul, Minnesota. Her mother, an accountant, and her father, a car dealership owner, were happily married. She got along well with her hockey-loving older brother, and had many close friends.

However, Daria had a deep gnawing depression and hated her body. When her grandfather died, she collapsed into despair and started to cut herself. That mix of despair and blood may have attracted the Cutter.

“I had been cutting myself for 3 months when it showed itself,” she says. “At first, it was a blurry gray figure that watched me from my closet. The more I cut myself and cried myself to sleep, the more it took shape.”

Eventually, her father checked her into a treatment center in suburban Minneapolis.

“I never told the staff I cut myself,” she said. “I needed it as a vice. At that time, I had to cut to stop feeling so awful. Now, I realize the evil spirit made me do it. It had a strange hold on me.”

Cutters have unique paranormal abilities that are contrary to other specters. They win your approval with a loving empathic rush so you continue cutting yourself. In time, the Cutter compels you to commit suicide by slashing your wrists.

Daria told Ghostly Activities about the night she broke free from its grip.

“I had a really bad day with my father and the doctors in therapy. I just wanted to go back to my room and make a deep cut. Just let out all my pain. As soon as I got my (cutting) kit, I turned around and the ghost appeared.”

“It was at least 7-feet tall and emaciated. You could see each rib in its chest. It also looked androgynous. There were blood-stained bandages and gauze wrapped over its arms, legs and half its face. Only one black eye peered through the bandages.  It was smiling with coffee-stained teeth.”

“While it seemed gruesome, it made me feel so warm, safe and happy. I would do anything for it.”

The Cutter led her to the bathroom and leaned her back against the side of the tub. It reached out and started stoking Daria’s face, arms and legs. She didn’t notice it was slicing deep into her skin.

“I could see it had blades like scalpels in its fingers, but I didn’t feel them,” she says. “I looked into its face and just nodded yes.”

Things changed once it slashed her inner left arm from the elbow to her wrist. She began to bleed so much, it looked like someone painted the white tile floors with melted red crayons.

As Daria’s blood spurted and flowed down her arm, she told the spirit she wanted to live. That last spark of life may have saved her.

“It stood up like someone pulled a puppet up by strings, frowned and shook its head no. I told it I didn’t want to die: I wanted to live for my mom, dad and brother.”

With that, it retreated from the bathroom and placed itself in a shadowy corner of her room, waiting and watching Daria crawl to the phone.

“It leered at me, staring at me with its one black eye. I could feel it send a wave of comfort and joy to me. It wanted to delay me from calling a nurse, so I’d blackout. If I did that, I knew I’d die.”

She pressed 0 for the nurses station and muttered help into the phone. Then, she passed out on the beige carpeting,  next to the phone, and in a growing puddle of her blood.

“When I woke up, I was in an emergency room bed. My whole family was there and they gave me so much love and support. I knew my life was turning around.”

A few days after the incident, her therapist visited her. He told her they found her cutting kit, but it didn’t have anything like a scalpel in it. He wanted to know how she smuggled one into the center because they check for weapons.

“He wouldn’t believe me, so I asked for everyone to put this behind them and focus on my future well-being.”

Daria has made a full recovery from her depression and eating disorder. She’s now married and lives in Colorado with a 12-year-old daughter. Daria admits she digs around her daughter’s room for anything like a cutting kit.

“I know it’s paranoid, but I don’t want my daughter to have my experience. If I ever find a kit, or think she has my depression, I want to get her help immediately…and stop any supernatural beings.”

To date, the Cutter has never bothered her or her family again.

*Name changed to protect her identity