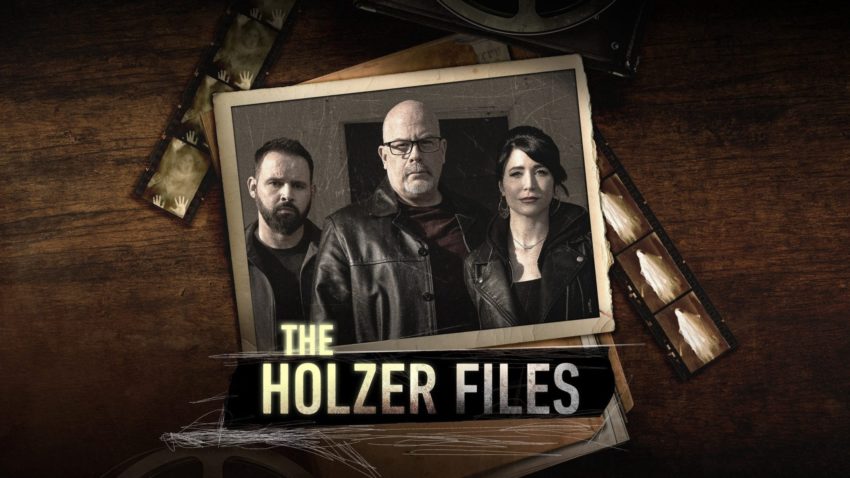 Dave Schrader and his team investigated the Knapp House (Rye, NY) in the premiere of The Holzer Files. In a nutshell, it’s a little bit Dead Files, Ghost Bait and Paranormal Witness. Get my take after the jump.

The Holzer Files digs deep into Hans Holzer’s paranormal cases from 40 years ago. If you don’t know Hans Holzer, many people consider him to be the father of modern paranormal research.

As for the show, 3 investigators re-open Holzer’s cases to see if they can solve the case or uncover new evidence. The show uses real-life recordings from Holzer’s research to give context to the investigation.

Schrader is known for his radio show, Darkness Radio. He’s been involved with the paranormal for years and has appeared on shows like Ghost Adventures, Paranormal State and more.

Kaza is a psychic-medium investigator. She’s studied at Arthur Findlay School of Intuitive Sciences in the UK. Her training involves evidential mediumship, which means the spirit gives the medium information to confirm its identity. I didn’t find much information about her as a ghost hunter, but I’m not sure if you would classify her work as ghost hunting.

Pittman is the tech manager. He leads a ghost hunting team called Fusion Paranormal and hosts a podcast, The Fusion Podcast. You can follow him on Twitter.

Note: I tried to put links to his paranormal team at FusionParanormal.com and ParanormalSocieties; they’re dead links at this time, October 6, 2019.

The show’s broken into 3 different segments: research; investigation; and, the reveal. It’s all the same bits you see on other ghosty shows.

For research, Dave Schrader meets with Holzer’s daughter, Alexandra, and a paranormal researcher, Gabe Roth. All three talk about an upcoming case, which had piqued Hans’ interests in the past. It’s the Peck House in Rye, New York for this episode.

Next, Schrader talks to witnesses. They could be people who lived in the house or experienced paranormal activity. While Schrader interviews them, the editors’ interject Holzer’s real-life recordings. There are also recreations of the haunting or seance (by Ethel Myers).

Kaza now appears to get psychometric readings on a possibly haunted painting. She’s using her abilities to get more details about the ghosts haunting the house.

It turns out the ghosts have moved from the Peck House to the Knapp House. The Knapp House becomes the focus of the investigation at this point.

Kaza and Schrader do a walkthrough with Allie Copeland, and the investigation begins.

The investigation is about 20 minutes of airtime. Schrader and Kaza go to the haunt, and Shane Pittman meets them on-site. The 3 investigators get to work right away. This segment was shot in infrared and thermal imaging.

Kaza runs the show in the episode, not because she’s the lead investigator, because her psychic impressions kick into high gear. She also uses automatic writing at different points.

Pittman then runs an EVP session in a closet/tiny bedroom, where he has personal experiences. Kaza switches with Pittman later on.

Overall, most activity happens in the living room. Schrader has some heebie-jeebies, thermal imaging captures something interesting, and Kaza ‘sees’ a malevolent entity.

The reveal is about 5 minutes of airtime. Schrader and Kaza detail their findings to Sheri Jordan. They show physical evidence, and Kaza details psychic evidence. It reminds me of The Dead Files reveal to clients. Not much more to say about it.

Gadgets aren’t really a focus. For the most part, the team relies on audio recorders and a thermal imaging camera. Pittman does capture a hand print on a window. However, it’s really Kaza who gets the most compelling evidence.

Scientific investigators will probably groan at this. I thought it made good TV.

Not much else evidence was collected. Schrader and Pittman had some heebie-jeebies. Schrader felt breathing on his neck. Pittman had something touch him in the closet/tiny bedroom. But it looks like that was a bug or light switch cord. If you watch the video, you see a black dot moving behind him. I dunno.

There were a couple of EVPs captured, but I didn’t hear any words clearly. It seemed like a matrix.

Now, let’s examine the hand print. It’s clearly human temperature. The thermal imaging camera shows the team and camera crew with red-orange coloring to indicate the temperature as above 80°. The handprint was, too. I don’t see how a hand print could form as warm as a human when the team said it felt cold. Also, Schrader states during the reveal that the hand rolled across the window. But he didn’t provide a video clip, just a pic. This makes me doubt the authenticity of the clip.

There’s a mention of water in the ceiling like Lottie, a suspected ghost, would form when manifesting. But I didn’t see anyone reach into the floor boards to check if it was a leaking pipe. Who knows? It may have been edited out.

I’m on the fence about this show. I really liked the research element and Kaza as a media personality. But the evidence collection is a bit of bust for me. I watch the shows for the team’s interactions and visual evidence. I didn’t feel the chemistry between the team. And the evidence, well …

The strongest evidence consisted of heebie-jeebies, psychic impressions and a hot hand print on a window. The EVPs didn’t sound like anything, either.

Jake’s Rambling: I really hate it when the investigators have to suggest what the audience hears. Your brain will take the cue and trick you into hearing the suggestion. The recording should be clear or don’t present it.

I’ll give it a few more episodes to grow on me, but it’s not live broadcast viewing for me. I’ll catch it on-demand.

UPDATE (March 5, 2020): Now that I’ve watched all the episodes, the show really grew on me and I enjoyed watching it. BUT I like the historic investigation and debunking myths more than the ghost hunting. Dave & Cindy work well together, and the producers do a good job of stitching together Cindy’s psychic insights with Dave’s interviews and archival research.

9 thoughts on “Review | The Holzer Files”