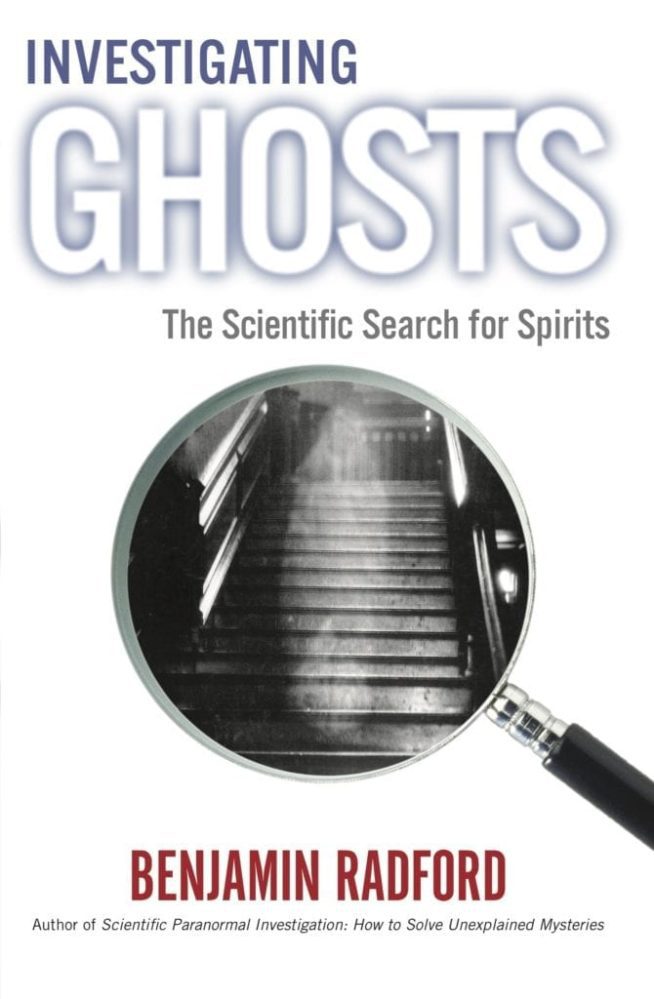 Ouch. With Investigating Ghosts, author and skeptic, Benjamin Radford, applies the scientific method and critical inquiry to ghost hunting practices used by many teams. It stings at some points, but it’s the reality check we need. Get our review after the jump.

Benjamin Radford, the author of Scientific Paranormal Investigation, has finally written a ghost hunting-only book that focuses on how to use science, skepticism and critical inquiry to improve your methods and get ‘good’ evidence. Along the way, he skewers the most popular ghost hunting shows as a way to illustrate their lack of scientific rigor.

Let’s get into the meat of the book now.

In chapter 1, Radford selects the most important figures in ghost hunting over the past 100+ years and their contributions…even those who hoax. This is a good foundation for the remaining chapters in part 1, but I wouldn’t say it’s essential. Most of the other 3 chapters are more closely related to each other. Still, it’s good to know famous figures of ghost hunting lore.

Chapter 2 is essential reading. Using quotes from Carl Sagan to start, then moving into a list of 20+ guidelines, Radford lays out his case for running a skeptical paranormal investigation. He then ends with paranormal TV show case studies. After reading this chapter, I had to reflect on my ghost hunts and how I’ve fallen short. I will take these principles and guidelines to heart for my later ghost hunts.

I found chapter 3, A Phenomenology of Ghosts, misplaced. I understand why it’s here: It tells you about ghost hunters’ common assumptions. But, it jumps from definitions, to Singapore Theory, to hoaxes and ethics. It can leave you a little confused, especially after the very logical and structured second chapter. Still, it has good points around the varied definitions of a ghost. If you can’t define what a ghost is, you can’t make experiments to test for them.

My simple recommendation for a later edition would include:

Again, this information is all useful, but just misplaced in chapter 3.

Chapter 4 hurts, but it’s a pain that will make us better. In this chapter, Radford destroys common ghost hunting assumptions and practices. He also points out that we investigate anomalies, not really ghosts. Then, he proceeds to list out 9 techniques and processes ghost hunters use, and why they’re mistakes.  Chapter 4 is also critical reading, and I’ll use this info to correct for previous mistakes in evidence collection.

The last chapter details how to better use equipment on ghost hunts. The fact is most gear isn’t designed to find ghosts. Radford tells us the limits of each piece of equipment, like EMF meters and infrared cameras. But, he also states better gadgets to use and how to use them. It’s all very helpful and something I will take to heart on new investigations.

In summary, part 1 is critical reading for ghost hunters.

In the second part, Radford examines how ghost hunters analyze their evidence. He puts photographic, video, audio, print, sensory and psychic evidence under his microscope. To me, the standout section is how he sifts through EVP collection and analysis. Then, he debunks how ghost hunters analyze EVPs with his knowledge of sound and radio waves. It seems a bit dour for what we thought was tried-and-true methods. But, Radford gives us a new way to test for EVPs and how to verify the possible ghost voice.

As for the sections on film and photography, we’ve read most of this before in other books, like Capturing Ghosts on Film by Chris Balzano and Ghost Photography 101 by Fiona Broome. I would say Radford’s approach to better analyze evidence and matrixing considerations is the best material from this chapter.

In the last 2 chapters of this section, he talks about the problems with using psychics, and how our senses and feelings can cause us to think a ghost is near. Radford references many other books (including his own) to illustrate these psychological and sensory aspects (chapter 9), which makes this seem more like a college student’s psych 201 paper. He does include analyses of ghost hunting shows and popular cases from media, which is helpful in absorbing the material.

In summary, there’s still worthwhile information in part 2. You should read it, but you may have read it before somewhere else. This is a solid section for new ghost hunters.

The last part has cases and experiences Radford directly worked on. This is one of the better parts of the book. I found chapter 10, Film and Video Cases, to be the best and most concise read. He breaks down 7 cases from photos, videos and YouTube postings, then slices them apart to find inaccuracies. This chapter will help thousands of arm-chair researchers out there. The cases selected do not appear in Radford’s other books, so this is a bonus.

Continuing with his own investigations or experiences, chapter 11 details Radford’s experience on a reality TV show in Canada, Encounters. At this point, Radford has already debunked and critiqued shows like Ghost Hunters and Paranormal Lockdown, this chapter seems redundant. It’s a good way to understand how TV producers shape the paranormal narrative, but it didn’t need a chapter. Maybe it could be combined with the last chapter?

Speaking of which, chapter 12 piggybacks on the Encounters TV pilot. Radford investigated the origin of Fort George’s well-known ghost, Sarah Ann. I won’t spoil his findings, but this chapter plods through every argument for the ghost’s existence. Then, he contradicts a few paranormal experts, like Jeff Belanger.

The other parts of the book aren’t mandatory reading, but you may like to read Radford’s other investigations. You can find those under the Conclusion and Further Reading section. It also has a thorough references section, which I used to order more books on scientific ghost hunting. The Introduction sets up his case for scientific investigations, but you’ll get enough of that in the second chapter.

I recommend the book. Part 1 alone makes the book a worthy buy. The case studies reinforce Radford’s approach to ghost investigations. In parts, the material can be dry and reference too many outside sources, but the overall work has merit.

And it can make us better investigators. I bought 2 copies; one for my library, and one for my team.

On Amazon, the paperback version sells for about $20 and the e-book sells for under $14.

2 thoughts on “Review | Investigating Ghosts – The Scientific Search For Spirits”