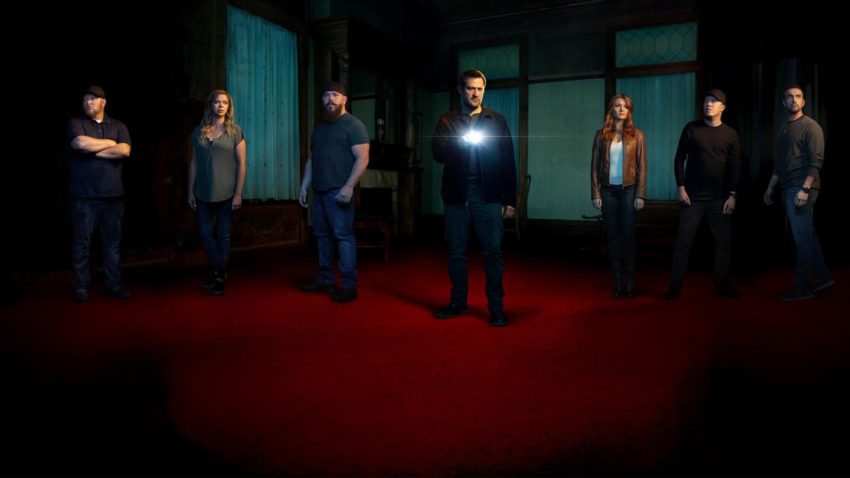 On August 21st, Ghost Hunters returned with a new cast and new network, A&E. Get the scoop on Grant Wilson’s new team after the jump.

Grant Wilson and a new group of investigators returned to TV on Wednesday night. It’s been 3 years since the original series ended. Now, Ghost Hunters switched to A&E from SyFy, its former home.

In this review, I’ll look at the new team, tech, evidence presented and my overall impression of the show.

By the way, SPOILER ALERT IS ON!

Only Grant Wilson returns from the original series. I want to point out that the show tells you the team was assembled for the series. Most other shows will hide that.

By the way, I like to put the members’ home states. Just a little state pride, eh?

We all know Grant from the original series and his appearances on other ghost hunting shows. You can follow him on his Facebook page or website.

Kristen has appeared on Ghost Mine, another SyFy paranormal show, a few years ago. The producers skipped over that. I’m not sure why because it gives her more paranormal cred. Anyway, she’s also appeared as a guest investigator on the original Ghost Hunters series. She’s a hypnotherapist when she’s not investigating.

Note: I’m assuming she’s originally from Oregon because she went to Portland State University. I think she lives in California now. @Readers: Correct me in the comments below and I’ll fix this part.

Daryl has investigated ghosts and paranormal phenomena since 2008. He has a popular streaming talk show, American Ghost Hunter Show. You can get more about him at his personal website.

To me, Brandon was the breakout star of the show. He is a no-nonsense gadget guy, who spewed ghostly facts. I couldn’t find much about him online, other than his personal website and Twitter profile. His team is APRA.

Brian is a former Marine and he began investigating the paranormal in 2007. He’s the leader of Riverbend Paranormal in Illinois. I didn’t find much else about him online, but he has a decent bio on the Ghost Hunters Wiki.

Richel is a member of Riverbend Paranormal with Brian. She has investigated the paranormal for a decade. There’s not much about her online, but she has a page on the Ghost Hunters Wiki and a Facebook profile.

Mustafa is a journalist for Distractify. The team uses him to research a haunt and get the facts. In the premiere, he gets the scoop on 2 urban legends at Pocatello High. First, no one hanged from the chandelier. Second, there was never a swimming pool at the school, so no one drowned there. He’s a newbie to ghost hunting. You can follow him on Instagram.

In all, it’s a congenial group. However, I have a quibble: Mustafa whispers during his parts of the investigation. That’s a big no-no and pegs him as a rookie.

The investigation was the longest part of the episode. It took up 60% of air time. The team broke up into 3 smaller groups to investigate each hot spot.

The one thing I didn’t really get is why 2 co-lead investigators were put together (Kristen and Daryl). Usually, the leads take the less experienced members with them. For example, Brandon (tech manager) and Mustafa (a newbie) spent a lot of time in the gym, and no lead investigator went with them. Now, Brandon could be a lead investigator, but he’s positioned as the tech manager on the show. Anyway, this is just a quibble.

I do like how the producers added a montage of the first series and Grant’s decision to return to ghost hunting.

First off, Grant began with debunking the apparition captured on a security camera. He and Brandon seemed to know the natural cause and it was the first thing they focused on during the investigation. Other debunking included the flickering hallway lights. Brandon had a local electrician review the footage and give a reasonable explanation for it.

Back to the tech …

The team used equipment you and I would use on a ghost hunt. This is what I saw them use:

It was refreshing to see the team skip the ITC devices and Kinect cameras. If I remember correctly (keep me honest here @readers), the original team didn’t use spirit boxes much, either.

As for the evidence, there wasn’t anything sensational. They caught a couple of Class B or C EVPs, and no apparitions. The most compelling evidence was the lights dimming in the auditorium, heebie-jeebies in the gym, and battery failures next to the Tesla EM pump.

It was all stuff a regular ol’ ghost hunting team would capture.

I do have a quibble with the evidence analysis part of the show. The team members reviewed their data in their rooms, except Richel and Brian. I hope they have team analysis like the original series. It was always fun to see Tango slap Steve and say “listen to this!”

It felt real, didn’t it? That’s not something we’ve seen in recent years. If you read my post on reality tv, Ghost Hunters 2019 puts the kabosh on over-the-top ghostly encounters.

Overall, this was the best premiere of a ghost hunting show in some time. It could be nostalgia or familiarity, but I got pulled in right away. The pacing was brisk; the cast congenial; the location interesting; and, the evidence was just ‘meh.’

And most ghostly evidence is ‘meh’ in real life.

I’ll continue to tune in, and I hope the show doesn’t pick the sensationalized ghost hunting habits on other networks and shows.

You can watch Ghost Hunters on A&E, every Wednesday at 9 PM ET.