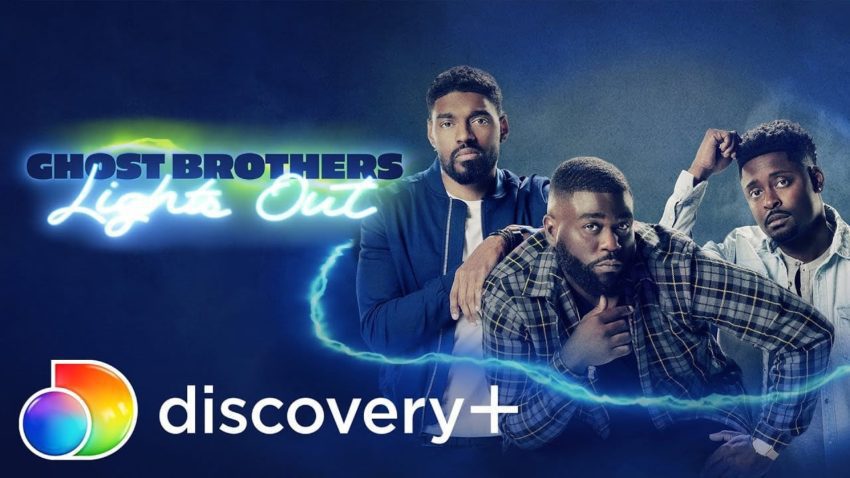 Ghost Brothers: Lights Out debuted in April 2021 on Discovery+ as a streaming exclusive. It follows a trio of ghost hunters investigating some of the most haunted places in the US. Get the review after the jump.

The original Ghost Brothers series debuted in April 2016 and had a follow-up season the next year. After that, it got a subtitle, Ghost Brothers: Haunted Houseguests. I don’t know if that means it was the third season or not.

But Ghost Brothers: Lights Out debuted on Discovery+ as a streaming-only premiere in April 2021.

On IMDB, it’s using this summary:

The Ghost Brothers ‘Dalen Spratt, Juwan Mass and Marcus Harvey’ are the dopest brothers on television hunting ghosts. These candid and unorthodox paranormal investigators explore disturbed hotspots across the country, checking out and sizing up local legends and supernatural stories. They are ready to expose the haunted holdouts still hanging around these locations – and why they don’t leave.

Let’s just count this as the fourth season for our collective sanity, eh?

For this review, I’ll look at a few elements and then an overall impression to determine my recommendation. Remember, this analysis is through the lens of a real-life ghost hunter.

This review will focus on Season 3 Episode 4 (S3E4), “Cross My Heart,” which was filmed at Yuma Territorial Prison and featured Cindy Kaza of The Holzer Files.

I couldn’t find much about their ghost hunting background before the series began. They have appeared in other Discovery+ paranormal TV shows, like Haunted Salem Live from a couple of years ago. More recently, they appear on Fright Club with Jack Osbourne of Portals To Hell.

This episode takes place at Yuma Territorial Prison in Arizona. In a nice twist, the cast jumped right into investigating with little-to-no information about its haunting. Dalen then gives some historic voiceover with recreations and archival photos playing in the background. He really made the place seem like hell.

Juwan makes a point to call out they’re the first to investigate the women’s block. Most of the other goodness dropped during Dalen’s narration.

But Marcus interviews historian, Tina Clark, about the worst-of-the-worst conditions, cells and other locations. They get into the bloodiest history of Yuma Territorial Prison. It’s a nice setup for the rest of investigation.

Andrew Jimenez, the great, great grandson of Elena Estrada, describes his ghostly encounters with a dark entity that wanted to hurt him. That’s about it for further research on the location. It just serves the ghost hunting action.

Needless to say, the ghostly activity starts right away, and dark entities abound. Cindy Kaza of The Holzer Files swings by to drop some psychic foreshadowing. Marcus had better watch out.

Most of the episode deals with using spirit box apps, relying on infrared stationary cameras, and trying to re-create life in the prison.

The team only does one experiment together by the main gate, then they split up. Dalen goes to the graveyard and gets in a coffin. Juwan heads to the women’s cell block to communicate with Elena. He even had a heart to use as a trigger object (Note: This would only happen in a ghost hunting show). Poor Marcus got stuck in the Dark Cell.

Inside the coffin, Dalen uses a spirit box app and runs an ITC session. Juwan held the heart and used a REM pod and Ovilus to see if Elena would talk to him. Poor Marcus used shadow detectors to see if something may manifest. He started to meltdown like many prisoners did.

I thought these were strong experiments to run, but I question the heart trigger object. First, what kind of heart was that? It was freaking huge. Anyway, I did like the recreation with the coffin. That would be interesting to try with someone outside watching the bell. Anyone could have rung it to get a reaction. Also, the graveyard didn’t seem to be a hotbed of activity. I’d cut the coffin out and find another spot to investigate.

Anyway, Marcus and Dalen were about to lose it during their experiments. You never want to split up on an investigation. I mean, there were camera operators and producers roaming around, so they weren’t alone. Splitting up isn’t something I’d recommend in real-life.

Ghostly gadgets really tell me if you’re serious about your data collection. There’s a slew of gear that generates questionable results, but it appears to be legit. Those are the ones Ghost Brothers use most often.

In this episode, Ghost Brothers used the following equipment:

Oh dear. 4 of the 6 gadgets used are so unreliable, you can’t believe anything. At least they didn’t use a K2 meter. Anyway, I’ve covered garbage ghost gadgets in a previous post. I will say, the team has improved their techniques over the past 3 seasons. BUT … they need to change that gear. These gadgets make good TV because you can see and hear them tell you that a ghost is near. It’s just that, it’s probably not a ghost. It’s the gadget’s programming that makes the ghost.

As you can guess, the evidence collected is now highly suspect, which means the next section isn’t going to go so well for Ghost Brothers.

I’ll just cut to the chase on this. Ghost Brothers collected the following evidence at Yuma Territorial Prison:

The team did try to debunk the shadow figure, so props for that. They didn’t try to debunk any evidence after that. Most of the other evidence is suspect. That’s because the gear they used is (mostly) garbage. Spirit boxes, mobile apps, SLS Kinect and Ovilus throw so many false positives, you can’t trust anything they state.

However, the REM pod is usually reliable. I was disappointed the team didn’t try to debunk the hits. It could be bugs, spider webs, or other natural reasons. The REM pod was used in open air areas, so the chance of a natural cause increases. To be fair, the editors may have cut those parts out.

The most compelling evidence included the shadow figure and bell ringing in graveyard. I do question the bell ringing because it was an open area. You don’t know if someone walked by and jiggled the rope. The audience didn’t see a full playback of the experiment.

I’d throw out the rest of the evidence they collected because of the gadgets they used.

I thought Ghost Brothers first season was pretty awful. It didn’t seem like they knew what they were doing. It was like watching kids fumbling around with a bicycle before they learned to ride one. Things are much different now.

The show’s production is top notch. The storytelling is simple and clear. The pacing is brisk, and there’s a good mix of dark history with contemporary ghost hunting. I really like how Ghost Brothers jumps right into an investigation, then fills in the backstory at the haunted location.

Should You Watch Ghost Brothers: Lights Out?

It’s a well-made show with an engaging cast. They go to some great haunted places, but I can’t get over the garbage gadgets they use. As a someone who takes pride in more objective data collection and debunking on an investigation, I can’t give the seal of approval to Ghost Brothers: Lights Out at this time.

Ghost Brothers: Lights Out streams on Discovery+. It’s made by Painless Productions.