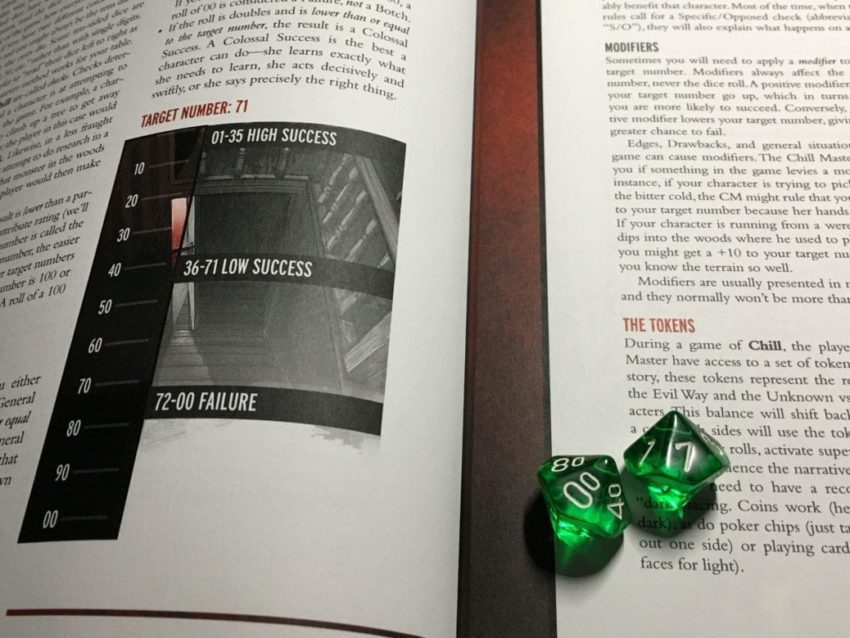 Chill is an unabashedly fun, horror roleplaying game for people who want adventure by killing monsters, clearing ghosts and dispensing baddies. Get the full review after the jump.

Chill 3rd Edition happened after a Kickstarter campaign in 2014. It’s an update to the earlier edition from waaaaay back in the 80s and 90s. This game hit the shelves in the summer of 2016.

Since that time, Growling Door Games has released 2 supplements through successful Kickstarter campaigns, and third one arrives in February 2019.

More on these supplements later in the review.

The setting is a critical factor for any game. If the players don’t feel immersed in the horror setting, the entire game suffers.

This is something the game designers got right. It opens with a Foreword with some game history and what inspired its creation. Then, it moves into my favorite part, a short comic-style story, which shows you what it’s like to live in the world of Chill.

The game doesn’t hide that you work for a secret society that hunts ghosts, kills monsters and tries to save the world. To me, it’s like the funnest episodes of Supernatural, a monster movie from Saturday afternoon TV, or horror comedies on Netflix. The game is flexible enough that you can make it has light and fun as you want, or as dark and serious as you’d like. The Chill Master section, Chapter 5, goes into enough detail to craft a story, setting and developing tension for a campaign.

I also like that Chill takes place in the present. That’s just my preference. Other popular horror settings go back to World War II or even earlier. It’s hard for me to get into it because I wasn’t alive: I have no connection to those periods.

However, there is one part of the core rulebook that’s become redundant: The History of S.A.V.E. Now, the section is worth reading. It helps develop the setting and a dark legacy for your characters. But, it’s nearly 75-pages long and Growling Door Games released a supplement for it. I say you can breeze through it and take what you want. Then, get back to making a character and bashing monsters.

In Chill, you play a normal human fighting the Unknown (monsters, ghosts and other badness). Your character is an envoy, or agent, for the secret society, The Eternal Society of the Silver Way (a.k.a. SAVE). For that reason, you won’t get players with super-hero like abilities, but you will get some supernatural abilities.

The makers have three ways to create characters:

Based on the archetype, you can make some changes to core abilities. The developers go through process step-by-step and use levels of specializations to increase a base score. You can use a pool of character points (CP) to add to your base points, too.

The skills and attributes section is very familiar if you’ve played the World of Darkness games (now Chronicles of Darkness, or COD). Chill’s seems like a mash-up of Second Sight from COD if you want your character to be in tune with The Art, a way to use psychic abilities. The book has a section on The Art (Chapter 3), so I’ll stop here. It’s mandatory reading for the game.

If you’re familiar with character creation in other roleplaying games (RPGs), then this will be easy to pick up. There’s nothing unique about the Chill character-creation system. For new players, I’d say use the pre-made characters to play right away.

In all, Character Creation is my favorite part of the core rulebook. The designers made it simple to understand and put a lot of care into it. They’ve done a fine job of developing skills, advantages and drawbacks.

I found the mechanics to be pretty simple. The game uses two d10 dice to roll for a success on a scale of 100 (a ’00’ result read as 100). Then players can use a token to modify their difficulty score by 10. This is called ‘turning a token dark.’ The Chill Master (CM) uses the same system, but for monsters and other non-player characters. When a CM modifies a roll, it’s called ‘turning a token light.’ I tend to use quarters for tokens; the heads is dark and the tails is light.

You will use this system of rolls for everything from driving a car during a chase, to shooting a werewolf behind a tree, or using psychic abilities. Master it. It requires adding, subtracting and dividing in your head. I’d also say it’s more on the CM-side to do the math. This type of rolling helps the action move as it should in a horror-adventure game.

The really gory details of the mechanics sits in Chapter 4, Game Systems. Read this one carefully, but it all makes sense if you’ve played RPGs in the past.

Note: This system reminds me of the TSR game, ‘Marvel Super-Heroes,’ from the 80s and 90s. The exception is that players don’t shift columns left-or-right to modify difficulty or use Karma to change a roll. I miss that game.

This section kicks off with giving monsters attributes and powers much like a player character. This lets the CM create some interesting combinations and unique critters.

There’s nothing too outside-the-box that monster making is difficult. I liked the use of EWS (Evil Way Score), a number that details how sentient the monster is. The higher the score, the more diabolical the monster is. I like it.

Monsters also have their own powers, much different from the players. I won’t go into to detail here for space, but it’s definitely a well-crafted list of powers, levels and use cases for the game. This part is much easier to understand than the Call of Cthulhu game.

Now, let’s talk about the monsters themselves.

Growling Door Games has planned or released a couple of supplements to cover more monsters. This chapter has subsections for different classes of critters. These include:

There’s some interesting takes on different monster classes, but you’ve probably heard about them before. It’s also a technical description that lets players and the CM understand how the monster attacks, its weaknesses, and other game play tips.

Like I said, there’s supplements that dive into these critters deeper. The section reads like a Monster Manual from D&D, but I think this part calls back to Chill 2nd Edition.

For the most part, the game has a beautiful layout. Now, art will be subjective for the individual, so take this with a grain-of-salt. I think the art and design has just as much impact on world-building as the text does.

Its design reminds me of White Wolf’s templates, but not as dark. The artwork could be hit-or-miss, and it’s mainly miss in the Monster section. The manipulated photos are incredibly well-done; it’s the painted monster imagery (pages 255-284) that falls flat. If you compare the vampire imagery (pg. 276) to the East Asian Vampire illustration across from it, you can see the big difference in quality. It harms the overall impression of an otherwise well-done book.

The navigation inside is easy-to-follow and section headings are intuitive. I didn’t have a problem jumping around or scanning pages to find what I want about characters, abilities, monsters, game mechanics, etc.

This sourcebook doesn’t repeat the monsters found in the core rulebook. It adds about 16 new critters (well, digital entities partially repeats). The designers use the front part to describe monster origins, habitat and how to fight one. The back section (Creatures of the Unknown) has the game play technical details like the Monsters section in the core rulebook.

It adds to the monster collection of the world, but it doesn’t try to add anything new to creating a monster for your cases.

SAVE | The Eternal Society

I like this sourcebook quite a bit. You get more details on developing a headquarters, 4 cases, 10 new monsters, some new details on envoy development, and all kinds of documents from envoys and headquarters.

In retrospect, it makes me think of Hunter: The Reckoning sourcebooks. Anyway, this is my favorite supplement at this time.

I got my PDF version in December 2018. The physical book arrives in February 2019.

Undead goes into more depth about zombies, revenants, remnants and other re-animated corpses. It follows the same structure as the Monsters sourcebook with technical game play details in the Creatures of the Unknown section.

I think this sourcebook has too much background story and not enough monsters. It’s worthwhile for the monster details, but it’s not as strong as Monsters, the supplement.

Anyway, my favorite section is the opening comic book section.

I really like it and play it a couple of times of month. Overall, I think it’s easier to pick up than other games in its class (Call of Cthulhu, Chronicles of Darkness, and Savage Worlds: Deadlands). And the action can move fast.

You have a lot of freedom to create your own horror world, base one on paranormal pop culture, or convert one from literature.

The current player and monster creation process is easy, but I think more complexity will be needed in later supplements. New players to RPGs will find the system simple and robust enough for their needs. As they get more experience, then they might seek more nuance in their characters. CMs may also look to the supplements for more detailed monster-making.

I like the contemporary setting, game flow, and fun cases you can develop. You can order a copy of Chill 3rd Edition at DriveThruRPG.com.

You can also download (free) cases for the game, too.