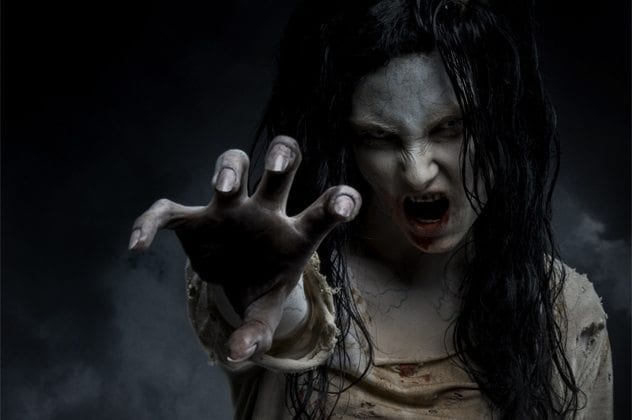 Poltergeists and ghosts aren’t necessarily the same things. Read about their differences and how you can clear poltergeists.

Poltergeist comes from the German for ‘noisy spirit.’ If you have one, you’ll know it. They slam doors, toss objects, turn over furniture, bang walls and, well, make a lot of noise. They’ve also been known to turn off/on appliances and faucets.

Poltergeist activity is widely misunderstood. People often mistake ghostly activity for a poltergeist. This is how you can tell the difference between them:

We can look to comparative studies for patterns and clues. Many parapsychologists believe poltergeists are disembodied spirits or ghosts, but there is also a competing theory, telekinesis.

Some experts believe humans actually cause poltergeists. A theory explains that a person in the house has telekinetic abilities. These abilities appear during times of stress or trauma. This phenomenon is called Recurrent Spontaneous Psychokinesis. In most cases, the person with telekinesis doesn’t know he or she has it.

There are still investigators that believe poltergeist activity is demonic. However, exorcisms have no effect on poltergeists, which tends to discredit the demon theory.

A key reason these entities should not be considered ghosts is that poltergeists cannot form an apparition. You can see or hear activity, like the noise mentioned earlier, but you never see the poltergeist. If you do see something, you likely have an ‘area haunting,’ which also generates EMF spikes and EVP.

According to Nathan Brown, author of ‘The Complete Idiot’s Guide to the Paranormal,’ there are 5 stages of a poltergeist haunting.

5 Stages Of A Poltergeist Haunting In Detail

Most people aren’t aware anything is wrong. If something does happen, it’s dismissed as a freak occurrence, like pictures falling over or off the wall. There are a couple of things you can look for:

At this point, cold spots increase. Entire rooms may seem colder. You may also notice unexplained scratches or cuts on furniture. Some people may find light scratches. Pets may avoid the person targeted by the poltergeist.

Things really start to happen at this phase. You can’t ignore its presence anymore. Appliances begin to turn off-and-on. Locked doors and windows open. You also begin to hear banging. In some cases, it scratches people so hard, they bleed a little.

The poltergeist begins to target an individual in the house. This is usually an adult with emotional distress or a teenager, but it could be someone as young as 10 years old. It will throw objects at its target(s). Doors will slam closed on people. Usually, a successful attack will not seriously hurt the target. They may get a few bumps and bruises. However, poltergeists have been known to throw people over railings or down the stairs.

At stage 5, you should leave your house. The poltergeist now has the power to kill someone. Anyone in the house is at risk, especially the targeted person. Scratches seem more like gashes. Furniture is destroyed. Small fires spark at different places. And these sparks tend to get on drapes and furniture, which can burn the house down. Unfortunately, poltergeists don’t physically manifest or ‘speak’ into EVP collection equipment. That means you’ll most likely never learn why you were targeted. If they did, they’d classify as specters.

How To Clear A Poltergeist

In many cases, you won’t be able to clear the poltergeist. That’s especially true if it’s human-centric. With these poltergeists, you have to get the person to work out their issues. Human-centric  poltergeists will follow you to new locations, like another house.

For spirit-based poltergeists, most of the protection and clearing techniques you’d use for ghosts would work. However, these are likely to anger the poltergeist and increase activity. If you want to clear it, go all-in and use the most powerful herbs, stones, exorcisms, spells, prayers or other clearing techniques. This situation can escalate fast, so use experts.

If you leave the house and the poltergeist follows you, you probably have a roaming spirit brood  or a specter on your hands. These spirits will eventually leave you alone, especially if you try to clear them often. Also, both types will leave EVP, have EMF spikes, and manifest as apparitions. This makes them much easier to identify.

And, just as a word of advice, don’t use Ouija boards or tarot cards to communicate with it. That’s likely to also escalate the situation.

We don’t believe poltergeists are ghosts, but psychic energy that finds a way to manifest. That doesn’t explain the intense cold spots it generates. But, it may be an energy trade off between our physical world and the psychic plane. We also believe it’s psychic energy because most poltergeists go away as a young person ages into their late teens and/or learns to control their emotions.

8 thoughts on “Poltergeists | Not Necessarily A Ghost”