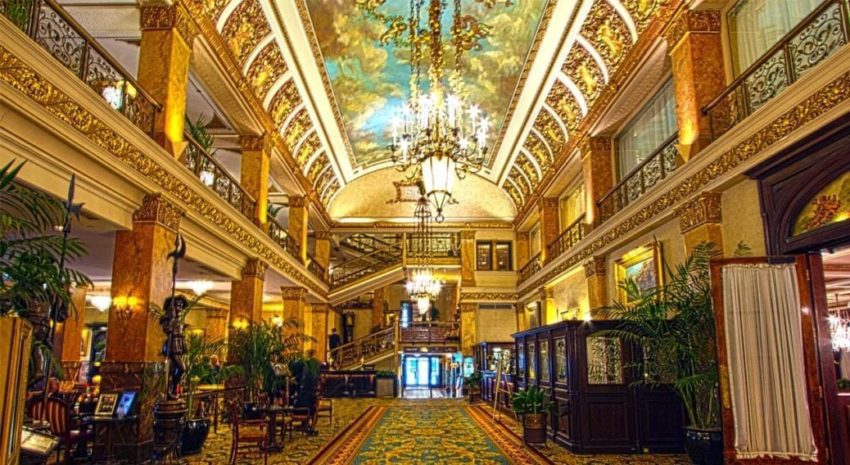 Tom checked into the Pfister Hotel in downtown Milwaukee. He would meet a few business partners and clients over the next few days, and the hotel was in a good location to their offices. He wanted to take his time and get some sleep, a luxury for most of his trips.

But the Pfister Hotel’s ghostly residents had other plans.

He checked in and headed to his room on the 17th floor. It was January and the hotel wasn’t busy. Tom didn’t count more than a few guests in the lobby and restaurant. He was alone in the elevator and the hallway to his room was empty. The hotel was still.

After receiving his bags from the bell hop, he took out his clothes for the next day and placed them on the bench at the foot of the bed. Then, he put his Dopp kit in the bathroom, and turned on the TV to watch college basketball game. Now settled, he ordered room service.

“My first call to room service disconnected,” Tom said. “There was a crazy static on the line, so I thought it was just old lines in the hotel. The second time I tried, I got through but the call would cut out every few seconds. It cleared up after I repeated my order 3 times.”

This was his first stay in the hotel and, while static on a phone line is an annoyance, it wasn’t the weirdest thing to happen.

“Ten minutes after I ordered a late night dinner, I heard knocks on my door,” Tom said. “Just 3 taps. I thought it was the server bringing my food. She told me it would take 30 minutes, so I was a bit surprised it could be ready this soon.”

When he opened the door, no one was there. He looked both ways down the hall. It was empty. Tom thought another guest may have kids and they were playing a game.

When the server arrived, he asked if she had seen anyone in the halls tonight. She told him there were 4 guests on the floor, including him, but there were no children staying on the seventeenth floor.

After the game ended, he decided to get ready for bed. It was now 11 PM. He set his phone alarm to go off at 7 AM and pulled back the covers. He clicked the off button on the remote control. As the TV screen faded to black, he saw the silhouette of a man reflected in it.

“I thought it was a burn-in of one of the game’s broadcasters, but the figure wore a hat, like a Tyrolean hat. One of those German hats with the little feather on the side,” Tom said.

He shook his head to wake himself up a little. He had flown in from Phoenix with a long layover in Minneapolis. He thought fatigue made him see things that weren’t there.

“At this point, I got a little scared. I hadn’t left the room and my Dopp kit was zipped shut,” he said. “I may have been sleepy, but I would have noticed someone come in.”

After brushing his teeth, he got into bed. It was about 11:30 PM, when he checked his alarm settings again. He also set the digital alarm clock on the table next to the bed.

Tom told Ghostly Activities that he had a troublesome sleep. He felt a pressure on his chest and he couldn’t breathe well. It seemed like sleep apnea, but he never had it before. He also had to turn up the heat a few times. The thermostat read 70 degrees, but it felt much colder, even under the covers. He thought there could be a mechanical problem and made a note to tell the hotel about it the next day. It was now 2:15 AM.

Again, he had a restless sleep, tossing and turning, and feeling colder.

He remembered rolling over and hearing a deep laugh. He reached for his phone to check the time, but the digital display showed a blinking “00:00.” He looked to the digital alarm clock and it was dead—the power had gone out.

He sat up in bed and turned toward a shadow he saw at the foot of his bed. His clothes flew off the bench and hit him in the face. Then, something pushed down on his shoulders, knocking him back in his bed. The shadow laughed again.

He laid pinned to the bed for a few more seconds and managed to get free. He flung his crumpled clothes to the floor and ran toward the door. It wouldn’t open.

“I just murmured to myself that I was going to get the fuck out of this place,” Tom said.

As he did, the power returned and the room felt warmer. It was now 3:33 AM.

Tom went downstairs and said there was a problem with the room’s heat. The front desk manager switched him to a different room. He remained at the Pfister Hotel without another ghostly incident.

The Pfister Hotel is a well-known haunted place in Milwaukee. In 2011, Travelocity named it as one of the most haunted hotels in the US.