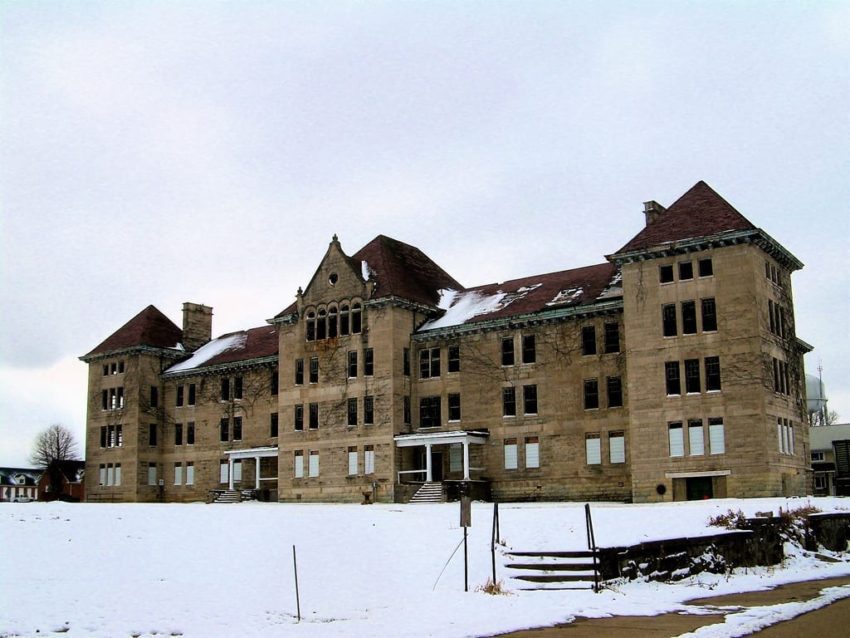 Peoria State Hospital had two starts. Originally, it used the Kirkbride layout, but the Illinois government deemed it unsafe for patients. Then, developers used the cottage plan, like nearby Manteno State Hospital, in the early 1900s. For most of its history, the hospital did a fine job caring for its patients.

That may be why there are few confirmed ghosts haunting its halls.

UPDATE (November 24, 2017): The Bowen Building has been demolished and cleared from the site.

Unlike most of the other asylums we’ve covered, the asylum’s director, Dr. George Zeller, took good care of his wards. It was the Illinois government that let down the patients in the 1960s and early 1970s by slowly cutting its funding. The overwhelmed hospital staff tried to help its patients, but failed to keep up. Large-scale neglect resulted. The Illinois government officially shut it down in 1973.

Over its history, doctors did use lobotomies, electroshock and water therapies to help patients, but they used them on the most dangerous or severely handicapped patients. In all, doctors performed 94 lobotomies on the most insane people. Most agree there were never abusive studies. The hospital had the highest cure rate in the country, but it was also the most expensive. That expense led to the slow budget cuts that finally pushed Peoria State into neglectful and deplorable conditions.

You want to focus on two areas on the Peoria State Hospital campus, the Bowen Building and the graveyards.

You want to schedule a tour to see the Bowen Building. Ever since Ghost Hunters and Ghost Adventures visited, people have tried to trespass. Police patrol the campus looking for trespassers, so pay to get access to the site. It’s better to book the 1 hour 45 minute tour. You may pay extra fees for more access to the site and a longer tour. Save The Bowen offers an overnight investigation. Use this link to get the details: http://peoria-asylum.com/services/ (Ed: Site no longer available as of May 19, 2017).

You don’t need to pay to visit the cemeteries. Illinois has strict rules for visiting. In general, all public cemeteries open from dawn through dusk. No one may visit at night.

Most visual evidence came from infrared sources, including the shadow person captured by Ghost Hunters. If you just want a good thrill, bring along a basic EMF meter, voice recorder and digital camera. You need to bring your own flashlights if you go on the tours.

For a map and directions from the airport to Peoria State Hospital, please use this PDF (peoria-airport-to-peoria-state-hospital-map-directions).

There’s only one confirmed spirit active at Peoria State Hospital. Manuel Bookbinder, or “Old Book,” haunts the graveyard, not far from a large elm tree. He led the grave digging and mourning duties for the hospital with a team of 6 non-violent patients. Back then, most deceased patients’ bodies went unclaimed by their families. In those cases, Dr. Zeller had them buried in one of four graveyards around the hospital.

Ironically, Old Book died at 32 from bizarre–and undocumented–circumstances. Dr. Zeller had him buried in the largest cemetery by an elm tree. Witnesses at Old Book’s funeral claimed to see him mourning his own internment in 1910. More recently, Ghost Hunters, the well-known reality TV team, may have captured his ghost in the graveyard (video below). Also, local paranormal researchers believe the elm tree is a spirit locus on the property.

Above: Ghost Hunters captured a shadow person along the cemetery’s perimeter. Source: Altered Dimensions on YouTube.

GhostsnGhouls.com posted an apparition picture (below) in Sept. 2013. The photo’s authenticity has not been determined yet. The picture is not a reflection because there is no glass in the window.

Most of the cottages have converted to private use or they were demolished. The iconic Bowen Building remains at the corner of W Pfeiffer Road and Enterprise Drive in Bartonville, Illinois.

Developers have tried to get public and private funds to restore the administration building, but it seems bureaucratic delays have slowed the restoration process. Vandals have ruined much of the interior of the Bowen Building.

Save The Bowen, a non-profit organization, tries to raise funds to restore the remaining buildings. They do this by offering ghost hunting, an online store, and gift shop. The money does go into the restoration. They also accept donations.