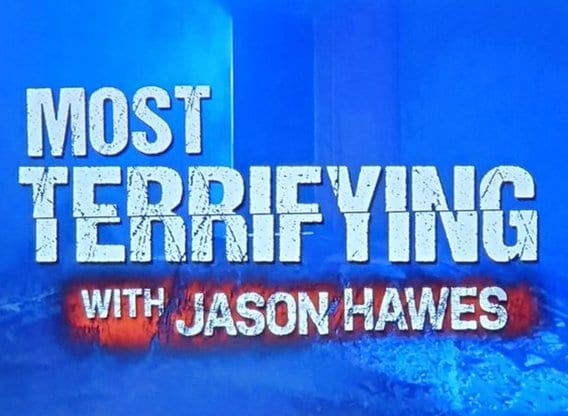 Jason Hawes, of Ghost Hunters & Ghost Nation fame, hosts a new series, which depicts ghostly encounters at some of the most haunted places on earth. Get the review after the jump.

To be honest, this show snuck up on me. I had no idea it was happening until I saw it on my Facebook feed about a week before it aired. It makes me wonder if this show got rushed through the production process. I went looking for mentions of it across the Web, but didn’t find much. I only found a Travel Channel press release that has the series premiere. Usually, Haunt Jaunts has this stuff pegged well before a debut, but they didn’t have this one mentioned. It was just a programming note under “Travel Channel Paranormal Programming Highlights Nov 23 – Dec 6.”

Looks like Don Wildman’s new show, Dark Tales with Don Wildman, snuck up on us, too. (BTW: I’m a huge Wildman fan and I didn’t even see this one pop up, either!)

Most Terrifying with Jason Hawes Format

I watched episode 2, “Ride To Hell,” for this review.

Most Terrifying with Jason Hawes follows a very similar format to many other re-enactment shows. A host, Jason Hawes, gives some background on a haunted place and introduces the first of 3 segments. We jump to the eyewitness interviews and see some re-enactments of the paranormal activity. From time-to-time, Jason gives some narration to fill in the blanks. Then, it’s back to Jason in a library to finish the segment and prep the next one.

We’ve seen this format used for many shows including:

The show goes around the world to bring you different haunts. It’s jumped from the USA to England. Variety is the spice of life, eh?

It’s always a good thing to see Jason talking about paranormal investigations, but this one isn’t about investigation. It’s about personal encounters, witness reports and dark history from the locals.

I’ve got a few quibbles with the show. First, it’s kinda misleading. When you read the episode descriptions, it sounds like Jason is on-site and interviewing witnesses and locals. He’s not. He’s actually in a library and reading off a script.

Next, the production seems rushed. The re-enactments don’t have the best SFX. Sometimes the sound is a bit muddy. It makes me think the segments weren’t recorded for this show, but something else. Perhaps it’s just the budget limitations, so it’s not as polished as other shows. I mean, it’s tough to go up against Believers in production quality.

Jason also seemed a bit stiff when presenting, like he wasn’t really comfortable. I think this is his first time as a host/MC/presenter and that could be part of it. He just seemed tentative about his lines.

The other thing that bugs me isn’t this show directly, it’s the format. This format is getting tired. I mean, how many interview/re-enactment shows can you have?

When I described the show to my besties (all fans of Ghost Hunters/Ghost Nation and other paranormal programming), they couldn’t tell it apart from the others listed earlier. Really, they had to ask “How’s this different from other ‘most haunted…’ shows?” I was like, it has Jason in it. They just gave me a collective shrug and went back to watching Believers on demand.

As you can tell, the crew and I really like Believers. It’s probably not fair to compare Most Terrifying… against Believers, but it has some of the best re-enactments and storytelling on paranormal TV. All shows in this format should aspire to that level.

Should You Watch “Most Terrifying with Jason Hawes”?

Most Terrifying with Jason Hawes isn’t as awful as I may have made it seem. It’s just not unique enough to stand out from the format’s many other similar shows. I mean, if you have Jason Hawes from Ghost Hunters fame, you really have to plus it up from production, re-enactments, jump scares and other fun, spooky stuff. And this show didn’t really do that for me.

If you’re a Jason Hawes fan, sure, you’ll get your fix. For others, you’ve seen it all before. If there’s an episode marathon playing, I’d leave it on in the background, but I’d rather watch Ghost Nation instead. It’s a pass.

4 thoughts on “Most Terrifying with Jason Hawes TV Show Review”