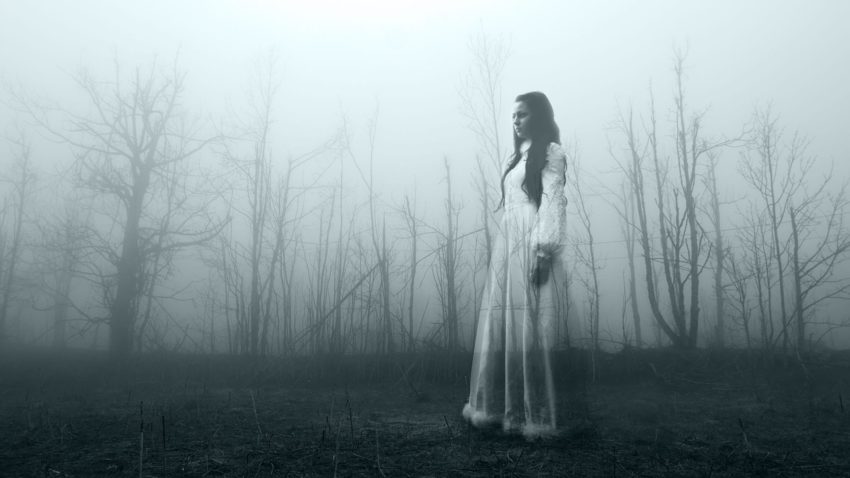 Mire ghosts are trapped between life and death. Their bodies froze to death in a swamp or bog, their souls held on. Now, they look for someone to comfort them in Limbo.

There’s no definitive source for the mire ghost stories. Americans probably picked up the tales from British colonists. These spirits have been mentioned as warnings to travelers for at least 400 years, if not more.

A traveler takes a short cut by crossing a swamp, marsh or bog. It’s late fall or winter, and they get stuck in the mud and slowly freeze to death during a foggy night.

Some say the water holds on to the spirit. Others say the person died without prayers to send them to the afterlife. In some cases, the person used the swamp as a place to commit suicide.

Whatever happens, the soul gets stuck on our world and doesn’t move on. Over time, the ghost seeks companionship and looks for someone who travels alone and craves somebody to care for them. When that living person finds themselves in the bog, the ghost strikes.

Conditions have to be just right for a mire ghost to appear. First, you need to travel to a bog or swamp. Second, it has to be cold enough for someone to freeze to death. Third, someone has to be lost and looking for companionship. For freezing to happen, you just need to be wet and the temperature to be in the 40s. Wet skin loses heat fast.

However, that’s a lot of random situations for the modern age.

Back in the day, it was more common for people to get lost while traveling through this kind of terrain. Since it would take days to walk or ride a horse somewhere, it would make sense for you to get stuck in a swamp along the way.

Anyway, the ghost could appear day or night. It’s not picky about who to target. You meet the conditions, the ghost manifests. Speaking of which …

When a mire ghost manifests, a thick fog forms over swampy land or a bog. It rolls toward you, engulfing you. This isn’t your regular fog: You can feel its chill fill your lungs as you breathe. It’s smothering you. Foggy tendrils curl around you like a corpse’s embrace and holds you down.

Then you hear the voice.

It’s desperate, soft and scared. The voice sounds far away, but with every phrase, it gets closer, stronger and more vibrant.

Through the fog, you’ll see the shape take form. It wears tattered, wet clothes. Its eyes are red, swollen and with tears pooling up.

If you’re as desperate as the ghost was at death, it will ask you a single question: Will you stay with me?

If you say ‘yes,’ then it will lose its shape into the foggy mist, flood your lungs, and kill you. Your soul joining with the ghost in Limbo, waiting for the next lost, lonely traveller.

How To Clear Mire Ghosts

Now, this is going to be tough for most folks. There are 2 ways to banish a mire ghost:

In these two cases, the ghost will be wiped from our physical world. It may move fully into Limbo, without a way to interact with people. The heat may be the trigger that opens the doorway for the ghost to move on. We don’t know.

But how would you keep the bonfire burning or the nail hot enough on a cold, foggy night?

I think prevention is the best medicine in this case. No swamps or bogs on cold nights for me.