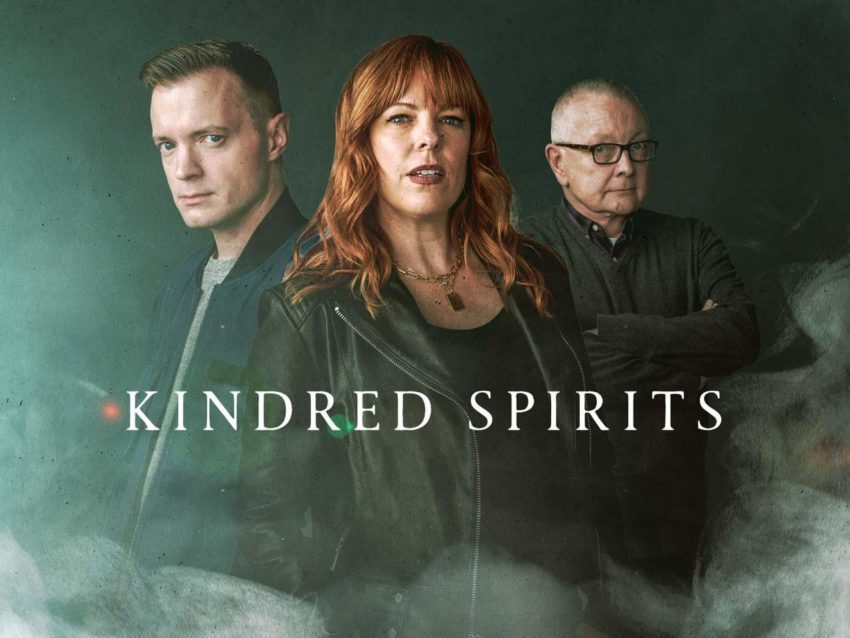 On December 18th, Kindred Spirits returned on both Travel Channel and Discovery+. Amy and Adam investigate a former Masonic hall and find something in the basement. Get the scoop after the jump.

I’m so excited Kindred Spirits is back. Amy Bruni and Adam Berry have appeared on other paranormal shows, like Ghost Nation & Ghost Hunters Halloween special, during their hiatus. Amy even had a Top 25 podcast in 2021 (Haunted Road with Amy Bruni). Now, it’s time to get back into their show. A sixth season! That’s a long run for a reality ghost hunting show.

My criteria is filtered through a real-life ghost hunter’s perspective, first and foremost. I don’t forget people watch for the whodunnit and entertainment value. Here’s what I look for in a ghosty show:

Amy and Adam kick things off by investigating a 130-year-old Masonic lodge that was also a mortuary. Today, it’s an antique shop in East Bridgewater, Massachusetts. Lorrie Parker currently owns it. She’s had some encounters with spirits in the building for 13 years.

Activity deals with phantom scents and some violent shoving. With all those antiques and a funeral parlor in the back, I can see why some ghosts could be pissy.

Shawn Robichaud, a Mason, stops by to help Amy and Adam get some cred with phantom Freemasons. The production didn’t record any rituals Shawn performed. Freemasons like to keep their secrets … well … secret.

The Masons are set up to be the aggressive spirits, but there’s a twist that changes the team’s perspective. And it’s a doozy.

So, you may ask, “Where’s Chip?” the team psychic-medium. He appears remotely and makes a connection to a very grumpy spirit with a potty mouth. Later on, he sends a cryptic text to Amy, which validates the twist. I will say, the preview made his connection seem more hyperbolic than within the context of the episode.

Kindred Spirits wouldn’t be Kindred Spirits without Amy getting some historic research in. She talks to a local historian, Wayne Nye, about the former undertaker. Things take a turn once these details come out.

The Surprise in the Basement

A spirit box session and Chip’s psychic sleuthing led to a pivot during the investigation. Based on the clues, Amy and Adam had a cadaver dog search the basement. Eisen, the dog, got something in the back of the basement. Next, the team had a ground-penetrating radar check the same area, and an anomaly was found.

Amy didn’t leave us hanging. She dropped some pictures of the police arriving, but the crew couldn’t film them. It was a (possible) crime scene, after all. Check her posts below for more scoop:

First, I love the lanterns they use. My BFF (Sandy) and I watch this show with lanterns on in a dark room. It looks like they got bigger this season. I’ll have to hunt down the new versions because I’m a total nerd.

Amy and Adam stuck to ghost box sessions, specifically the Estes Method, and EVP sessions to gather a lot of evidence. I do have some quibbles. Mainly, I didn’t hear what Amy and Adam heard. Most of the EVPs sounded like distorted burps. I close my eyes so I don’t read the labels on the screen. That helps prevent my brain from taking the suggestion and then hearing the words. I wouldn’t present the EVPs collected in the funeral parlor. They just weren’t clear enough.

In the basement, the Estes Method was used to get clues from the dead. It’s hard for me to say much because I didn’t hear the radio frequencies. Ghostly Activities has tested this method quite extensively, and we stopped using it. But Amy and Adam got more clues to figure out the basement surprise. This, with Chip’s text, had the team pivot to finding a (possible) body. It seemed a little too easy to pull the clues together so quickly. Perhaps the editing didn’t showcase all the research and experiments?

My favorite experiment involved using death certificates as trigger objects. To support the effort, Amy and Adam returned the funeral parlor ot its past glory. I’d do this exact thing, but I’d skip the KII meters and use a Mel Meter or REM pod instead.

I don’t have many complaints. If you don’t notice the technical aspects, then there’s not much to change. The editing moved the episode along. The name cards and equipment labels looked good and didn’t stay long. Lighting was spot on for each part of the investigation. The audio worked out fine-and-dandy. The only quibble I have: Some scenes had this weird, vaseline-smeared quality for the darkest rooms. I’m not sure what would cause that unless it was a vignette overlay of some kind. Anyway, it distracted me and took me out of the moment.

Also, I’m glad the producers didn’t interject themselves into the episode. That’s one of my big pet peeves. I don’t watch a show for producers to visibly or audibly direct the show. Thank goodness that Kindred Spirits avoids it.

Kindred Spirits doesn’t use the latest-and-greatest ghost tech, but they use the gear that works best for them. Personally, I never touch a spirit box. Amy and Adam did get some juicy, spectral evidence for this case using it. That and Chip’s input led to the cadaver-dog discovery in the basement. That was some compelling ghostly TV right there.

The chemistry between the two paranormal BFFs is obvious, and they’re so respectful of the haunt and their clients. It oozes likeability.

Really, the only thing that irked me was some footage in really dark rooms (like the funeral parlor and basement EVP sessions). It looked like vaseline got smeared along the edges of the frame. If you notice it, it distracts from the presentation. It’s not a dealbreaker, but it’s something to improve.

This is my favorite reality ghost-hunting show. It feels real unlike that hyperbolic, jump-scare crazy show that’s been on the air for 25 seasons. Kindred Spirits feels real. And that’s what reality TV shows are supposed to do.