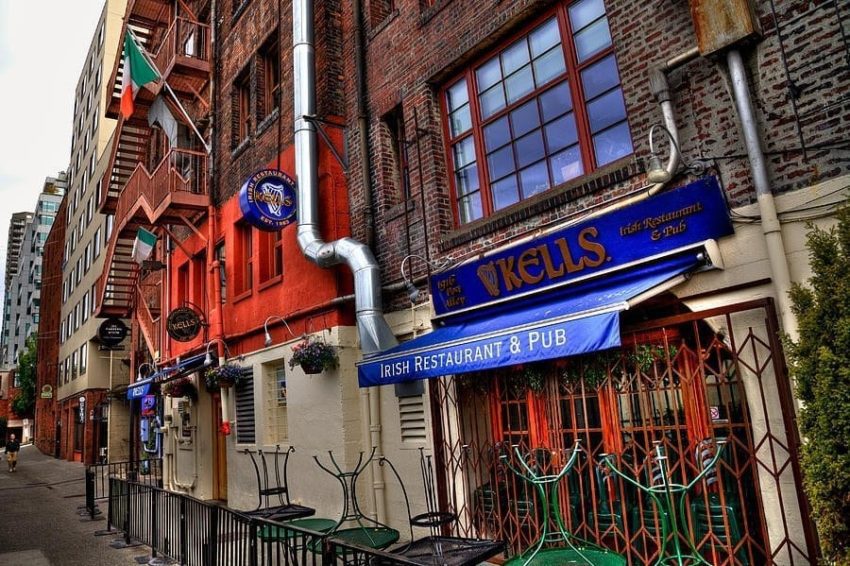 Kell’s Pub, in Pike Place Market, has a long history of ghostly activities. Some even call it the most haunted bar in America. Find out about its ghosts and haunting activity after the jump.

It doesn’t get better than this: Kell’s Pub is in the Butterworth Building, a mortuary. The entire building was used to store the dead. Kell’s Pub was an entrance for delivering bodies. Workers would put the bodies into an elevator and take them to the third floor to process them for burial.

Nowadays, Kell’s Pub is one of the most celebratory spots in Seattle. It’s known for its life-affirming good times, like live bands and great drinks. Ghosts have a tendency to latch on to the good vibes it gives off. After all, you have all these young people living life to its fullest: A ghost or three would love to soak in some of that positive energy.

There are two ghosts that regularly manifest at Kell’s. The first is a little girl with long red hair. She’s known to play pranks on the guests, but really she wants to play with other kids. During the day, you can have children in the pub, so that’s when she’s most active. This ghost girl can manipulate physical things and has made toys for children, like rag dolls, who visit the bar. No one knows the girl’s identity: She may have been one of the many children who died in the 1918 influenza outbreak. This ghost girl doesn’t mean to harm anyone, so have some fun with her, if she manifests near you.

The second ghost is named Charlie. He manifests in the Guinness mirror, then disappears. Charlie does it quite often on nights when a band plays. You’ll know it’s him because he’s an older gentleman wearing a derby hat. Again, this is a happy spirit soaking in the good vibes provided by Kell’s liveliness. Don’t worry about him giving you a scare.

There could be more ghosts lingering at Kell’s Pub due to its past, but these two spirits are the most well-known and consistent hauntings. You could find more during your investigation.

First, let’s watch this news snippet on Kell’s from KOMO:

There have been apparitions captured at Kell’s Pub as well as Class A EVP. You probably won’t be able to run a ghost hunt in the pub, but you could get access to the hallways of the Butterworth Building. Everyone knows about the bar’s haunted reputation. Go ahead and bring an infrared camera and your digital recorder. This place is as good as it gets for ghostly evidence collection. EVP may be difficult because the bar has a lot of visitors.

One thought on “Kell’s Pub | Seattle’s Most Haunted Bar”