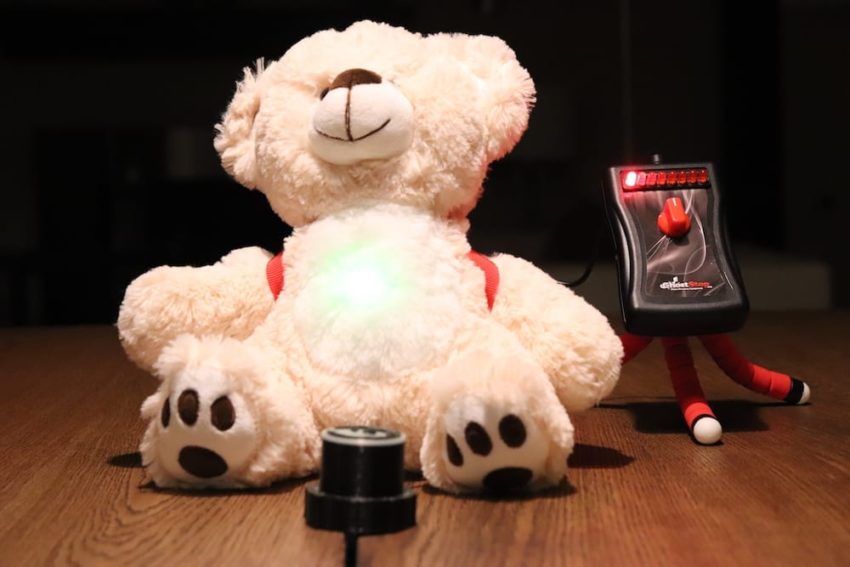 We’ve had a lot of success with Boo Buddies over the years. It’s an engagement/trigger object that spirits just love to play with. Get my ghost hunting tips after the jump.

Ghost Stop developed the Boo Buddy, around 2010, to assist with engagement sessions on ghost hunts. The first version, now called the Boo Buddy Jr., only detected EMF changes. It got an update in December 2018.

The version I use is the Boo Buddy Interactive. Ghost Stop released it in 2014, but I bought mine about 2 years ago, and it’s one of my favorite gadgets.

This bear can detect:

When it does, it will tell you with one of 40 voice responses. For example, if it detects touch, it will say, “That tickles.” It uses glowing red paws to show a change in EMF, and it will say it’s warm or chilly if the temperature changes.

The voice responses can be used for EVP sessions as well. If the Boo Buddy doesn’t detect environmental changes, it will ask random questions for EVP, like “what’s your name?” There’s an app you can download from Apple Store to use with a Boo Buddy Jr.

I routinely setup remote experiments, which I record to video, and investigate other places in a haunt.

How To Set Up An Experiment

I used the Boo Buddy Interactive quite a bit. My favorite setup (detailed in the video above) involves placing the Boo Buddy in an open area and setting up other measurement and recording equipment.

Specifically, I use an EDI+ to record precise environmental changes around the bear. Boo Buddy will tell you it detected the earlier mentioned conditions, but it can’t tell you degrees or milliGauss. You need something else with those features.

The Boo Buddy may ask questions, but it doesn’t record EVP responses. You have to put an audio recorder near it or hope you video camera has a sensitive microphone to pick them up. I use a Zoom H1n and a Rode Video Mic Pro+ on my camcorder as the fix. The H1n will do better with EVP collection.

Lastly, I put a camcorder on the bear. To show the best evidence, you put the EDI+ in frame with the gadget. If Boo Buddy says it detected a change in temperature, then the EDI+ will flash blue or red to confirm it. If EMF spikes, then you’ll get both paws flashing red and a blue spike on the EDI+. As for the camera, I shoot in normal light or full-spectrum light: Infrared tends to wash out the green and red colors on the Boo Buddy.

Used in conjunction, the Boo Buddy, EDI+ and audio recorder will provide excellent data collection of your ghost hunt.

Like all ghost hunting gadgets, there are some tips-and-tricks to know:

@Readers: How do you use your Boo Buddies on ghost hunts? Do we have similar methods? Leave a comment below.