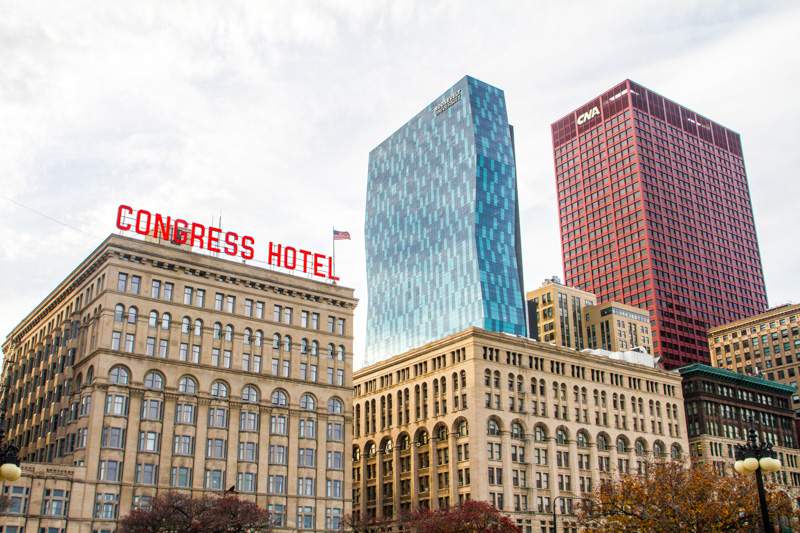 Roosevelt University bought the Auditorium Building in 1946. It also inherited the building’s very active ghosts. Find out why it’s so haunted and where to find the ghosts.

Roosevelt University took over the Auditorium Building in 1946. It’s now considered the main campus, but Roosevelt has locations in Schaumburg, IL and another building at 18 S. Michigan Ave., the Gage Building.

So, none of that really means Roosevelt University is haunted. What else could lead to so many ghosts?

There’s probably 2 reasons for that: The Great Chicago Fire of 1871 and Native Americans.

Right outside the main doors lies Michigan Avenue, a major roadway in downtown Chicago. Lake Michigan used to reach this street, but that changed after the fire. The city pushed the smoldering rubble into the lake. That’s what made most of the land for Grant Park, which is directly across the street from Roosevelt University, as well as Streeterville to the north. Essentially, the Auditorium Building was built next to a graveyard. There’s bound to be a few spirits that will haunt their old neighborhood.

Then there’s the curious case of a Native American battle with the US military near the location. The Battle of Fort Dearborn occurred in 1812, long before the building was thought of. More than 400 Potawatomi warriors attacked the fort and its regiment of 67 US soldiers. The battle lasted only 15 minutes. The Potawatomi tribe successfully captured the fort, but they lost 15 warriors. The US military lost 38 soldiers and 14 civilians. A little bloodshed in a swampy convergence of the Chicago River and Lake Michigan can imbue the ground with some ghostly essence, eh?

Most of the other ghosts you’ll read about probably deal with past performers. The Auditorium Theatre, facing the Congress Hotel, is known worldwide for being acoustically perfect. Many famous performers have played there and—just maybe— left a bit of themselves behind.

Most of the hauntings happen in the Auditorium Theatre. Many witnesses recalled seeing phantoms sitting in the seats, but vanished when approached. In other cases, you can still hear the roar of applause from an approving audience, but the theatre is empty. The same goes with laughter and the low buzz of chit-chat. Witnesses have also seen shadow people roaming the lonely aisles at night.

There is a ghost that seems to love a dramatic entrance: It jumps from the catwalk, 40-feet above the stage, and vanishes right before it hits the floor.

But, it’s the Auditorium Building, which now houses Roosevelt University, that has the really fun ghostly activities.

Poltergeist-like activity has happened at the Academic Success Center at the south end of the Michigan Avenue lobby. Office workers have had their water bottles and coffee mugs thrown off their desks by an unseen hand.

In the basement on the Congress Parkway side, guards have seen lockers slam shut and heard running down empty hallways.

Most of the activity happens on the upper floors. Starting on the 8th floor and going up to the 10th and 11th floor libraries, witnesses have seen apparitions of maids and violinists, and seen objects move on their own. Reportedly, Rooms 902-908 have a lot of ghostly activity.

Activity seems to happen between 10 PM and 5 AM, so you may need permission to run a ghost hunt during these hours.

It sounds like most of the ghosts are residual hauntings, which are benign. You don’t have to be scared of these phantoms….unless it’s that crazy poltergeist in the Academic Success Center!

It’s also interesting that the ghosts seem to manifest overnight, but not much happens during the day. Intelligent hauntings would be active all day and night. The quiet of night could act as a trigger for the residual ghosts to manifest.

We really like that so many ghosts manifest! Apparitions are the most common activity. EVPs are nice and all, but seeing ghosts is even better!

Okay, the Auditorium Building has all the attributes of a classic, and safe, haunting. You only need a few items to capture the evidence. Bring this equipment along:

5 thoughts on “The Haunted Halls of Roosevelt University in Chicago”