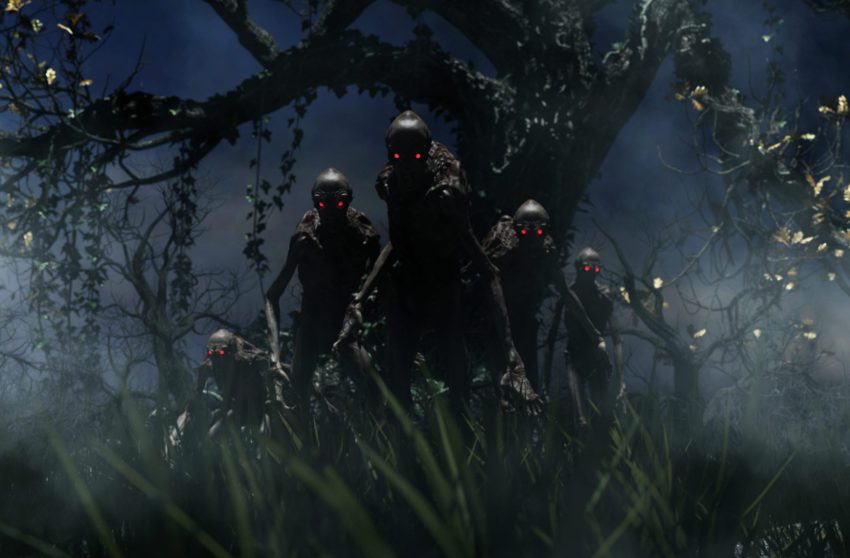 There’s something evil in those woods. Find out what causes forests to become haunted, what to expect, and how to protect yourself from their ghostly manifestations.

History is the best way to find what may cause the woods to become haunted.

These events are most likely to create a haunting:

Besides Native American burial grounds, it could be a cemetery or family graveyard. Usually, it’s not a problem unless you’re disrespectful, vandalize or take something. Then things get messy.

Killing someone, as we all know, can lead to a haunting in short order. But a forest needs more than just one murder to do the trick. It takes a series of murders over a few years. A single murder may lead to a haunted hot spot: A series of them, with bodies dumped around the woods or in a lake, will create a haunting large enough to overtake the forest.

Most people will think about fires, floods, tornadoes or earthquakes when they hear ‘natural disaster.’ I’m really talking about drought and famine. These disasters slowly grow; impact villages and towns; and generate suffering that imbues the land with negative energy.

Bloody fights can imbue the land really fast. The pain and suffering battles create corrupt it. Usually, battles lead to residual hauntings versus an intelligent haunting. But you never know if someone wants to continue the fight in their afterlife.

I really hate black magic, hexes and curses. It’s so evil to cast on someone or something for such a long time. In most cases, it’s someone who wants revenge for a wrong-doing. For a forest to get haunted, it requires a sacrifice. As in blood sacrifice. Griffith Park in Los Angeles has one of the more notorious curses. It can take generations for the curse or ritual to dissipate.

Little People don’t like their homes bothered. Hikers and campers are notorious for disturbing things they shouldn’t handle, or mistakenly chopping down a tree for a camp fire. If a fairy decides you’re a threat, it will not stop until the threat ends, which usually involves someone dying.

When you research the forest, look for other causes for death. Less common events can create a haunting, too. Those would be suicides, getting lost and dying of exposure, animal attack, and other natural deaths. But … one death won’t do the trick. You need a series of them to charge the area, and that takes a lot of death to accomplish. Look for the patterns (time, place, cause of death) to determine if those backyard woods may hide something you don’t want to mess with.

Clues You’re in a Haunted Forest

Most state parks and national forests won’t have clear indicators: They’ve been so well-maintained–and have restrictions on visitor access–you’d never see them.

That is until you leave the paths, trails and camp sites.

Haunted forests will let you know it’s not safe, if you look for signs. The most common indicators you’re in a haunted forest include:

This is more than just a fog. A preternatural mist can smother, blind and freeze you. You may see shadow figures in them. They also hug the ground, unlike a traditional fog that seems to hug tree tops.

Spider colonies are the massive web sacks and interwoven mesh these arachnids build. It’s not a single tree: The colony covers a swath of trees, bushes and grassland. This may also indicate a vortex, verge or portal may be present.

A dead zone is an area where all plant and animal life has died … apparently. In a haunted forest, it’s still alive, but feeds on negative emotions like fear, despair and hopelessness. Dead zones also indicate a verge or portal may be present. The thin membrane between our world and the Otherside causes the appearance of death and decay.

Other Than Blue Or Clear Water:

If you find a creek, stream, river, pond or lake with anything that doesn’t have clear, bluish or muddy water, then you may have found something sinister. That’s especially the case if the water is red or black. Now, check to see if there’s high concentrations of elements in the area. It can change the water’s color. You wouldn’t see a black water creek for example. It’s either pollution or evil.

If you don’t hear birds, a breeze, your own footsteps … you need to skedaddle ASAP. When the forest suppresses any sound, ghostly activity is about start in a big way. That usually means the illusions listed earlier.

Some forests don’t have these signs; those with residual hauntings. With them, everything seems normal until the haunting manifests. There’s no way to tell these woods are haunted unless you have witness accounts. Starved Rock State Park in Illinois is an example. Luckily, a residual haunting is harmless unless you get so freaked out, you hurt yourself.

The ghostly activity you find is a bit different from a haunted house or other haunted place. Forests’ activity is all-encompassing.

The most dangerous kind of phenomena is illusions. When it manifests, you start to hear, see, and feel what the forest wants. It’s all to lure you deeper in to the woods and get lost, and it will be very personal to you. Then, you could fall prey to other dangers like animal attacks, death by exposure or other ‘natural’ causes. Plus, the isolation enhances your fear, despair and hopelessness. All of which feeds the woods.

That’s a good reason to never leave a trail or camp site.

As for other activity, the most common manifestations include:

In a nutshell, a forest needs to absorb your negative emotions to thrive, much like other dark entities. Still, the plants needs physical nourishment, which means you need to bleed or die to help fertilize them.

Unfortunately, most protective techniques don’t work. That may happen because the area is so vast; the curse too strong; or, the Little People are having none of it.

A few things have worked. This is what you can try, but no guarantees. Each haunting is a unique case and may require a custom protective solution.

Often, people can just say they mean no harm and want to take in the natural setting. If you have good intentions, most haunted forests will leave you alone. Only the darkest, most sinister woods would try to scare and feast on you. Those forests are rare.

Jet is similar to coal. If you get attacked, you can burn it and the smoke will keep the evil forces at bay. That should give you enough time to skedaddle.

I’m not sure what it is about copper, but it can deflect nearly anything the woods throws at you. It creates a barrier to stop the illusions that are the most dangerous manifestation. The amulet should reflect your faith, so a Buddhist could use the Eight Fold Path wheel.

This herb is one of the most powerful protection plants. When burned, it clears the most evil spirits and energy, but it can also nullify other protective herbs and amulets. Motherwort also boosts your own natural defenses to paranormal entities.

Jake’s Rambling: I think the main reason most protective techniques don’t work is because you voluntarily entered the forest. That gives the spirits full access to you, too. I mean, you’re standing on haunted ground, after all.

Still, you can get 2 malevolent spirits to manifest in the forest, and it usually doesn’t end well for you: