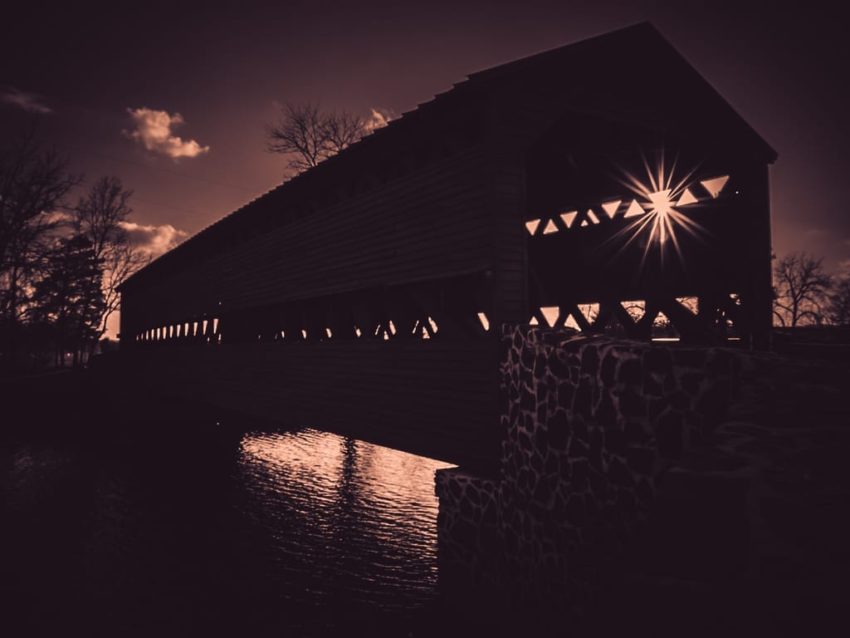 Haunted bridges provide excellent evidence for ghosts and spirits. But, the environment and logistics of a ghost hunt on a bridge can get a little tricky. Get some tips after the jump.

If you do your research, you should be able to find why a bridge is haunted. Bridges have very direct reasons for their hauntings. Some of them include:

Suicides are the most common reason. Now, this will depend on the location, but many people have jumped to their deaths from the highest bridges. These desperate, sad people climb over the gates and leap to a quick death. It leaves a powerful imprint on the bridge. If the bridge crosses over a ravine or valley, then victims’ bodies leave an extra charge to the area. With a river crossing, many of the victims are washed away, but the imprint remains. You’re probably familiar with the Golden Gate Bridge, Colorado Street Bridge (a.k.a., Suicide Bridge in Pasadena, CA), and Aurora Bridge in Seattle. All three are 100-feet or higher, and have the highest rates of suicide on the West Coast.

Vehicle accidents is another reason for bridge hauntings. The most common accident types include a driver crossing a lane and hitting a passing car; or the driver losing control and going off the bridge. For train accidents, there’s either a derailment; collapse of the structure; or the train strikes someone crossing the trestle. Even boats have been known to collide with the bridge’s support structure. In every case, one or more people died in the accident. This sudden event imbues the bridge with their energy and fixes their spirit to the bridge and its immediate area.

People used bridges for hangings and lynchings, especially during the Civil War and Wild West days. Angry mobs would grab anyone in jail, or thought to be guilty of a heinous crime, and throw them over with a rope tied around their necks. Bigots would grab African-Americans for the slightest reason and use their deaths as an intimidation tactic for others in the area. In the Wild West, land barons and corrupt police used hangings as a way to knock off rivals and take their land. Many innocent people died this way. It builds a need for vengeance, a powerful emotion, and charges the bridge with ghostly energy.

A flood, which destroys the bridge, can also imbue the land with energy. In a flash flood, people would go the bridge, thinking it’s sturdy and can manage the torrent. But, the ground underneath gets washed away and the bridge crumbles into the river. It would take everyone on it to their deaths. When the bridge is rebuilt, the haunting begins.

Types Of Ghosts Found On Bridges

Residual hauntings happen most often on bridges. The haunting plays out like a scene from a movie. You may see someone jump over the edge. On a trestle, you may hear a train approach, but never does. The residual haunting may give you clues to the person or event, so pay attention. You might be able to solve a case.

Intelligent hauntings don’t happen as often as their residual counterparts. For bridges, you may find a phantom manifest to warn you about an approaching car you didn’t see. It may also lead you to a structural weakness in the bridge. In other cases, you may see floating lights that follow you.

Bridges and their ghosts are a curious lot: For some reason, the spirits are bound to the bridge and its immediate vicinity. It may deal with the event that imbued their energy to the area. But, hauntings on a bridge stay on the bridge. They can’t attach to you.

Most bridges cross a river with a powerful current. Many paranormal researchers believe that water stores an energy imprint in the area. The water also generates a field that can create a ghost portal. These portals can open and let entities into our physical world to create a haunting. There’s usually another element, like time or other environmental conditions, to open them. They can act like a keyed verge.

I’ll be direct: It’s not safe to run an investigation on most bridges. If you’re in a city, then traffic will whizz by and the drivers won’t care about your safety. Out in the countryside, many of the haunted bridges are closed because of disrepair. You can’t always go under them because there’s water or a deep ravine. As for covered bridges, some have an outboard sidewalk, some don’t. Pick one with the walkway. And don’t even bother with a trestle. There’s nowhere to go when the train comes by.

But some big bridges do have areas for pedestrians to cross. If you go to the Golden Gate Bridge, Colorado Street Bridge and Aurora Bridge, they have dedicated paths for you. Don’t expect that to be the case with every bridge.

Now for another logistical snag: Bridges are not very good for evidence collection, but you can do it. I never said you actually had to cross the bridge to ghost hunt. You can run an investigation just before the bridge. It’s safer, too.

Here’s what you can do:

Haunted bridges are notorious for their apparitions, so visual equipment is the way to go. Notice I didn’t mention audio recorders. It’s difficult to get good EVP on a haunted bridge. There’s a lot of sound pollution in cities and the traffic will cancel out anything you might record. If you go to the countryside, things will be better, but it’s an uncontrolled environment. That means you may pick up critters and people talking from afar.

I also recommend ghost hunting at night. The number of people and traffic would quiet down, so you may have a better chance at collecting evidence.