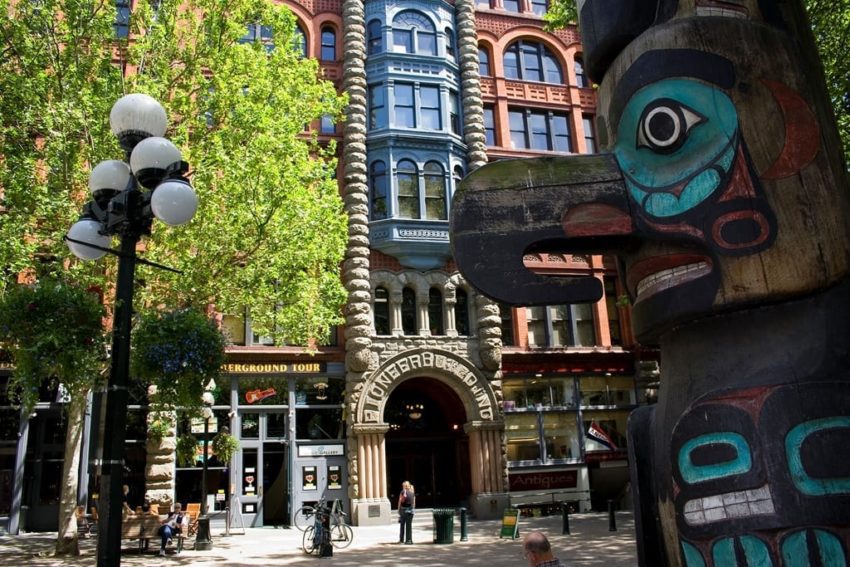 Pioneer Square is full of ghosts. There are 28 known haunts within the 15-or-so blocks of the area. It helps that a fire, crooked cops and robbers all contributed to create the haunted place it is today.

How Pioneer Square Got So Haunted

Well, a lot of it has to do with all the suffering that happened between 1850 and 1935. Since its beginnings in the 1850s, Pioneer Square attracted a rough crowd. You’d have scallywags and hooligans getting drunk, robbing people, and shooting a few of their innocent victims in the streets. It was the part of Wild West, after all.

Pioneer Square also had a large homeless population. People scrambled to get food and find shelter from the freezing rains of the Pacific Northwest. Back then, most regular citizens turned a cold shoulder and roughed up the homeless. It was common to find bodies in alleyways, left to rot without a proper burial. That long-term suffering leaves a big negative imprint on an area.

Corruption was another factor. Seattle has a very long history of morally bankrupt police chiefs. There have been a few bloody feuds between bad cops and equally corrupt businessmen fighting for control of Pioneer Square. There had been no less than 20 shootouts between cops and business owners between 1890 and 1902. Usually, both parties died in these battles.

In my humble opinion, the most significant cause for hauntings is the random acts of justice by the locals. In these cases, random acts of justice means hanging innocent men in the middle of Pioneer Square Park. It happened at least 3 times in 1882. Nothing makes a haunting like innocent people murdered by a mad mob without a fair trail.

Most people around town will say the Great Seattle Fire of 1889 created the ghosts. I have to disagree with that. No one died in the fire, except a million or so rats. In fact, it brought the city together and most of it was rebuilt within a few years. If anything, all that positive energy would release ghosts. No, the fire didn’t kill anybody, but the rebuilt sidewalks did.

Not every ghost is a notorious bank robber or crooked sheriff. Most of the ghosts are victims of robberies or hangings. It’s the innocent, who haunt pioneer square.

Here are a couple of ghosts you can meet on a ghost hunt:

Edward worked at the Scandinavian-American Bank in the underground. He would take miners’ gold and store it in the bank’s vault. During a robbery, Edward was shot and killed, along with a miner. Today, ghost hunters have reported Edward manifests by the vault. He has a handle-bar mustache, wears a white shirt with suspenders, and a big black top hat. Edward is one of the few apparitions you’ll meet. He’ll also answers a few questions before he vanishes.

In 1882, a mad mob hung a couple of robbers for murdering George Reynolds. Unfortunately, they didn’t stop with the 2 men and stormed the Seattle jail, where they found George Payne. The crowd pulled him from his cell and took him to Pioneer Square Park. Payne declared he had nothing to do with the robberies. The mob then hung him with the other 2 robbers. Today, you may see a shadowy figure hanging from a tree in the center of the park. Ghost hunters have captured EVP that says “I’m innocent. You killed an innocent man.”

What To Expect on a Ghost Hunt

There’s a lot that can happen on any given day or night in Pioneer Square. While there are few apparitions, you can capture a lot of ghostly voices and interactions.

The Seattle Underground is probably the best place to look for ghostly manifestations and apparitions (see Edward, The Bank Teller above). You can also capture a lot of EVP, like ghostly voices, shuffling feet, knocks, bangs and other unexplained sounds.

On the street level, you can capture residual hauntings. Ghost hunters and everyday people have seen the robberies from the 1880s play out on the street. They’ve seen shadowy figures and heard phantom gun fire echo down the empty streets.

Another common ghostly activity comes through interactions. For example, you could stay at the Pioneer Square Hotel. Many ghost hunters stay there just to experience the activity. Some have reported phantom dogs hopping into bed with them. TVs turn on by themselves. Chairs slide across the room. Psychics run from something evil in the basement. There’s even a ghost girl, who likes to comb ladies’ hair.

What’s nice about Pioneer Square is how amiable most of the ghosts are. You don’t find mean spirits here. Usually, they go about their business—day or night—looking for a little fun.

I recommend the following equipment for your ghost hunt:

“Spooked in Seattle: A Haunted Handbook” by Ross Allison