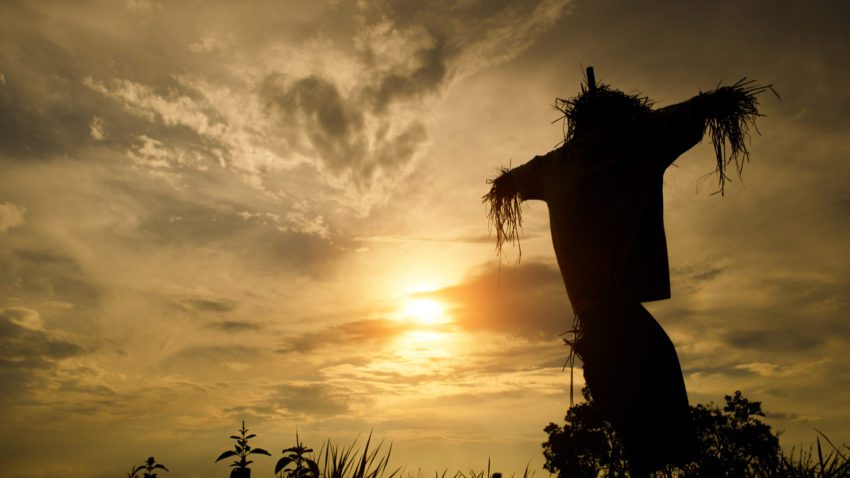 Scarecrows go back to the Viking days. These spirits mean to protect a town or plot of land, but that protective nature can lead to some dangerous situations. Learn why scarecrows haunt places and how to protect yourself after the jump.

What are scarecrow spirits?

Scarecrows go way back to Viking days. The farmers and villagers would put out a scarecrow to keep evil spirits from destroying crops, killing livestock and bringing disease to the town.

Sometimes, the scarecrow would become too protective because it would get possessed by nature spirits. Usually, these spirits would eliminate any threat to the plants and animals of the village. That means it would kill anything that seemed dangerous including people.

Other scarecrow spirits are linked to a protector from the town or farm. That means it could be a deceased farmer, a sheriff, fireman, mayor – you get the idea. In some cases, the spirit comes from a dog that protected the land.

What places do scarecrows haunt?

Scarecrows stick to rural settings, but that’s about it. Most of them have an anchor that keeps them bound to an area. Now, the area could be anything from a field, farmhouse, small country church, tree or thicket of brush.

Its historic haunting pattern will determine how much range it has. If you never see the scarecrow leave its field, then it’s bound to the soil. That may mean there’s a body in the field. In cases where it haunts an entire town, then it may be a former protector (mentioned earlier).

What do scarecrows want?

In general, protector spirits only want to keep the town and its residents safe from harm. They won’t harm anyone unless the victim is truly evil and wants to hurt people. In some cases, these scarecrows have appeared on country roads and caused people to drive into a ditch. It’s unintentional.

Nature spirits want to keep the land and its plants and animals safe from human harm. These scarecrows are much more difficult to handle because they don’t care if they hurt humans. Ideally, the best thing to do is stay clear of them and their haunting range. If you hear rumors about these guys, then don’t pollute, don’t say negative things about the area, and don’t say nasty things about the locals.

How do you clear scarecrow spirits?

You can remove them by destroying their anchors. That could be difficult because the anchor could be the land itself—a very tough task. Also, most of the clearing techniques require fire. You could easily burn down the entire town by doing that, so don’t even go there.

I think the best thing to do is bind the scarecrow spirit to its post. You can do that by securing it with iron nails, iron wire and salting the soil directly below it. You will need to check the nails, wire and re-salt throughout the year.

One thought on “Ghostly Types: Scarecrows”