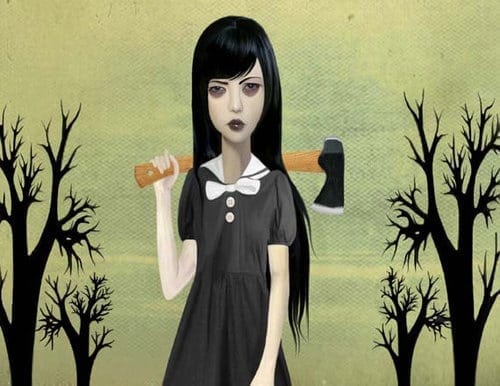 You know her: You love her. This axe-wielding, psycho bitch has inspired plenty of horror movies and nightmares. She also really lived and breathed, unlike the Bloody Mary urban legend.

Lizzie grew up in Massachusetts in the late 1800s. She was the daughter of a well-respected banker, Andrew Borden. Her mother died when she was three years-old. Lizzie also had a sister, Emma.

A few years later, her father met Abigail and things went to hell.

Abigail was a raging bitch herself. She didn’t like the Borden girls and often severely punished the girls for the slightest offense. Their father wasn’t much better. He was a tightwad that made them eat rancid meat and spoiled food. He, too, punished them for the smallest of reasons. Andrew wasn’t a good guy, either. He made his fortune by foreclosing on Civil War-era widows and selling the property to rich farmers and land developers.

On Aug. 4, 1892, Andrew and Abigail were slaughtered in broad daylight.

Above: Abigail’s body. The back of her head was cracked open by multiple axe blows.

Above: Andrew died from a dozen axe blows to his face.

At first, Lizzie and Emma weren’t the prime suspects. A Portuguese farm worker was questioned and released when the police couldn’t find any evidence to link him to the murders. The girls became the focus after this. The motive for the crime was money.

You see, Massachusetts law stated the wife, not the children, was the heir to the Andrew Borden’s estate. Abigail had no intention of sharing it with the girls and she made it known to them.

In a curious turn of events, the judge threw out most of the evidence against Lizzie. Witnesses said she tried to buy poison and burned a dress arond the time of the murders. As a result, the jury found her not guilty because of a lack of evidence.

Lizzie and Emma moved out of town after the trial. Eventually, Emma went to New Hampshire and changed her name to Smith. Lizzie died in 1927. She and her sister are buried next to their father in Fall River’s Oak Grove Cemetery.

The house is now a bed-and-breakfast and anyone can stay there. Ghostly activities are most common in the maid’s room. Items move and cold spots are common. Sometimes, you get poked or hear sobbing in the room.

Many people have reported shadow people and apparitions throughout the property. It even happens during the day. In the parlor, where Andrew died, and in Abigail’s room, doors open and shut by themselves. In the kitchen, coffee pots are known to mysteriously fall off the counter and shatter on the floor.

Trivia: Lizzie didn’t use 40 whacks to do the job. It was less than 20 combined whacks.