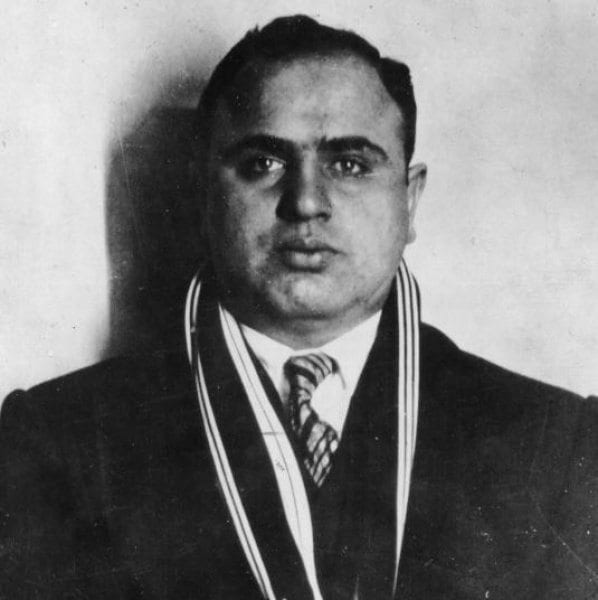 Al Capone is still with us. His physical body may have died, but his ghost haunts Chicago. In life, he was tormented by his own doings. In death, he visits 3 locations across the United States.

Capone’s Time in Prison and Death

I won’t bore you with the details of Capone’s mob past. It’s better to talk about his experience with ghosts and his own spirit.

The Feds jailed Capone twice in life – never for his mob hits. First, they sent him to Eastern State Penitentiary in Philadelphia for carrying a concealed weapon. Next, the Feds arrested him for income tax evasion and he went to Alcatraz.

At Alcatraz, he suffered the same abuse as all its inmates did. He was beaten and humiliated by guards and other prisoners. Capone kept to himself while at Alcatraz and he would spend days locked in his tiny cell, playing a banjo.

In 1939, he was released from Alcatraz and went to Baltimore to undergo treatment for a brain disorder. He never recovered and moved to Miami where he died after suffering a stroke and coming down with pneumonia.

Capone is buried at Mount Carmel Cemetery in Hillside, Illinois.

Capone and His Ghostly Encounters

Capone’s victims haunted him in life. While imprisoned in Philadelphia, he was visited by the ghost of James Clark, a St. Valentine’s Day massacre victim. Capone was known to beg Clark for his life and forgiveness from his cell at Eastern State Penitentiary. After his release, Clark’s ghost followed him back to Chicago. His bodyguards often reported the sounds of a fight in Capone’s bedroom. They’d break in only to find the room in disarray and Capone by himself. There are also reports on a tall man, potentially James Clark, appearing by the windows in Capone’s bedroom. The tall man would disappear when noticed. Capone used a medium, Alice Britt, to remove the spirit, but it failed. Clark’s spirit haunted Capone for the rest of his life.

Capone is thought to haunt 3 locations: Eastern State Penitentiary; Alcatraz; and, the Congress Plaza Hotel. At Eastern State Penitentiary, his old cell has had many orbs photographed and Class A EVP. His presence is stronger at Alcatraz. Reportedly, you can hear his banjo played from his old cell in Cell Block D. You can also capture Class A EVP near the “hole,” a form of solitary confinement, in the same cell block. At the Congress Plaza Hotel, Capone haunts Suite 800 in the north tower. However, his ghost isn’t as strong as the other 2 locations. You may see an orb, capture a Class B or C EVP, unexplained knocks, and/or cigar smoke.