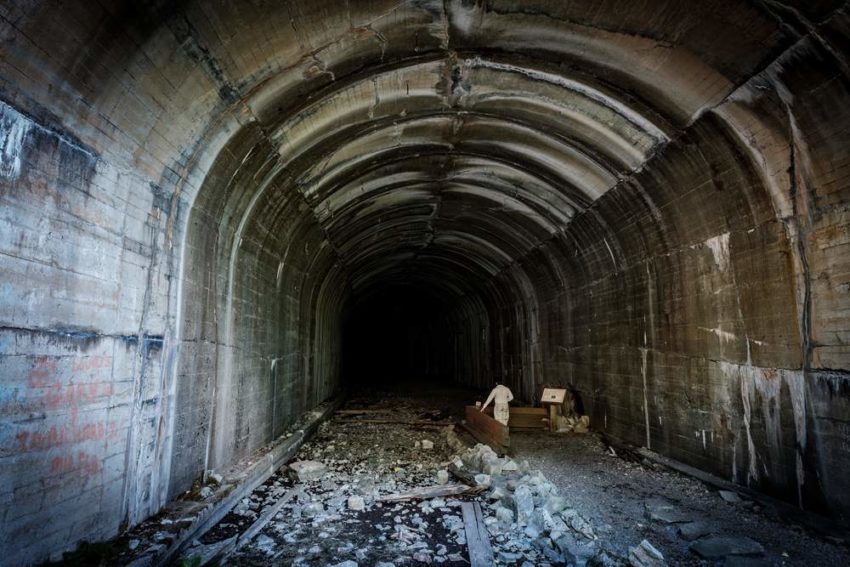 A hiker uncovers a haunted tunnel along Iron Goat Trail in May 2018. Get the scoop after the jump.

Tim* had been an active hiker for decades until he tore his ACL a year ago. Now healed, he headed out to Iron Goat Trail, which winds along the central Cascades, to get back to nature. The trail has a gentle rise and paths that range from a few miles up to nearly 8 miles long. For Tim, it would be perfect to test out his knee.

He decided to take the upper trail, which has a few steep points, and has overlooks of the mountains, river valleys and a few other historic landmarks. Namely, tunnels for the Great Northern Railway and the remains of Wellington, a ghost town.

He was a few miles along the trail when he approached a tunnel. You could walk 40 feet inside before a barricade and signs warned you to stop. He was a bit winded and his knee felt stiff, so this was a good spot to rest for a few minutes.

But, Tim was a curious fellow and he went over the barricade to the edge of a collapsed section. He could see the rubble piled up to the ceiling and it smelled like a rotting trees. Drips of water fell from the darkness and splashed on his head. It felt cool. He wiped the water off his forehead and adjusted his glasses.

As he reached for his cell phone to take a picture, he felt the ground drop a few inches and rumble. Could it be an earthquake?

Tim turned toward the opening. At forty feet or so, it would only take him a few seconds to get out, even with a stiff knee. He took a few steps, when he fell to the ground, cracking his injured knee on the tunnel floor. Tim rolled over to his side, wincing and grabbing his knee. He tried to stand, but had to roll over toward the tunnel wall to prop himself up.

As he stood, holding his knee, the rumbling sound got louder and louder and louder. He put his fingers into his ears to help soften it. Tim slid down the wall with his head between his knees. His knee seemed to creak like a rusty door hinge. The sound had stopped, but he could no longer breathe. Something felt like it smothered him and he began to freeze.

He mustered what he could take in for air and shouted for help. Luckily, a young lady heard him. She and a friend had stopped outside the tunnel to catch a breather, too. They rushed inside and found him curled up against the wall and only 10 feet from the barricade.

Tim didn’t try to explain what happened. He just said he was foolish to go inside. His 50-something body and injury caught up to him and he’d over-exerted himself. The young women helped him back to his Jeep and Tim has never gone back to Iron Goat Trail.

During February of 1910, blizzards covered Wellington, Washington with a heavy, wet snow. It piled up on the mountain slopes and became unstable. At 1 a.m. on March 1st, an avalanche raced down the mountains and crashed into the rail depot in town. The impact destroyed it and hurtled two rail cars down a ravine, smashing them and then smothering those trapped inside. Nearly 100 people died in the tragedy. The last victims were removed in July of that year.

Today, the park has closed most of the tunnels. Their ceilings have collapsed in many places and it’s no longer safe for hikers to go through them. You can still hike along the snow sheds, but don’t try to climb them. They, too, are near collapse.

Iron Goat Trail is part of the Mt. Baker-Snoqualmie National Forest in the Central Cascades region. Take Hwy 2 from Seattle toward Skykomish to get there.