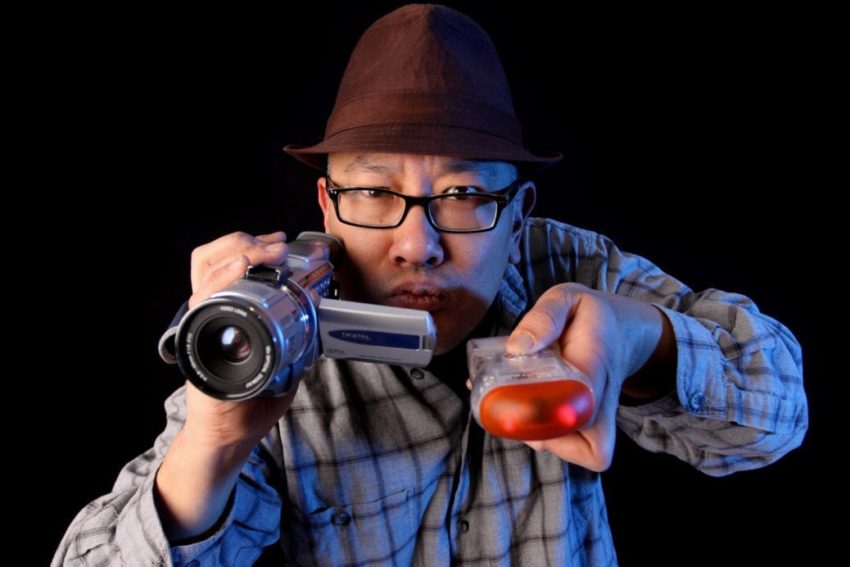 Updated on June 28, 2018 with some revised opinions on the gadgets.

Updated on Dec. 4, 2016 with more information on the equipment and our recommendations.

Remember, your senses are great ghostly indicators, but back it up with some documentation. That means you need sound and pictures to build your case.

Film cameras are going obsolete, BUT Polaroid Instant Cameras have been known to pick up ghostly evidence. This one may be worth a try.

Gotta have it. Digital cameras are easy to use and capture evidence very well. You can zoom in, change images settings like color and contrast, and the camera can detect the best settings for the conditions. This is a no-brainer. Now, you don’t need the most expensive camera and most sensitive lenses: We’ve captured great evidence with a Coolpix. Buy what you can afford. Clean the lens every 15 minutes. Remove the strap. Cleaning and removing the strap will reduce the number of false orbs and ghost vortexes.

We say you gotta have it with some reservations. First, these can be expensive devices. You can find some ghost hunting specific recorders on Amazon for under $300. But, the quality isn’t that great. If you do get a video recorder, get a full spectrum version, but many camcorders have a problem focusing with full-spectrum light. If you can, get one where you can manually adjust the focus. Second, video is the best way to show evidence. You can loop the evidence, zoom-in and out, and record audio. You still need software to edit it to just the evidence bits, so that’s an extra cost. Ghostly Activities uses iMovie, which comes free on a Mac. Third, most of the audio quality isn’t the best. In our experience, most camcorders with internal mics only record what’s right in front of the camera, so it may not pick up the EVP you get on an audio recorder. We generally pair an audio recorder with the camcorder and use the recorder’s file. If you put a shotgun mic or omnidirectional mic on your camcorder, you should be fine.

Gotta have it. Get a digital recorder and skip the tape version. Cassette tapes tend to pick up your hand movements and squeak. You don’t want the bogus audio hits to mask a ghost voice. The digital ones don’t have moving parts, so you’ll have better recording quality. Plus, you can upload the audio file into your processing software and edit out the empty air. You don’t need an expensive one. Amazon sells a Sony version for under $30. For more advanced ghost hunters with editing skills, go with a Zoom H1n. It sells for about $100. It is a great handheld recorder.

We’ve changed our minds on this part. For advanced ghost hunters, you could run experiments with the SB11, which searches through both AM and FM frequencies. We have captured disembodied voices with it on one ghost hunt. It’s worth trying, but don’t make it your main ITC device. If you use it, record your sessions with the H1n mentioned above.

We’re a bit torn on this one. Jake thinks you’ll get too many false positive readings because they pick up all movements like a bug. Saleen thinks they can help alert you to a manifestation. You could test it out on a hunt, but don’t buy too many of the units.

We do endorse REM pods. A REM pod monitors EMF and temperature changes, much like a MEL 8704-R with REM and ATDD, but it’s meant to be used remotely. When it detects something breaking its EMF field or quickly cycling temperatures, it gives off a LOUD alert. You could roam looking for other evidence, hear the REM pod, then run back to investigate the area you left it. We use it all the time.

Skip thermometers, but thermal imaging works well. Thermometers easily record false positives. These gadgets use a laser to record the temperature at a distance and around the laser. So, you can hit a window across the room with a big difference in the ambient temperature.

If you have a EMF meter with built-in thermometers, you could use that, but they’re slow to update changes. It also slows down EMF measurement.

You gotta have one! Okay, there’s nearly a dozen types you could buy, but we say the MEL meter is the best of the bunch. These have thermometers built into it and it has a red light flashlight so you can detect shadows. You can buy one on Amazon for about $100. If that’s too steep, you can get a Ghost Meter and K2 meter for $50 – $75. These two devices are very sensitive to manmade EMF, so you need to debunk the source as fast as possible.

For advanced ghost hunters, we’d recommend the natural tri-field EMF meter. They run about $150-$200. This meter only detects direct current and filters out manmade EMF changes (alternating current). If the natural meter goes off, then you may have stronger evidence of something ghostly manifesting. We take this gadget on all our investigations.

This one’s a change of opinion. At first, we totally disagreed with using radiation detectors like geiger counters (Note: EMF meters also detect radiation, but not the full range). After seeing geiger counters on ghost hunts, we’ve seen them pick something up when the team also caught EVPs. Their MEL meters didn’t detect anything. These devices aren’t cheap: We didn’t find any that cost less than $170, but it could be worth it to have one device on the team. Treat it as an optional device.

We don’t have this gadget, but we’ve seen it used on a few hunts. It measures the number of ions in the air and their positive and negative charges. If a ghost manifests, it could change the density and charges in the air. These devices get expensive, depending on their sensitivity. The version used by ghost hunters (pictured) costs more than $500. Treat this one as an optional gadget.

Gotta have it! When your EMF meter’s batteries fail, a compass can help detect the energy change when ghosts manifest.

Gotta have it. You never know when you’ll need one of the tools in this. This is especially true if you’re the tech manager on the team and you have to open a gadget to fix it.

It’s optional. A lot of investigators like to take notes about a haunted location or what they’re feeling. You could use your phone as a recording device for this and use the dictation feature (on iPhones, use the Voice Memos feature under Extras) . If you have a command center, it will record most everything you need to know. Still, it’s good to have a hard copy if something happens to your digital files.

It’s optional. We’ve put down powder to see if any human footprints appear to debunk something or see if the haunting is really a hoax. You don’t need it, but we say bring some if you think someone’s trying to pull of a hoax.

Skip it. Use it if you need it to clear a spirit. Never use incense on a ghost hunt because the smoke will cause a matrix. You don’t want that.

For sure. Bring a lot of them. Stuff your pockets with batteries. If there’s really a ghost present, you better believe your equipment will get drained by it.

We’ll update this post over time with more equipment.