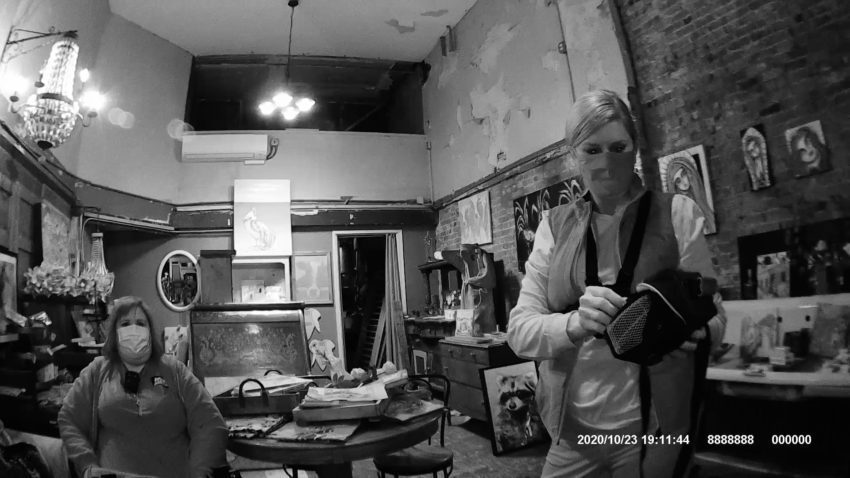 On October 23, 2020, AGHOST investigated reports of a touchy spirit in the Urban Farmgirl Market. The store lies in the former Wilson Hotel. Get the report after the jump.

In the 1980s, “Dutch,” the long-time owner sold the building. It became low-income housing during the 1990s, and one person died in the building. It appears the man died of natural causes. In 2001, the City of Centralia seized the building from an alleged slum lord. Finally, in 2014, new ownership remodeled it for business. Urban Farmgirl Market opened in 2018. The third and fourth floors are currently being renovated to become apartments.

Urban Farmgirl owner, Ms. Dottie Blackstone, invited AGHOST to investigate her store. The shop was the final stop during the 2020 Centralia Ghost Walk.

You can read more about the hotel’s history from The Daily Chronicle report.

Ms. Blackstone, her daughter and shoppers have reported the following activity:

AGHOST began with a walkthrough to capture baseline readings throughout the building. The team had full access to the former hotel. Members investigated from the basement to the the top floors.

For the initial site readings, Ross and Jake used a Mel 8704-R-REM-ATDD, EDI+ and body cameras to record the sweep. Ross also wrote down oddities and locations in an investigation journal.

Overall, temperature was consistent per floor with some variability on the 2 upper floors. The basement had readings in the upper 50s. The gutted top floors had temperatures from 55°F to 60°F. It depended on how close you were to the windows.

There wasn’t much change in EMF in the basement and main floor. The basement peaked at 0.3mG while the main floor, with the Urban Farmgirl Market, had some spots with 1.3mG. Those spots were close to power outlets.

In the hallway, which led to the basement and stairs to the hotel rooms, there was a power bank for the entire building. Not surprisingly, it had EMF that ranged from 0.8mG to over 30mG.

In the old hotel rooms, there was still original wiring as well as newer wiring for the renovations. The EMF would cycle from 0.3mg to 3.7mG for the older wiring and switches. Newer wiring had less than 1mG fields.

However, one section of the third and fourth floors did have an odd ambient EMF. It cycled between 0.3mG and 1.1mG. It turns out the field was generated by a power line that ran along Maple Street. The hotel’s interior readings matched the line reading.

During the baseline sweep, Ross and Jake heard what sounded like whispering on the 4th floor. Jake’s body camera did not capture it. It matched Ms. Blackstone’s reports of whispers on the main floor.

The team split up to investigate different areas. Ross and Jake went to the old hotel rooms, while June and Suzanne focused on the Urban Farmgirl Market shop.

Upstairs, Ross and Jake set up the Cannon XA11 and a series of LED balls in a hallway. The LED balls only trigger if picked up or moved in a significant way. Over a 30-minute period, the two investigators captured movement as the LED balls flared as shown in the video below.

Jake then placed an EDI+, Zoom H2n audio recorder and a GS2 laser grid system in the hallway. You can see their lights after the video transition (a blur effect). He also had a 360° motion detector to the right and a Mel 8704R-REM-ATDD meter behind the 2 investigators.

The motion detector and Mel meter did not trigger during the activity. Investigators did not capture any EVPs or DVPs during the 4th floor experiments. The GS2 noted some temperature anomalies, but neither its motion detector, nor its proximity sensor, flared. The team used an EDI+ to record environmental anomalies, but the data has not been analyzed at the time of this writing.

Ross and Jake moved to the third floor and setup a similar experiment as the fourth floor. They did not capture any evidence of a haunting here.

June and Suzanne currently review their data at the time of this writing. This report will be updated as evidence becomes available.

AGHOST thinks the restoration on the top floors may have ‘woken’ something up. While the ghostly movement on the 4th floor is promising, AGHOST needs to review more data before they can provide a conclusion. Keep watching this report for more!

One thought on “Ghost Hunt | Wilson Hotel in Centralia, Washington”