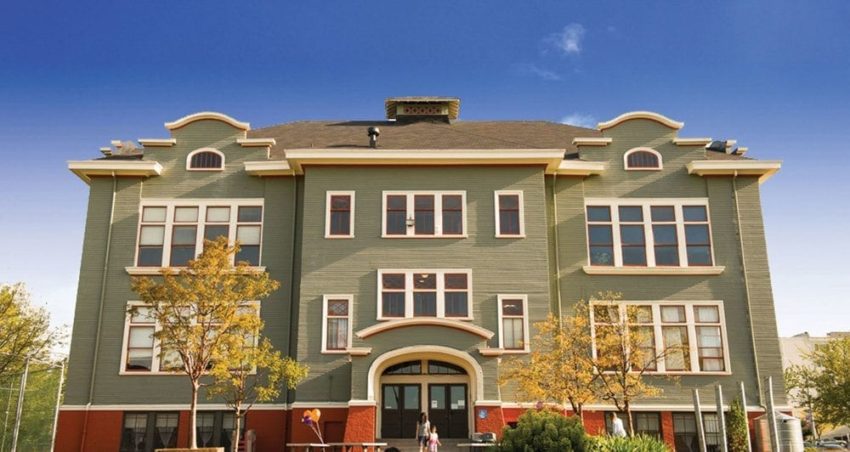 Ghostly Activities investigated the University Heights Center in Seattle, Washington and captured evidence of a male ghost in the basement.

The University Heights Center opened 1902 as an elementary school. It was open until 1989, then it closed until a few years ago. A couple of years ago, contractors rehabbed it to become the community center we know today.

During its history, there was one tragic event. A teacher allegedly locked a misbehaving student in a closet. She forgot about him and left him there for a weekend. The boy, named Brian, died in the closet. Today, witnesses have seen his ghost in one of the classrooms.

We scheduled the ghost hunt for Saturday, August 20, 2016. It began at 10 PM and lasted until midnight. This is a live ghost hunt offering by Spooked in Seattle, a well-known paranormal group in Seattle.

Spooked in Seattle provided details on 4 haunted hot spots in the school:

Then, Spooked in Seattle staff trained people on how to use some ghost hunting equipment. They provided a few Gauss meters and laser grids.

For equipment, Ghostly Activities had the following items on hand:

We began the ghost hunt in the stage room on the top floor.

Ghostly Activities’ first investigated the stage room and the waiting area outside its entrance. The group set out to capture any possible shadows, EVP, temperature changes and apparitions. Overall, the room had 0.4 mG ambient EMF level. This is well within normal conditions.

Saleen took charge of EVP, asking about 30 questions during the 20 minute stop. The questions focused capturing child ghost responses. For example, she asked questions to get a name, if the spirit missed their mother, and why they stay at the school. Saleen did not capture any EVP in this room.

We also used a laser grid to find shadowy figures. The grid didn’t detect anything, and it broke after we left this room. We could no longer use it for the later points-of-interest.

On the stage, we placed an EDI meter on the stage. During the twenty-minute allotment, the temperature rose 2.8 degrees to 81.7 degrees. Normally, a ghostly manifestation would happen in less than 30 seconds. We don’t think it indicated anything paranormal. The meter didn’t detect any movements, nor any EMF changes.

However, Jake picked up increased EMF in the waiting area just outside the stage room doorway. Using a MEL meter, he captured an EMF increase that happened within 30 seconds. It rose from 0.4 mG to a sustained 1.1 mG. It peaked at 1.7 mG for a minute, then decreased to 0.4 mG. He also used the MEL meter’s red light to scan for shadows, but he didn’t capture anything unusual. Jake also used a Tri-Field meter, set to Electric, to find AC/DC leaks to debunk the EMF changes. There were none found.

Throughout the room investigation, we used an infrared camera to capture any apparitions, ghost lights or shadowy figures. We didn’t capture any at this spot.

At this time, our coordinator came to take us to another point-of-interest, the principal’s office.

We had high hopes for this place, and we collected interesting EMF readings. We set up the room with the EDI meter on a sink. The windows opened to the street and the noise polluted the audio. Unless we had a clear EVP, we would have to debunk any audio hits.

Nonetheless, Saleen ran the EVP session like the stage room, but she didn’t capture any ghost voices. However, she did get psychic flashes in the room. She could sense something in the room, but she couldn’t tell if it was an adult or child ghost.

The room temperature did increase by 3 degrees, much like the stage room. We would debunk this because there were six people in a small room: It’s very possible our combined body heat could elevate the temperature. The EDI meter didn’t detect any EMF changes or movement.

Jake got large EMF changes in the office. In the doorway leading to a toilet, the EMF increased from 0.4 mG to 5.2 mg, with a peak at 6.7 mG. He confirmed the shift on the Tri-Field meter. He also use the Tri-Field meter to test for AC/DC and other man-made reasons for the EMF increase. The EMF reading went up in less than 30 seconds and held for over 5 minutes. Jake moved the EDI meter to the floor in the doorway to test for ghostly engagement. We didn’t capture anything with EDI meter, nor with the infrared camera.

The next point-of-interest was in the basement.

In the basement, we went to the Boys’ Room and an adjoining fan room. It was also used to store extra supplies, sinks and toilets for the University Heights Center.

Only 3 people could fit in the room. Jake set the EMF meter on a table by some HVAC ducts. He set the red light to shine on the far corner behind a large mechanical fan. Witnesses have reported seeing shadow ghosts in this room. The light didn’t show any shadow-like activity during our stay.

Saleen ran another EVP session and used some provocation questions. She sensed an adult spirit in the room, but wasn’t sure if it belonged in the Center, or it was visiting.

Her questioning led to the capture of the EVP below:

The EMF remained stable at 1.1 mG  and the temperature held at 78 degrees. We had no indications that a spirit was present in the room. None of our ghost detection equipment caught it. Only Saleen’s psychic gifts noticed a ghost.

We also tried to detect changes in EMF, temperature and capture apparitions in the Boys Room, but found nothing.

The classroom where Brian’s ghost manifests was our last stop for the evening.

UPDATE (July 21, 2018): Ghostly Activities returned to the fan room and captured some interesting magnetic readings on the MEL 8704-R-REM-ATDD. We could not debunk the source of the strange energy because none of the fan equipment gave off that kind of energy. In all, the magnetic signature lasted about 10 minutes (9:15 p.m to 9:26 p.m.).

We did not capture any EVP or temperature variations. Our EMF meters did capture high–and fluctuating–energy levels by the door and where we placed the GoPro camera. They shifted from 1.7mG to 15mG over a period of 20 minutes.

UPDATE (December 21, 2019): Ghostly Activities returned to the basement and ran a series of tests using a Boo Buddy Interactive, GS2 Laser Grid System, EDI+, SLS Kinect, Q2n 4K video recorder, and a Sony 4K Nightshot camcorder. We captured a series of EMF, temperature and vibration anomalies. We tried to debunk the causes using other gadgets, like a natural trifield meter, but could not. These events happened at 11 p.m. and lasted approximately 5 minutes.

This is the place we most wanted to investigate. Witnesses had reported to seeing a boy’s ghostly apparition in it on a few occasions.

For setup, we placed the EDI meter and a ping-pong ball in the middle of the floor. Saleen would sit about five feet from them and run an EVP session. Our goal was to capture the ball moving or the EDI meter detecting ghostly touches. Jake would use a MEL meter and Tri-Field meter to detect any changes in the other parts of the room.

This room, on the main floor, faced the street. We would have to debunk most of the audio because it picked up noise and voices from the street.

Saleen began an EVP session, this time without any provocation questions. She asked the spirit to touch the ping pong ball or the EDI meter. Nothing happened and she didn’t sense any spirits either.

But the EMF meter detected strange readings along the wall that connected with the school’s main hallway. The ambient room EMF measured 0.7 mG, but it increased to 5.6 mG or higher along the wall. Jake used the Tri-Field meter to debunk it. The readings didn’t seem related to AC/DC leaks. No other parts of the class room had spikes like it. By the time we ended the room investigation, the EMF had settled at 0.7 mG again.

When our coordinator entered to tell us to wrap our investigation, Jake asked her about the EMF increase along the wall. She confirmed that she had captured  the spikes as well, but didn’t know what caused them. Since it happens often and with similar increases, the EMF levels are likely man-made and not paranormal.

Do we believe its haunted? Probably. We did capture a Class B EVP in the basement. The EMF readings and temperature changes do not prove a ghost haunts the Center’s halls. We also didn’t get any ghostly pictures. If you ever collect EVP AND pictures, you have found a haunted site.  We’ll go back and investigate again.

All other photos by Ghostly Activities

One thought on “Ghost Hunt | University Heights Center in Seattle”