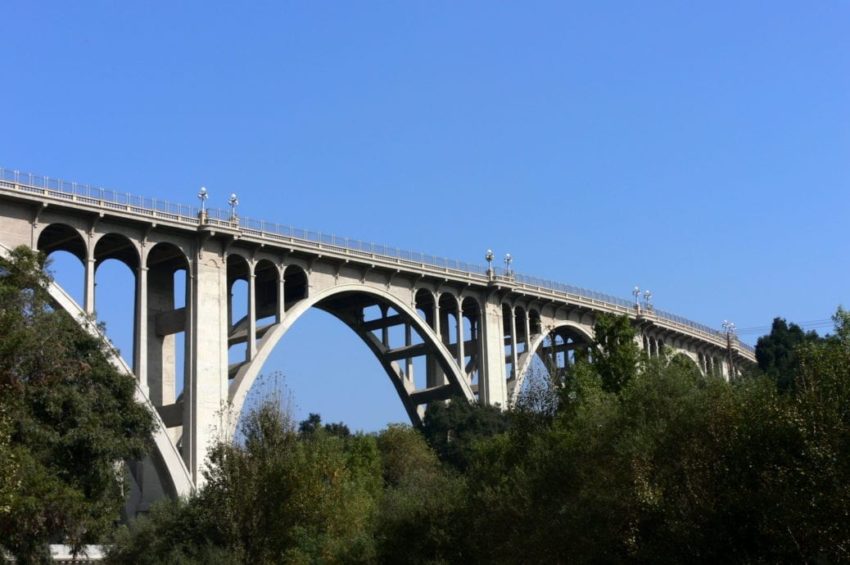 Colorado Street Bridge, more infamously known as Suicide Bridge, has been the spot of more than 150 deaths. The most recent happened in May 2014. We got some startling visual evidence on the top of the bridge.

This is a 2-part investigation. We began in the Arroyo Seco wash area, the forested area under the bridge, then moved to the top of the bridge.

We primarily focused on the wash area and areas under the overlooks above us. This would be the areas where the victims would land after their jumps. The MEL Meter recorded a stable 0.2mG throughout the entire investigation. There were a few notable spikes (more on that later). The K2 meter remained under 1.5mG the entire time at Arroyo Seco. Our EVP analysis continues and we’ll release any findings under a new post.

We used the infrared digital camera for most pics taken under the bridge. We’ve found it better captures ghostly elements than the color digital camera. We did not capture any apparitions or possible ghosts with either camera. However, our image processing software did find some anomalies during the image analysis. It detected faces or figures we couldn’t see. These are posted below:

The equipment didn’t pick up many changes in temperature and EMF in Arroyo Seco. We did capture some interesting spikes when Saleen and Coleen, a psychic medium, teamed up. During the investigation, Saleen and Coleen detected a few spirits in the area. One was a very angry prostitute, who refused to give her name. The MEL meter surged from 0.2mG to 1.4mG when Coleen claimed the spirit yelled at us. It spiked again when the spirit wanted us to leave. Coleen stated the spirit in question was murdered and dumped in Arroyo Seco at some point in the 1920s or 1930s. Jake will research that claim through the LA Times and Pasadena Sun archives to confirm.

Saleen and Coleen also connected with a few other ghosts, including Hal, Robert and Michael. All committed suicide before the 1970s. Jake will also research this. The one obstacle is the victims’ names. Most of the newspapers did not give the suicide victims’ names in print.

We moved to the top of the bridge at 3 PM PT. The EMF remained stable at 0.9mG. This seems higher than normal ambient EMF, but it could be a combination of the heat and the wiring for the overlook lights. We did measure the lights and the electrical panels and they seemed to be well grounded.

The wind was much stronger at the top and it made EVP difficult. Most wind speeds measured above 10 mph. The background traffic noise and wind made the audio file unusable.

We did not get any EMF spikes or temperature changes to indicate the presence of ghosts. EMF remained stable at 0.9mg and the temperature remained a steady 97(f). We did capture 2 interesting photos, simply because we were the only people on the bridge for this part of the investigation.

Here are the interesting pics:

We also captured a woman in a black dress walking on the bridge, but we were alone. Only the infrared camera (using color setting in this case) captured the woman.

The other camera used, a Nikon Coolpix camera, didn’t register the woman in question, but the Black & Howell infrared camera did. Obviously, we took the picture in the color setting.

To give you more context, the two pictures were taken within 10 seconds of each other. Jake took the infrared pic with something squatting; changed the setting to color; and, took it again and the woman appeared.

We also took pics with our iPhones, but didn’t capture the squatting entity and the possible female apparition.

Moments before we took the pics, Saleen and Jake felt a deep sadness at a nearby overlook. We marked them in this photo for you:

In all, we spent 4 hours investigating Suicide Bridge. Jake will post a separate photo gallery for you to review the pics. You may see something we didn’t.