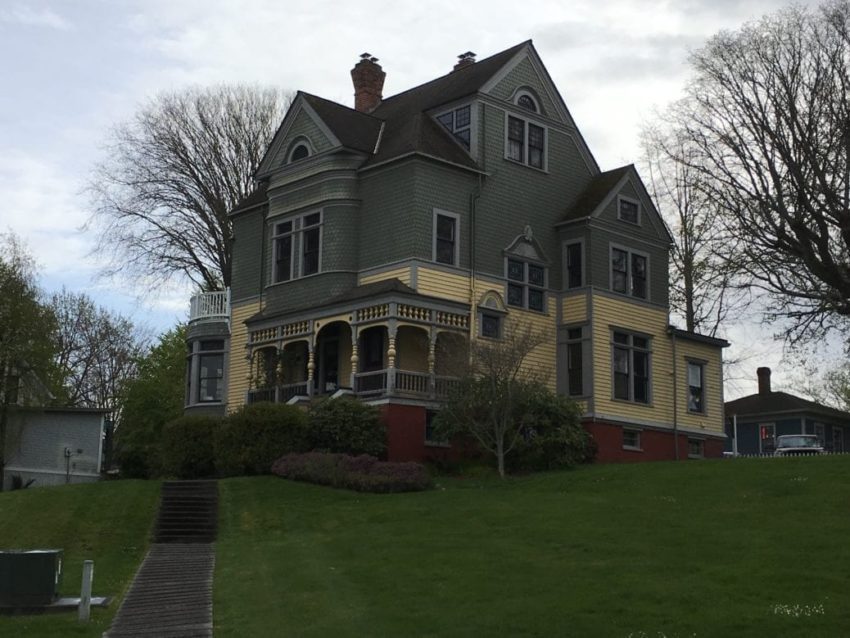 On Saturday, April 21st, Ghostly Activities and AGHOST teamed up to investigate 2 haunted locations in Port Gamble, Washington. Get the scoop after the jump.

AGHOST coordinated the investigation and focused on 2 haunted hot spots, the Walker-Ames House and Buena Vista Cemetery. Both have long histories of ghostly activities.

Eight members from both teams were on site and ready to go. We broke up into 3 groups to investigate different spots in the Walker-Ames House and cemetery. Ghostly Activities and AGHOST member, Bob, started in the attic.

In the attic, a selection of toys were laid out. They act as trigger objects to get the ghost excited and want to interact with investigators. The attic is known for having a child ghost (or more) present and actively engaging with paranormal investigators.

We spent 36 minutes in the attic. Jake from Ghostly Activities added a Boo Buddy and MEL Meter with REM-ATDD to increase the odds of interaction. Jake also used a full-spectrum camcorder to record the session. The two interactions in the video happened 13 minutes and 21 minutes into the investigation. We believe a ghost may have touched the yellow caterpillar toy and manipulated the Boo Buddy. When Jake got downstairs, he checked the gadget. The battery was no longer attached to its snap connector. It had been in place before the engagement session.

Otherwise, we noted a 3°F decrease in temperature (52°F – 55°F) and a few scuffling sounds behind us. Update (April 25, 2018): We did not capture any EVPs during this part of the investigation.

AGHOST and Ghostly Activities went to the basement next. Other teams have stated a spirit had played with women’s hair and liked to play with coins. When we arrived, we noted 2 investigators had setup their own experiments. One used a pendulum (seen in video above) and coins on a chair to see if the spirit would move them. The other investigator had set up a 360° infrared camera to track movement in the basement.

Jake brought some more gadgets to see if they would capture any activity in the corners of the large, dark area. Besides using the full-spectrum camcorder, he placed the following equipment in the corners:

Jake also wore a red-light headlamp to sweep for possible shadow figures, a common ghost type in the Walker-Ames house.

We didn’t capture anything of note on the equipment. Again, there was a 3°F fluctuation in the basement. It would shift between cooling and warming. The gadgets didn’t record any environmental changes, either. While the audio review continues, the full-spectrum camera’s infrared light did malfunction and most of the video was captured with blue-green light. The camera had just worked correctly in the attic, and it worked correctly again at the command center in the kitchen. Also, the camcorder battery showed it was nearly drained at the end of the 30-minute session. Upstairs, it read fully charged.

Update (April 25, 2018): We did not capture any EVPs during this part of the investigation.

Ghostly Activities made two trips to the second floor. The first was with AGHOST members, June, Bob and Lori. For this session, the team went to the yellow bedroom and conducted an EVP session. Then, we moved into the master bedroom. June had previously set up a full-spectrum video camera and audio recorder.

Jake also had a personal experience near the master bedroom.

For more context, in October 2017, Jake investigated the Walker-Ames house with Ghostly Activities associate, Erin. Both noted they felt nauseous and had discomfort (like a migraine coming on) in the bathroom between the yellow bedroom and master bedroom. Jake had a similar experience this evening. It felt like someone pressed on both his temples, the hair on his neck stood up, and he felt a strange buzz, like static electricity, on his arms.

Later in the night, Jake joined Josh, David and Bob for another trip to the second floor. They ran an EVP session and recorded a closet that’s known for an apparition. After that, the group headed to the attic to run another engagement session like the first video in this post. Again, there was a 3°F temperature change in the attic.

Before Ghostly Activities and AGHOST set up for the investigation, June interviewed Pete Orbea about recent hauntings in Port Gamble. He claimed to see child-like shadow figures running quickly along the cemetery’s fence. He also mentioned some activity near a hill just in front of the cemetery’s entrance. Native Americans had used the hill for rituals before Europeans settled in Port Gamble.

Jake, June and Bob proceeded to run EVP sessions and scan for shadows with red light. There were some interesting EMF changes, but those could be debunked: A power line runs under the cemetery, not far from its entrance. On the hill next to the cemetery, June ran another EVP session, but this time Jake played Native American songs, specifically the local S’Klallam Tribe chants, to see if we would get an EVP response.

Update (April 25, 2018): We did not capture any EVPs during this part of the investigation.

Port Gamble is known for its haunted sites. The Walker-Ames House and Buena Vista Cemetery have many documented cases of paranormal activity. We don’t doubt it’s haunted. We just want to go back soon and run more experiments.