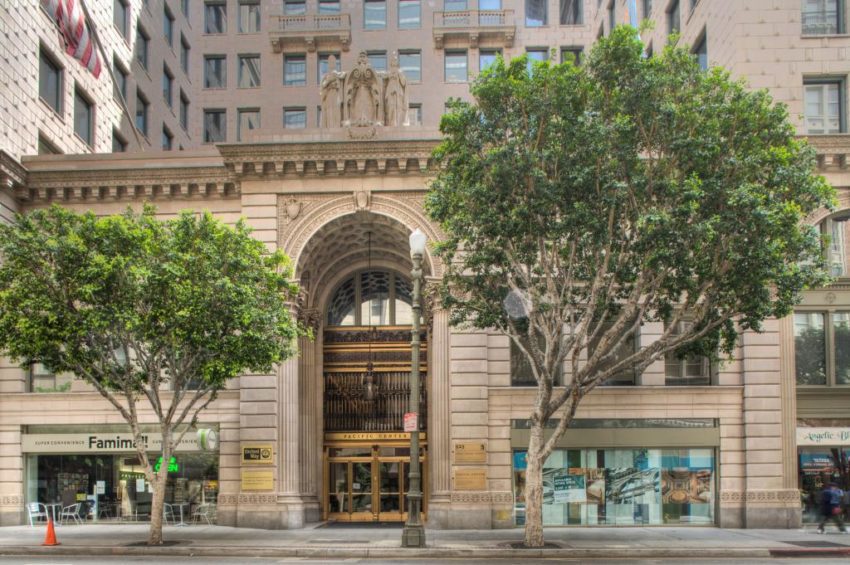 Ghostly Activities investigated possible paranormal activity at the Pacific Mutual Building in early May. This is what we found.

The building is actually 3 connected structures, built at different times. The oldest wing, which faces Pershing Square in Downtown Los Angeles, was built in 1908. It’s also known as the Clock Building. Ghostly Activities used this building for our investigation.

The other 2 buildings, Sentry Building (opened in 1921) and Carriage House (opened in 1926) have no urban legends or haunting stories, so we ignored them.

There is one tale of a 7-year-old girl–in Victorian Era clothing– haunting the Clock Building on the 6th floor. We also heard some instances of her haunting the boiler room and storage room. We believe this to be an urban legend. We found no documentation in the news or historic archives to indicate a little girl died in the building.

We focused on the areas where the ghost appeared from oral reports:

We began the investigation at 6 PM on a Tuesday evening and spent one hour in the hallway. We did not capture any evidence of a haunting. The MEL Meter never recorded any EMF recording over 0.3 mG and we captured no EVPs.

We began the investigation at 3 PM on a Wednesday afternoon and we spent an hour in the small room. It’s a creepy space, but that doesn’t mean it’s haunted. We also did not capture any evidence here. There were no EMF increases and no EVP. We did think it was odd that such an old building has such good shielding. You could point the MEL Meter on power outlets and machinery and get a 0 mG reading or just a blip. The MEL Meter did work because we tested it on our iPhones, and it did pick up the EMF surges when the phones turned on and we made calls. The meter surged above 5 mG when tested on the phones.

We began our investigation at 5 PM on a Wednesday afternoon and finished by 7 PM. The storage room is small and the layout made it difficult to walk around and sweep for anomalies. We focused on EVP collection, but found nothing. We did get a few blips on our EMF meters and none of them was greater than 0.3 mG.

We don’t think the building is haunted. It’s just an urban legend.