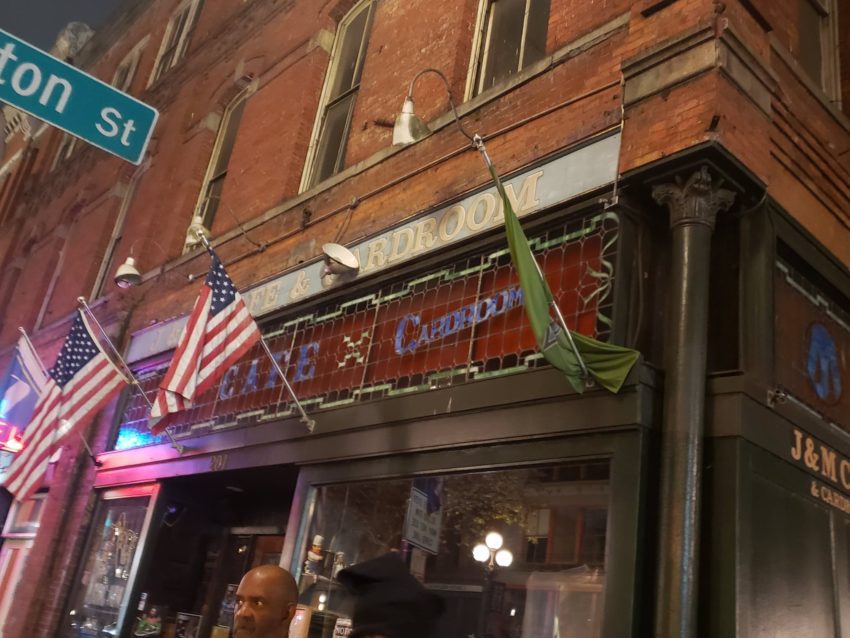 AGHOST investigated the J&M Cafe in Pioneer Square in early November 2019 and captured ghostly engagement in the Seattle Underground. Get the scoop after the jump.

J&M Cafe was one of the first buildings built after the Great Seattle Fire of 1889. It opened as the J.H. Marshall Building, named for Captain James Marshall. It was meant to be a utilitarian building and house different business offices.

But that changed quickly.

By 1896, it had become the J.M. Hotel when the Alaska Gold Rush hit. The hotel had 2 floors, but a third was added in 1900. The architects, Comstock & Troetsche, were responsible for quite a few of the hotels along 1st Ave as the city rebuilt itself.

Change has been constant for J&M Cafe. It morphed into a saloon between 1906-1916; then a card room until the laws changed and shut it down. During Prohibition, it became a cafe to serve ‘soft drinks.’ In 1936, it shifted back to being a hotel and remained so until 1970.

J&M has been its common moniker since it was a saloon in 1906.

It’s also had its share of chaos. More recently, it’s changed hands 3 times since 2009 due to bankruptcies or unpaid taxes. In October 2019, it abruptly shut down and now sits idle with its ghosts locked inside.

Only Spooked In Seattle has the keys to an Underground section in its basement.

AGHOST investigated J&M Cafe on November 1, 2019. The team focused on the Underground (or basement) for most of the night. Pioneer Square had a busy night: There was street noise from traffic and pedestrians.

For this investigation, AGHOST remained in J&M Cafe’s basement, which is a large section of the Underground. This section has a tunnel-like structure, where you can see the former sidewalk in its ceiling. Along the wall, you can find a painted billboard that’s over 80-years’ old, based on its design. Also, the basement has quite a bit of unused restaurant chairs, tables and appliances stored there .

It’s also where the world-famous EVP was captured by a previous AGHOST investigation.

The team captured a few occurrences of ghostly engagement. First, June Nixon had her hair twirled by an unseen force. It left the hair on the backside of her head sticking out and twisted. She was not injured by this activity.

Second, TammyLynn, Ryan and Melissa caught phantom footsteps and heard billiards, while no one was in the bar above. The investigators entered the falafel store and stomped the floor to test for a natural reason. Their actions did not create the same sounds. They also checked the surrounding area for people who may have caused the sounds. No one was present around the building.

Third, investigators saw EMF hits on a K2 meter as they ran an EVP session.

Over 6 years ago, AGHOST had full access to the building. They focused on the former hotel, which was on the second and third floors. No apparitions were captured, but they did encounter a heat anomaly. At the time, the building’s baseline temperature hovered around 50°F. The heat anomaly was at least 15° warmer. Ross Allison felt it on the second floor.

During this investigation, June Nixon and Ross Allison (AGHOST’s founder) collected the EVPs below:

How You Can Investigate J&M Cafe

One thought on “Ghost Hunt | J&M Cafe in Pioneer Square”